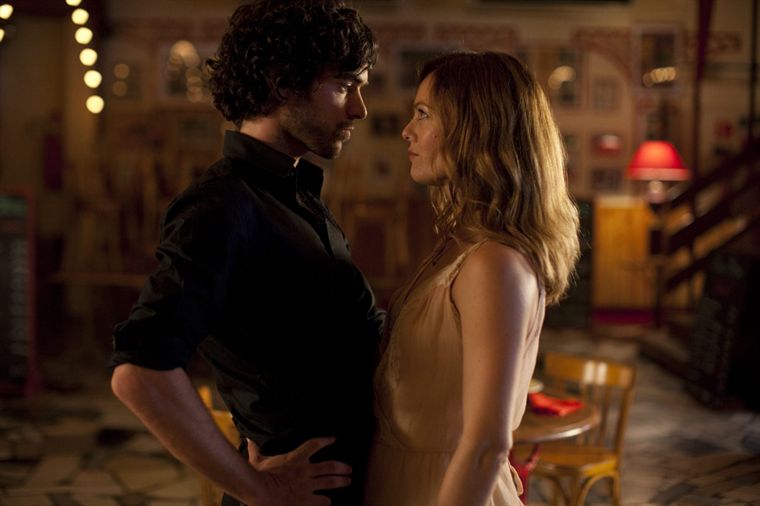 The Lavender Hill Gang, Dirty Rotten Scoundrels, A Fish Called Wanda, just to name a handful. These films, balancing crime with comedy, work so well because they contained the telltale results of a very specific talent: namely, a peculiar attention to behavioral rhythm. It’s the same skill that can be observed in a mystery master like Donald E. Westlake, who could oscillate between his Dortmunder novels (light comedy) and his Parker novels (wonderfully callous and crisp page-turners!) precisely because he was so committed to portraying every motivation, every nuance, every nicety behind the gambit.

Heartbreaker — a title bearing Benatar allusions, but which I assure you is a French film — doesn’t explicitly deal with crime. But it does concern itself with a close cousin: deceit within the private sector. And even though this charming French comedy contains a rather absurd storyline (three people are privately commissioned to split up relationships; they have a 100% track record at this) and a rather absurd setting (mostly Monte Carlo), it manages to slough away these implausibilities due to its commitment to a post-Lubitsch presentation of an illusion along the lines of Westlake.

Screenwriter Laurent Zeitoun* and director Pascal Chaumeil get us interested by establishing how these three operatives work in a lengthy pre-credit sequence photographed partly from the mark’s vantage point and partly revealing the ruse. The mark here is a woman on holiday who wants to see the dunes. Her boyfriend is more preoccupied with lying by the pool and contemplating the possibility of a wet t-shirt contest. A dashing young man offers to driver her out to the dunes when layabout bf fails to fulfill his pledged transit. Said man (who we later learn is named Alex) mentions something about his dead partner. He offers “treatment” to indigenous kids, which we see to be a staged sham. Alex is romantic to the woman in ways that her present partner is not. We later understand that he recites the same lines, eliciting the same response.

Since a relationship can be essentially dissolved by several lines of code, we’re left wondering if this is some kind of bizarre cinematic conceit. Particularly since none of Alex’s women can detect the ruse. (Indeed, they remain completely understanding why he cannot enter a relationship, even after his anemic yet precise explanation.) So is it the specific turf that Alex is working? Is Alex’s Eliza-like heartbreaking some statement from the filmmakers on the folly of love or the silliness of narrative? Is his inflexible script sustained by the fact that he has two able accomplices capable of donning costumes and roles to impede upon this presentation of reality?

Whatever the reasons, we’re swiftly entertained by Alex and his petty heartbreakers. And this human interest is aided by some not bad casting. As Alex, Romain Duris is competent. But there’s the wonderfully expressive Julie Ferrier (one of the best elements in Micmacs) playing Melanie, Alex’s sister, able to infiltrate a hotel desk faster than a speeding locomotive and Francois Damiens as Marc (married to Melanie), who has been looking for the perfect assignment to try out his own problematic roles.

The films storyline hinges upon whether this trio can split up a very perfect couple in ten days. Juliette (Vanessa Paradis) is a 30 year old wine expert who is marrying Jonathan, a seemingly perfect Englishman, in ten days. (Indeed, Jonathan is so perfect that he donates his doggie bag to the trio, momentarily bedecked in sloppy apparel and confused as vagrants.) In other words, here’s another cliched case of whether an expert can succeed at his toughest assignment, with the additional cliché of Alex falling for Juliette as the job carries on and yet another additional cliché of Alex owing a considerable amount of money to the mob.

Yet I enjoyed the movie as a form of stylistic escapism. Not because of the storyline, but because – much like Micmacs – I was more interested in how the filmmakers would sustain the illusion. There is one funny scene in which Alex, pretending to be Juliette’s bodyguard, insists that he has no feeling in his leg. He claims that it’s the result of an injury. This doesn’t stop another character from stabbing his leg with a fork in order to test Alex’s resolve, leading Alex to wince off the pain. And in an effort to find some connective point with Juliette, Alex preposterously claims that he’s a fan of George Michael and Dirty Dancing (two of Juliette’s cultural interests unearthed during Alex’s research). The former is unconvincing, but the latter results in Alex learning the moves for the film’s final dance in his hotel room and the eventual recreation of said routine. I’m hardly a Dirty Dancing fan (no fault of the dearly departed Patrick Swayze, but I recall much male shouting in video stores on the subject circa 1987), but I was both amused and troubled by the idea of cultural reenactment as a method to win a woman’s heart. I mean, how sad is that? I could buy this behavior from twentysomethings. But these people are professionals in their thirties. And when one considers the deceit motivating Alex’s Swayze replay, if you’re anything like me, then you may very well be able to kickstart some ethical debate with your date for this date movie.

The film does ultimately present a less fabricated form of love (outside Marc and Melanie’s marriage), but this “genuine” presentation isn’t nearly as interesting. I kept hoping that this film would go the distance, portraying Alex as a man who sadly can’t see any option but deceit, even in his non-professional obligations. A coda more befitting its con.

* The press notes offer this oddly phrased CV-like tidbit for Zeitoun: “Visits Paramount Studios in Los Angeles and discovers the profession of screenwriter.” This leads me to wonder if folks now visiting the City of Angels now observe lavish naumachiae bankrolled by Hollywood studios, with the spectators invited upon three Spanish ships to discover unexpected vocations when they aren’t looking for escape routes leading to the West Indies.