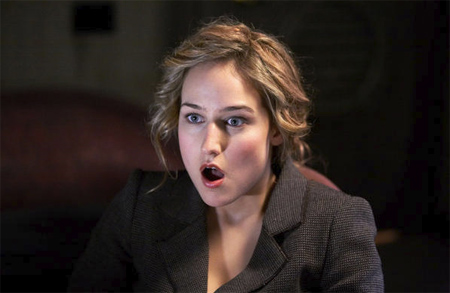 It’s become increasingly impossible for any movie, whether mainstream or independent, to depict the porn industry with anything approaching accuracy. Show a penis — even a flaccid one — and you’ll be given the NC-17 stamp of death. Show any sexual act and, as the 2006 documentary This Film is Not Yet Rated sufficiently demonstrated, be prepared to get into a lengthy censorship battle with the MPAA. But feel free to maim or kill another human being and you’re likely to garner a PG-13. One of the ongoing hypocrisies about American culture is that violence remains fun for the whole family, while any hint of sexuality is considered Puritanical. Sex isn’t strictly verboten. Just don’t expect to get your film distributed within the present system.

In Finding Bliss, writer-director Julie Davis — who mined similar territory in Amy’s Orgasm — does her best to work her material around this problem, visualizing her adult entertainment production company (Grind Productions) as a locale with screwball possibilities. (It can’t be an accident that a poster of My Man Godfrey hangs in the main character’s apartment.) Leelee Sobieski plays Jody Balaban, a fresh film school grad who did not remind this writer of the actor Bob in any way. She can’t get a job. Even Garry Marshall (playing himself) won’t return her messages. She needs to make her movie, but she isn’t quite willing to pay her dues. Yet despite this steadfast drive, Jody proves quite diffidently vanilla in her sexual attitudes. She gets an editing job at Grind, figuring that she can secretly make her film at night using the surprising resources at her disposal at night while cutting together banging during the day.

Davis’s film is somewhat entertaining. She’s helped in large part by her cast. Sobieski has been rightly heralded as a serious dramatic actress. It’s a pity, however, that this very talented actress isn’t cast in more comedies. Even when asked to go needlessly over-the-top in a few reaction shots, she manages to sell her character’s pigheaded predicament without coming across as needlessly steely. (Had Katherine Heigl been cast in this film, Finding Bliss surely would have been a disaster.) We very much believe in Jody’s hangups, even if we don’t quite believe in the material. Matthew Davis is also pretty good, imbuing his character with a cocksure unctuousness. The criminally underemployed Kirsten Johnston, whose snappy quirks haven’t quite been understood by casting directors since 3rd Rock from the Sun, is also on hand as a co-worker. Even Denise Richards, who is best known for bimboing it up ten years ago, daringly announces to Jody (and the audience) near film’s end, “I’m a better actress than you thought.”

So Davis has cast well. She knows how to appropriate the best moments from other romantic comedies, such as the rooftop scene from The Goodbye Girl, for emotional effect. And Finding Bliss is much better in using porn as a refuge for misfits than, say, Kevin Smith’s Zack and Miri Make a Porno. Unfortunately, Davis’s film (much like Jody’s) doesn’t entirely trust itself. Instead of letting the audience read the conflicted emotions on Sobieski’s face, the film prefers to bombard us with imaginary voices for Jody to react to. It’s almost as if Davis doesn’t entirely trust her character, much less Sobieski. There’s one scene that Sobieski plays, sitting in an awkward position with her knee up. And this comes across as desperate blocking that needlessly delimits the film’s potential. The film is also awkward when Jody’s parents enter the equation and when, during conversations between Jody and Jeff, it brings up the tired philosophy of women being aroused by more than just an emotional connection. It’s on firmer ground when trusting in the quite mythical Grind, and pursuing the film’s artificial disparity between mainstream and adult entertainment which reflects the very real discrepancies between how Americans live and what our national culture allows us to reveal about ourselves. This film didn’t need Ron Jeremy or Stormy Daniels — who both show up near the end. Had it called more bullshit on the self-imposed censorship system that prohibits real human emotion and real art from flourishing, it might very well have lived up to screwball subtext.