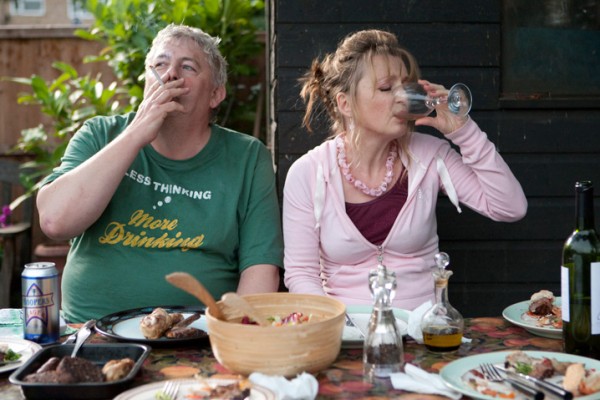 It is a ubiquitous truth that distinctive art often polarizes. But Mike Leigh’s films often cause some of the more catholic critics to reveal their unadventurous sensibilities.

[This is the tenth in a series of dispatches relating to the 2010 New York Film Festival.]

“I’m concerned in making films that talk to people. Like anybody, I only want to talk to anybody who wants to listen, who wants to know, who wants to share, or have a conversation with me, as it were. I can’t deal with the kind of media-obsessed, decadent position that can’t decode the film for what it actually is. Which is to say an open, honest look at real people and how real people are, with their needs and all their vulnerabilities. Warts and all. If you can’t embrace that, then go away basically. You’re quoting people at Cannes. Journalists, no doubt, who say that these are people I wouldn’t want to meet at a cocktail party. Well, you know, you’re not going to meet these people at a cocktail party. Clear off to the cocktail party and don’t worry about this sort of film. Because you’re not interested basically. And if people are not interested, I can’t do anything about it.” — Mike Leigh, in a soon-to-be-aired Bat Segundo interview conducted on October 4, 2010

It is a ubiquitous truth that distinctive art often polarizes. But Mike Leigh’s films often cause some of the more catholic critics to reveal their unadventurous sensibilities. (One of Leigh’s masterpieces, Naked, was, by way of depicting particularly nasty behavior, declared misogynist.) While there’s nothing wrong with responding to a movie like one of Harry Harlow’s monkeys from time to time, a cinema intake composed of nothing more than genetically modified bananas will inevitably cause an otherwise sound mind to bray for his cloth mother.

Yes, I’m a Mike Leigh fan, but not slavishly so. Topsy-Turvy is overlong, but quite admirable in its historical ambition. (And it was absolutely the film Leigh needed to make to get to his next “historical” film, Vera Drake, which is one of his masterpieces.) Secrets & Lies, for all of its brilliance, resolves too tidily. I’ll take Abigail’s Party over Life is Sweet, even though I revere both flicks (and enjoy Alison Steadman in both). But aside from these very minor complaints, Leigh’s characters — whether you like them or not — may be more realized than those of nearly any other living filmmaker.

As Leigh’s films have defiantly chronicled the human in an age more concerned with calculating clinging, certain critics have revealed their not so closeted misanthropy — in other words, an innate disposition towards an unchallenging and predictable type of film.

Yes, Mike Leigh’s latest film, Another Year, features a very sad and troubling character clinquant in dimension played by Lesley Manville. The cookie-cutter protagonists and antagonists you asked for are available at the multiplex, thank you very much.

But I’m convinced that Another Year‘s mixed reception at Cannes (alas, a few rumblings were overheard in the Walter Reade Theater) can be squarely divided between those who are interested in life and those who are not. For Another Year dares to show several sides to kindness, a topic that has been very much at the forefront of Leigh’s films since Vera Drake. Leigh seems to share the sentiment behind Kurt Vonnegut’s famous declaration from God Bless You, Mr. Rosewater: “God damn it, you’ve got to be kind.” But he’s also smart enough to understand that societal forces threaten to crush this human spirit. Thus, housekeeper Vera Drake sees her illegal abortions as an act of kindness (and receives no pay for this) and is almost incapable of perceiving her actions as wrong, even as her family and others attempt to explain why she’s in such trouble. Merciless government permanently transforms her. Happy-Go-Lucky, by contrast, sees a very happy character, Poppy, finding her natural temperament tested — particularly, by a humorless driving instructor — and is, even at film’s end, asked not to be so nice (or kind) to everyone. She defies this. And in Another Year — the first of Leigh’s films to be squeezed into a yearlong sectional narrative (although certainly not the first to concern itself with cyclical behavior) — the human spirit’s effort to flourish is very much determined by vocational expectations. (And, as my moviegoing companion and I agreed, one minute of Another Year contains more understanding of people than the whole of Jonathan Franzen’s Freedom.)

But let’s first consider the naysayers (with much gratitude to David Hudson for rounding them all up). The Hollywood Reporter‘s Ray Bennett complained that most of the film’s characters would be the type “whom you would go out of your way to avoid at a party.” Time‘s Mary Corliss offered similar sentiments: “All the actors make the most of their time before the camera; eventually a plot emerges and a narrative crescendo is reached. It’s real life, processed for the cinema in Leigh’s practiced style. But the real life it simulates is too often that of an evening that turns into an endless night with friends one wishes might just get their coats and get out.” Never mind that Bennett and Corliss fail to see certain advantages to “meeting” such apparently unpleasant people on film. Yes, they rightly compare Leigh’s film to a cocktail party, but they don’t seem to understand that a forty foot screen protects them from social immersion. The audience is not chatting up these characters, but Leigh presents them so vividly (the final look on one character at the end of a long dolly shot, Manville’s masterful head and shoulder bobbing as Mary, a widower’s laconic vernacular and the look in his eyes as he observes the madness around him; to cite just three) that it is nearly impossible not to lose yourself (as my moviegoing companion and I did, sitting still and mesmerized for 129 minutes) and feel that You Are There. And the idea of going to a movie, whether for entertainment and enlightenment, to have your worldview confirmed strikes me as antithetical to existence — diametrically opposed to why any enthusiast soaks up culture. In other words, why did these critics bother to go to Cannes anyway?

And then there’s Todd McCarthy’s schematic assessment via blog: “For me the film is obvious, schematic and lacking in interesting undercurrents or subtext.” Never mind that McCarthy is unwilling to describe what precisely that “obvious” and “schematic” perception is. But thankfully, his tepid criticism can be easily rejoined by what is contained within the movie.

You cannot call Another Year‘s Tom and Gerri “obvious” and “schematic,” because, despite the fact that this couple is somewhat privileged (an apparently stable marriage, reliable middle-class income from geologist Tom and counselor Gerri, a garden allotment, and so forth) and permits maladjusted people into their home with a kind of liberal guilt and empathy that may not be entirely reconciled, they do not offer any defense when friends ridicule Mary (over the fact that she doesn’t know the precise engine type in the used car she has just purchased). Gerri, despite being trained to recognize a narcissist, nevertheless permits Mary to crash into her family home with the same shaky skill she has behind the steering wheel. And when there is the inevitable skirmish during the autumn, Gerri still waits until the winter to state, “You have to take responsibility for your own actions.” Which is something she has been meaning to say all along. There’s also something slightly predatory about the way Tom and Gerri invite friends who are less successful than they are into their house, such as their old portly friend Ken, who appears in the summer, but is a few beers short of a cardiac arrest. Yet Ken, despite being lonely and unhappy, has refused retirement. He is content to “eat, drink, and be merry,” but, from the vantage point of Tom and Gerri, he is “better” than Mary by way of remaining employed in a more lucrative job. (Mary toils as a secretary; interestingly enough, at the same workplace as Gerri. When Gerri invites her for a drink, Mary says that she has only an hour to spare — the exact amount of time that she would devote to a patient) One is left wondering whether Ken would be in worse mental shape, were he to be toiling in a similar position as Mary. (In an ironic bit of casting, no doubt entirely unintentional, Leigh has cast Peter Wight as Ken. Wight played the security guard in Naked, who urged Johnny not to waste his life.)

Aside from this intriguing relationship between happiness and class, there is also Janet (played by Vera Drake lead Imelda Staunton), who appears at film’s beginning (in spring). She is a cautionary character and, if we are to look at Another Year as a cycle, she represents what Mary may very well transform into. Janet is depressed. She cannot sleep. She rates herself 1 on a scale of 1 to 10 on how she feels. And when we are first introduced to her, the camera initially concentrates on little else but Janet’s face. We gradually see more of the doctor who is treating her, and the first detail we notice is that the doctor is pregnant. Thus, Janet (like Mary) is very much consumed by her own internal world. Does society then have a duty to treat people like Janet and Mary? Is it “kinder” to retreat from miserable people (as the above mentioned critics clearly have) or to let them into your home with the hope that your kindness will help them figure life out?

Since this is a Mike Leigh film, there aren’t any easy answers. But the film’s commitment to such concerns is a much needed reminder for any humanist, whether lapsed or well-practiced. Another Year, like the best of Leigh’s films, is very much a Rorschach test. It will be appreciated and understood and felt by anyone who understands that even the unpleasant and the marginalized have souls. I haven’t even begun to scratch the surface of this considerably embedded masterpiece, but it’s definitely one of the year’s best films. And I’ll probably have another go at it just before release date. Anyone who compares Another Year to “an endless night” probably doesn’t have the guts to leave her cloistered comfort zone.