Jeff VanderMeer and Nick Mamatas are schoolyard bullies and enemies to people in recovery. How many other people have they harmed? 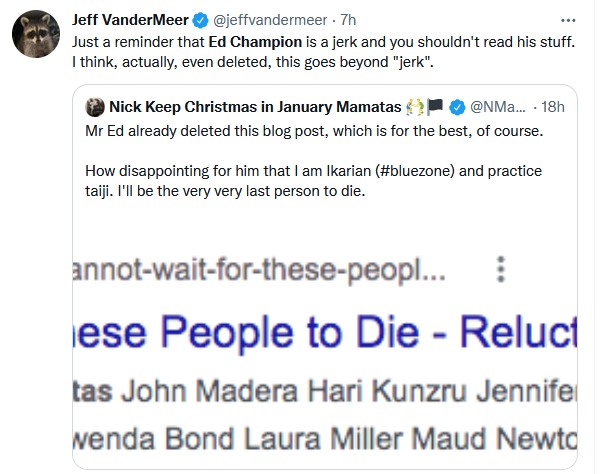 I’ve already been transparent about the fact that I had an alcohol-fueled episode during a 36 hour period on Friday and Saturday, one in which I barely remember much of what I was doing. We’re talking vituperative emails and blackout drunk conversations that I don’t even recall on the phone with friends. Shameful assholic stuff that I would certainly not have done if I were sober. That’s why I attended a meeting today for the first time in my life. And that’s why I deleted my Twitter account. And that’s why I won’t be drinking again for a very long time, if ever. To all the friends who reached out to me and who know the true score and who actually know who I am and who have directed me to resources, thank you.

During the course of that hideous bender, a blog post in draft — seemingly listing the people who I wanted dead (a satirical holding place title that did not reflect the true intent of the list, of which more anon) and written after I had imbibed a large bottle of scotch, a six pack of beer, and a bottle of wine and was hardly in what I or any person would call a rational or clear-thinking place — was accidentally published and swiftly unpublished after I realized what I did. But blue-checkmarked authors like Jeff VanderMeer and Nick Mamatas (the latter, citing blue zone fighting, has also threatened me with a fight to the death and, as you can see from the screenshot, tried to hack my website) — two people who I have literally not thought about in years but that I was thinking about for reasons that shall soon become apparent, two people who I have said nothing about in more than a decade, two authors whose books I do not read and will not read and have no interest in reading or knowing in any way — but who have both gone out of their way to use their influence on Twitter, invoking my name to spread false rumors about me while also dredging up my drunkenly assembled list without context, which came from a very dark place that I hope you never have to experience. They are now so obsessed with me that they are literally scouring cached images of my website to impugn me and badmouth me. Trying to egg the addict back onto Twitter. These are clearly two harmful browbeaters who I will now not be including on the far more important list I was assembling and that I’m not supposed to talk about — one that involves submitting myself with humility and contrition to the people who I have wronged.

Mamatas and VanderMeer thrive on hating and injuring and hurting perceived enemies. (Here are a few examples. On October 7, 2020, VanderMeer claimed, sans evidence, that Dan Bloom “sent me strange and harassing emails, emailed venues I was speaking at insinuating that they could cut me loose.” Meanwhile, Weird Webzine, after not expressing enough fealty to Mamatas for a minimal contribution, was harassed by Mamatas on December 12, 2018.) People talked to me about the weirdly obsessive conduct of both men when I used to practice as a literary journalist. And it’s clear that it would delight them if I cracked. But I won’t. They want me to drink. They want me to be a raging asshole. They want me, in short, to suffer and be the worst human being possible. But they were on this list. Because I was thinking about the people for whom I had bad feelings about and trying to fix myself. I am truly baffled as to why I live rent-free in their heads. Because I have literally said or thought nothing at all about them for a good ten years. Not even in emails. But they seem peculiarly obsessed with me. They want you to know that I am an irredeemable human being. The timing here — and this was initiated by Mamatas — isn’t an accident. I’ve been public in other online places about the fact that I’m unemployed and in the running for jobs right now. And aside from disrupting my efforts at recovery, these two people want to take potential bread out of my mouth by making sure the social media deck is stacked against me. Which is something I wouldn’t even do to my worst enemy.

I know there is no appealing to either Mamatas or VanderMeer. Both have, in my personal dealings with them (the last I contacted them in any way was more than a good ten years ago, for Pete’s sake), possessed neither a stain of empathy nor an ability to commiserate and I’m hardly the only person who they’ve hunted down and invented stories and motivations about. I hope one day that the many victims of VanderMeer and Mamatas eventually come forward. My list should never have been published and was not intended to be published. It was the rough draft for another list. And it had a bold title. Because I have a sick sense of humor. But I just figured I would provide the appropriate context as I remain committed to carrying on with two very important things: (a) not returning to Twitter and (b) not drinking.

I am not afraid of telling the truth about myself. Even the unpleasant parts. And I’m certainly not afraid of either Mamtas or VanderMeer, who are both little more than schoolyard bullies in the form of sad and resentful middle-aged men and who will undoubtedly twist this essay (and the list with the acerbic title) to serve their own wildly narcissistic and abusive ends.