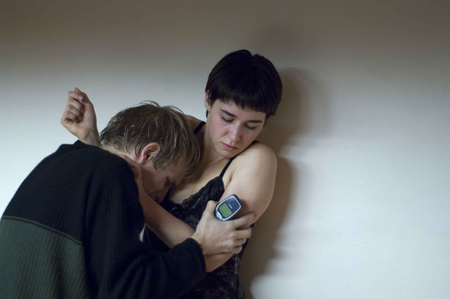 What follows are the notes I took during Lorna’s Silence, which opens in limited release this Friday:

Shuffling of notes under window. Pan up to woman. Counting. 340. Appointment. A loan. Will be Belgian soon. Against yellow wall at beginning. Green. Red counter. Blue. Talking. Telecom. Hair. Roommate. One euro ten. Close the curtains. Moving the bed. Told him no. (No cards.) Turn the music down. Music. Not so bad. Hide her. Hold on. Lorna — calls in the night.

Have to be up at six. Not going. Quit. Look in. Must resist. An addict. Cloudy. A mess. He’s quitting.

A cop. Give him. Will police pursue it? Just when you leave Belgium.

Returning stuff when done. Bug. Blinds in hospital. Divorce. No. We picked a date to avoid divorce. Sokol — the Russian. If he DJs now, it’ll be weird. Couple behind dating. Need to be a widow. Sokol — kissing him. Race to set. Will she fuck him? Almost 20,000 in the account. Wait for the Russian. Banker with addresses. Walking around. Tea held with both hands. Turning a light off.

Parking lot. Cars. You don’t go to the cops. First deal with the Russians. Lorna I know. Guy at the station. Sokol beard shaved. Cleaners. Getting the divorce. Making dinner. Celebrate getting out. Her getting out. Fabio — waiting. Russian won’t wait. Two weeks after divorce.

Running after him. In love? I’d handle the dirty clothes. Funeral costs. WTF? See him one last time. Real? Yellow walls. Sure you won’t stay? Running away. CO player. Thank me instead. Extra cont.

Heroin dealer. Duped him from buying it. Was that action part of the deal? Money nothing. Cleaning woman. See her at moments. At work. Drinking. Selling money.