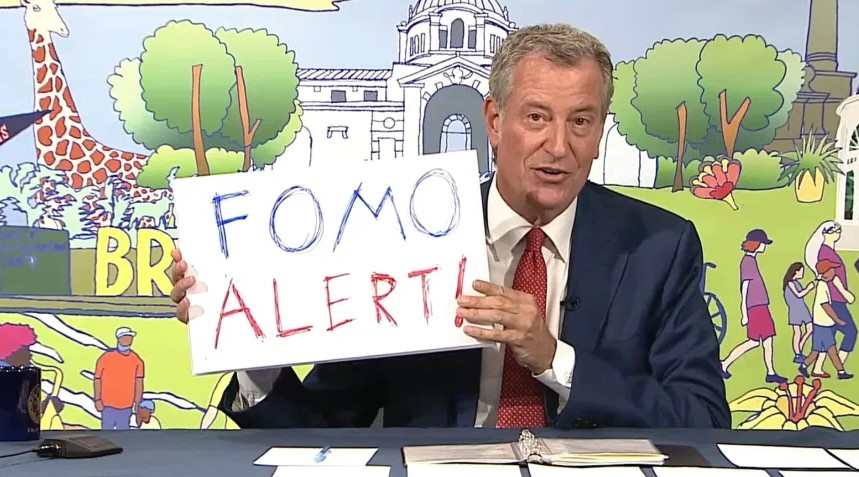 In which an obstinate Mayor attempts to defy the very forces of nature and further cements his dubious legacy.

On Saturday night, Mayor Bill de Blasio looked upward into the heavens, denying the existence of heavy rain, thunder, lightning, and all the other meterological accoutrements that tend to arrive with a Category 1 hurricane, and declared that his Central Park concert — his great plan to “reopen” New York City — would go on. He carried on with the intransigent gusto of a Flat Earther and the obstinacy of a hopeless fool.

The crowd, as chronicled by City & State reporter Jeff Coltin, was confused. A pink LED screen telegraphed clear safety language urging the crowd to move quickly and calmly to the exits. Then, after the majority of the crowd departed the area, the Mayor himself leaped on stage a mere eight minutes after the safety announcements and declared, in his booming voice, “We want to bring the concert back. Listen to me. We want to bring it back. We need everyone for a brief period of time move to someplace safe because of thunder and lightning. And then we’re going to bring the concert back. For your safety…Move to somewhere indoors briefly nearby. We’re going to get you an update shortly. We hope to bring it back shortly and finish the whole show. Okay? Get someplace safe right now.”

There was, of course, no area that was “somewhere indoors” anywhere close to the Great Lawn, the location of de Blasio’s “We Love NYC: The Homecoming Concert.” There were, however, plenty of trees. Magnets for lightning.

As Coltin observed, some people had waited in line for two and a half hours to get into the show. Most did not wear masks. Setting aside the reckless gamble that de Blasio had made with the delta variant by instituting a lax entry policy (attendees were only required to have one dose of the two shot vaccine), it was rather astonishing that he had decided to take on an equally irresponsible risk with Hurricane Henri.

Then after de Blasio’s volte-face, an official voice emerged over the speakers announcing that the event was canceled.

There was never a contingency plan for this concert — despite significant advance notice about the hurricane.

Since I’m encouraging New Yorkers to go on with your lives + get out on the town despite Coronavirus, I thought I would offer some suggestions. Here’s the first: thru Thurs 3/5 go see “The Traitor” @FilmLinc. If “The Wire” was a true story + set in Italy, it would be this film.

Bill de Blasio has been a largely ridiculous Mayor throughout the last eight years. His clown car escapades have included a risible run as President, an unpardonable pizza solecism, in which he ate a slice with a knife and fork, and his remarkably idiotic call for New Yorkers to “go on with your lives + get out on the town despite Coronavirus” in March 2020.

If there’s one thing that unites New Yorkers, left and right, it is their universal hatred of Bill de Blasio. (To add insult to incompetence, de Blasio was also loudly booed tonight at the concert. The only other jeer came when Staten Island was mentioned. I put forth the reasonable proposition that when you are belittled with the same enmity meted out to New York’s least respected borough, you have probably failed at your job.)

De Blasio was undoubtedly riding high after his longtime enemy, Governor Andrew Cuomo, went down in flames and was forced to resign in the wake of numerous allegations of sexual harassment. But de Blasio somehow did what no other New York Mayor, not even David Dinkins, has done: he played himself.