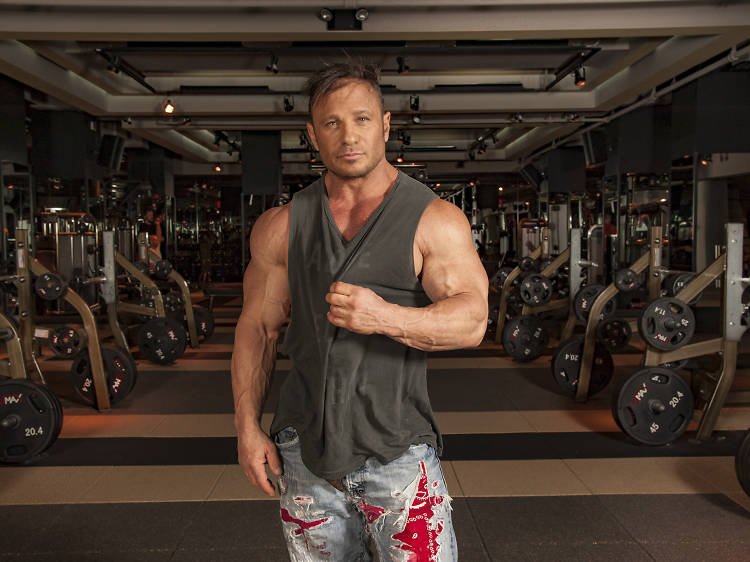 In the fifth NaNoWriMo installment, we are introduced to the notorious Rob Rollins, who has secret plans of his own!

(Previously: All the Ugly Horses)

Like many who had the misfortune of working the Pallof press under Rob Rollins’s despotic watch, Debbie Ballard resembled a marionette getting scuffed up during a Punch and Judy show.

Debbie pushed and pulled the resistance band with all her might, stretching her glutes and testing her torso and feeling the fatigue that would require an double Americano to elude an afternoon nap.

She had always given Rollins two more when he asked for one. If you gave him just one flex of the pecs, he would grunt and then surprise you hours later with predawn text shaming. Rollins was a man who didn’t seem to sleep. Or, at least, nobody could pin down the exact hours he slept. But that was his brand. Professional tyrant. Heartless dictator. Merciless Messiah for better bodies. You always felt as if Rollins was standing behind your neck, even when he was standing right in front of you. Rollins somehow exuded the presence of six men slowly pacing around you as you sweated during a set. And the Myrtle Beach gym rats, at a far higher proportion than fitness nuts in other cities, tended to need an extra smidgen of fear to sustain their discipline. Rollins, as he liked to remind his many clients, was their salvation, their ticket to a healthy heaven. And the mandatory bimonthly seminars at the Carolina Opry (all two thousand seats filled by present and former clients, an additional $400 charge) would bring anyone who doubted his credentials on stage and order the hecklers to strip off their clothes and reveal the fatty deficiencies of their bodies. Or he would single out a client who didn’t live up to his exacting standards and humiliate the poor grunt by taking four Franklins out of his wallet (“Here’s your refund. I can’t teach you anything. So get the fuck out of here!”) and, after the vicious verbal beatdown, stretch his arms like Christ on a cross while the audience showered the failure with caterwauls and applause.

There was at least one support group for those who had flunked out of Rollins’s program, where quavering innocents described their PTSD. Three people had tried to sue Rollins for intentional inflection of emotional distress. And that’s when Rollins pulled out the redwell in his gym bag and reminded that you had signed an NDA. You had to commit to a yearly contract if you wanted to work with Rollins, but Rollins reserved the right to dismiss you. He didn’t accept no shows. He’d find you if you skipped an appointment or moved out of Myrtle Beach. And everyone tolerated this tyranny because nobody could quibble with the physical results.

Debbie’s body buckled from the tension.

“Oh, you’re only going to give me one more?”

Ninety-six minutes of this. Would she survive the last fifteen minutes of her session? Rollins prescribed exercise regimens punctuated by his trademark berating. He was fond of screaming words like “loser” and “disappointment.” And he earned two hundred dollars an hour for doing this. As he liked to remind his clients, it was Rollins who chose you, not the other way around.

When Sophie had slipped Rollins’ contact info to Debbie, she had been dubious. “Really?” she said to her best friend. “This guy?”

“Well, you can’t argue with this,” said Sophie, who slipped off her robe to reveal her sculpted curves protruding from a ravishing leopard skin bikini.

And Debbie couldn’t. She felt a surprising desire to fuck her friend, but she didn’t. She knew Sophie had something going on with a few of the locals, as did everybody else in Myrtle Beach. It was a city small enough for people to talk. But you kept your judgments to yourself. Everyone has their own reasons for living the way they do.

Debbie collapsed on the mat.

“Ballard, what are you doing?”

“Don’t be sorry. Get back on the Pallof!”

“Do you want your core to turn to flab?”

“Do you want to be like all the other sad assholes who stuff McDonald’s into their faces and hate themselves?”

He clapped his hands and flourished his arms much like a conductor hitting the trickiest part of Mahler.

And although she was sore, Rollins had been right. She did have a little still left in the tank. But she didn’t know how much. Finally, as she was about to collapse, Rollins said, “Session’s over. Nice work, Ballard. You’ve come a long way in six weeks.”

She grabbed a towel to wipe off the sweat that had poured down her neck. Rollins, for all of his running around, hadn’t revealed so much as a bead.

Debbie? Rollins had never referred to her by her first name before.

“Is it all right if I call you Debbie?”

“Do you know anything about politics?”

“Why are you asking?”

“You may have noticed the billboards and the TV ads.”

Who hadn’t? There had even been an article in the Myrtleist by that Ali Breslin woman about it. WHAT IS ROLLINS’S NEXT MOVE?

Rollins flashed Debbie a bright smile. Immaculate teeth. Whiter than the output from a soap factory.

“Can I let you in on a little secret?”

“I couldn’t talk even if I wanted to. I did read the NDA before signing it.”

“You were the only one who asked for revisions.”

“And I appreciate you making them.”

“I rarely make concessions for anyone. But you, Debbie?” He put his hand on her shoulder and she couldn’t deny that it felt good. “You’re different. You seemed like someone I could make an exception for.”

“Because I need you.”

“I’ll be holding a press conference this afternoon and I want you to be there.”

“To Dixon, Joyce and Markson? What do they have you doing over there?”

“What do they have you do?”

“Well, what if I were to retain you?”

“You’d have to speak with Mr. Dixon. He’s the partner who supervises me.”

“No. I want to retain you independently.”

“I have a noncompete.”

“Oh, I think Mr. Dixon will budge. He’s an old friend. And I’m a frog who can leap across any interstate.”

“Impossible?” screamed Rollins. He had shifted so fast from gentle confidante to aggressive megalomaniac. “What is the second rule of The Rollins Way?”

“‘Impossibility is an illusion perpetuated by the weak.'”

He was so proud to have his words quoted back to him. Never mind that this tenet had been devised by a ghost writer. But he had paid for it. So the words were now his!

“Every man has his weak spot.” He stepped closer. “Every woman too.”

“Mr. Rollins, is this your way of asking me on a date?”

“I never date my clients. No, Debbie. It’s your services I want.”

“Well, I’m flattered, but I really need to hit the shower and get back to work.”

Thirty thousand dollars. It wasn’t fuck you money, but it was still quite a lot. She thought of her crushing student loan debt, the mortgage payments, the money she needed to keep her mother alive in the cancer ward.

“What kind of work do you want me to do?”

“I want you to manage a campaign.”

“A campaign for what?”

“For the House of Representatives.”

“I’ve thought about it for a while. It’s about time. And that’s s why I’m calling the press conference.”

“And what political experience do you have?”

“And, uh, what party are you running with?”

Republicans. God, she hated them. Reptilian, devoid of empathy, stripping away her rights as a woman.

“Oh, I’m not a Trumper. If that’s what you’re worried about.”

“Well, you’re going to have to align yourself with the MAGA crowd and the Christians if you want to do this. If you’re really serious.”

“You see, that’s exactly why I need you to run my campaign.”

“Where do you stand on Israel?”

“Rob, you can’t support Israel and Palestine at the same time.”

Was he fucking serious? Did he not pay even the most cursory attention to foreign affairs in the last three decades?

“You like it when we parrot back your words to you, don’t you?”

“Of course I do! It means you’re learning something!”

“Well, I’ll reiterate what you say to the flunkees. Rob, I can’t teach you anything.”

She walked away, trying to get as much of the sweat off her neck as she could. Rollins followed her.

“Okay, what if I made it sixty thousand?”

She stopped in her tracks. Sixty thousand. Well, that would kill the debt interest alone. And since the Fed couldn’t refrain from raising interest rates, she was very keen on pecking away at the principal.

She turned to Rollins.

“Sixty thousand for one month’s work?”

“A preliminary phase. And we could keep this in place on an ongoing basis.”

Nine months away from the next election. If she stuck around, that would be $540,000. A lot more than the $140K she made each year at Dixon, Joyce and Markson.

“Yeah. I’ve got a guy who helps me with my investments. And there have been quiet fundraisers.”

“You realize I’m a Democrat.”

Blood money for a temporary stint. But she supposed she could arrange for a leave of absence. Dixon knew about her mother. And while he was a tough man, he was also fair. And she knew that he didn’t want to lose one of his top associates.

She held out her hand to Rollins.

“Okay, Mr. Rollins. You’ve got yourself a handshake deal.”