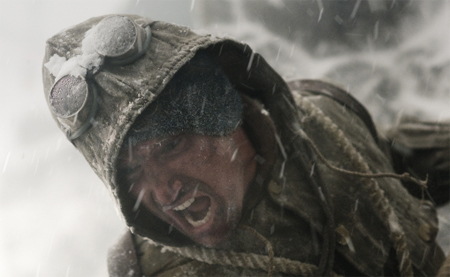 It’s safe to say that Nordwand (known as North Face in the States and presently hitting the film festival circuit, to be followed by a rolled out release) is a better movie than Clint Eastwood’s The Eiger Sanction. Yes, the 1975 film has a few decent mountain climbing scenes. But it also has such preposterous moments as George Kennedy convincing Eastwood to carry beer in his backpack as they climb a mountain, so that he might guzzle the cans at the top. Eastwood’s climb up the treacherous north face of the Eiger mountain is, oddly enough, not too dissimilar from the one chronicled in Nordwand, although Nordwand is based on real-life efforts. And you could look up the names. But then you’d know the ending. And that wouldn’t be very fun.

Harsh snow, wintry weather, avalanches, attempted rescue by railroad station. The perfect ingredients for mountain cinema and a regrettable reminder that you can step inside the theater in the winter, but you won’t shake yourself of the snow. So much for escapism. But Nordwand proves to be considerably more engaging than The Eiger Sanction, K2 (which featured a whiny Michael Biehn), and Vertical Limit (which featured a whiny Chris O’Donnell)– in large part because there is a race between Austrians and Germans at the heart of the storyline, thereby making this climb — at least on the German front — one of national pride (and considerable stupidity). But since the two main mountaineers we root for don’t whine, as their American counterparts do, we are all too happy to cheer them on.

The events, of course, are set during Nazi Germany. It is May 1936 — the year of Leni Rifenstahl’s Olympia and the beginning of Nazification. Rifenstahl, as we know, got her start with mountain films. And we certainly know that it’s 1936, because one German offers this mood-killing explanation for why the Germans wish to climb the North Face before a festive crowd: “The pride of facing a challenge, whether it be sports or politics.” Jews have been stripped of their civil rights, but you wouldn’t know it watching this film. The newspapermen sent to cover the spectacle are more interested in “the spirit of the German conqueror in battle with the mountain. That’s what makes a story.”

Nordwand does make a good story, in part because many of the mountaineers die and we even get to enjoy fingers freezing up and people shrieking in agony. I don’t know how much of the mountain climbing in this film is real and how much of it is fake. Frankly, I am presently too lazy to check. But it seemed convincing enough for me. One admires the spirit of the sensible and experienced Austrians, the film’s protagonists. They offer some pretty nifty side swinging moves that I can’t imagine any whiny American trying on a indoor rock wall. The Germans are determined to commit folly in the name of the Fuhrer. While this is certainly their right (as characters, that is), I was slightly disappointed that there wasn’t more nationalism drenching through clinched teeth. But my desires were somewhat placated by a rather splendid mountain cake wheeled into a banquet room.

Overall, I enjoyed Nordwand and can recommend it to those who like German mountain films, which are less whiny and more interesting than the ones that come from America.