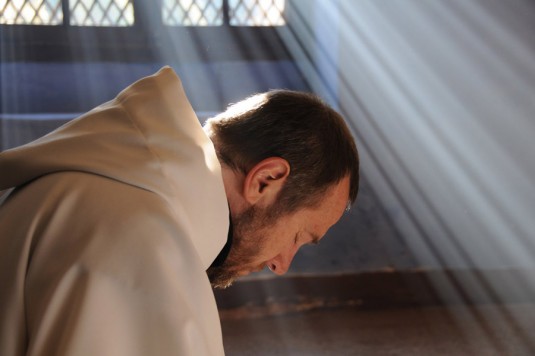 Xavier Beuavois’s Of Gods and Men is a film so boring that it threatened to put me to sleep at least three times during its interminable 122 minutes. I have nothing in particular against the monastic life or unexpected political collisions or trying to understand why people remain inflexible when given clear mortal consequences in resisting common sense or the Trappists or the Algerians or films that are slow and long and, yes, even boring. Indeed, the film’s premise — based on the real-life assassination of seven monks who refused to leave Tibhirine in 1996 when terrorists entered their inner sanctum — is a fascinating one.

But this film ain’t Tarkovsky or Antonioni. The problem here — and I do realize this snoozefest has won the Grand Prix, along with unchecked fellatio from the film snob brigade; knock yourselves out — may be that Beuavois has so insisted on uncompromising authenticity (even going to the trouble of basing one shot around a shaky home video), of lining up every damn narrative moment to some scrap of a fact, that there’s little wiggle room to explore any discrepancies. These people lived, for fuck’s sake. And they were braver and more committed than most of us. I’m not necessarily against such orthodox recreation of reality, but it’s often most interesting when given a new context or a new framework that permits us to feel something. When Christian Marclay asks us to rethink images of clocks, as Art Fag City’s Will Brand recently suggested, he’s asking us, in breaking his own rules, to wonder if the viewing experience is too easy. What the hell is Beuavois asking us to do? By producing such a tepid timewaster, he encouraged me to walk out at several points and read a book on the subject. Alas, it was only my own stubborn self-discipline to sit through every damn minute that compelled me to stay. I am now writing a bitter review that vitiates the noble obduracy of the Trappist monks. And I feel terrible about it. But I cannot give this film a fair pass. It feels so trite in comparison to Wisconsin or Algeria or Libya or any other clusterfuck I could get sucked down when chasing the headlines.

The problem may be that I’m a reader and many of the film people who accept this malarkey as art are often not seen holding a book. I mean, even Ann Patchett’s melodramatic novel, Bel Canto, has more going on than Of Gods and Men. Beuavois seems to have avoided any deep or insightful investigation of the kind of temperament it takes to carry on with your low-key existence as terrorists abscond with your provisions and beat up on the people you’re trying so desperately to help. That kind of moral predicament should contain some element of horror. Is that too much of a concession to conventional narrative exigencies? Perhaps. While there is certainly some resistance to the decision to stay, and there is definitely a united front on the question, if the narrative intent here is to mimic what it feels like to be bullied, then I submit to the filmmakers that, no matter how tough or committed you are to a life of avoidance, you will still feel some modest trauma or shock. It’s certainly interesting that the monks here choose ritual as a panacea.

The film does looks beautiful. Shafts of light cascade against crumbling walls in need of new paint. There’s a quiet dignity in the way these monks share a meager meal — with one remarkably indigent celebration just before the monks concede to the inevitable, Swan Lake playing in the background and tearful eyes, that achieves a cinematic poignancy I’d be hard-pressed to dismiss. And I very much liked the way Beuavois shot many of these monks with the backs of their heads to the camera, a subtle visual suggestion conveying to the audience that we may very well be invading their holy lives.

But to get to these moments, one has to sit through a squirm-inducing concatenation of slow stretches. Endless and not especially sophisticated dialogue about how a love for God replaces a love for women. And so forth.

With so much attention to ornate aesthetics, I kept wondering why I felt damn near nothing for these monks. They receive letters and visits from the concerned. But they answer that they didn’t come to Algeria for personal interest and that there remains some circumstances in which men will not carry out evil. Stubbornness is an intriguing quality to contemplate, but up to a point. These dead monks demand more than technical recreation in order for us to feel.