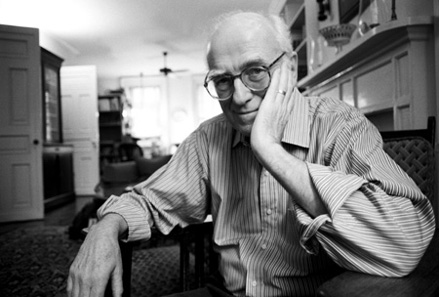 Sam Tanenhaus: “Once again Franzen has fashioned a capacious but intricately ordered narrative that in its majestic sweep seems to gather up every fresh datum of our shared millennial life. Franzen knows that college freshmen are today called ‘first years,’ like tender shoots in an overplanted garden; that a high-minded mom, however ruthless in her judgments of her neighbors’ ethical lapses, will condemn them with no epithet harsher than ‘weird’; that reckless drivers who barrel across lanes are ‘almost always youngish men for whom the use of blinkers was apparently an affront to their masculinity.'”

Here’s a passage from Richard Stark’s The Outfit:

All the money came to the Novelty Amusement Corporation. It started as small change, here and there throughout the city, and it all funneled into one central office, all the money bet every day on the numbers.

Take one dime. A lady goes into a magazine store and tells the man at the counter she wants to put ten cents on 734. If 734 hits she wins sixty dollars. The odds are 999 to one, but the pay-off is 600 to one. The magazine store owner writes 734 and 10¢ under it on two slips of paper. He gives the women one slip; he puts the other in a cigar box under the counter. He puts the dime into the cash register, but he rings No Sale. At three o’clock, his wife takes over at the counter while he takes the cigar box in back and adds up the amounts on all the slips. The amount is $18.60. He puts all the slips in an envelope and goes out to the cash register and from it he takes a ten dollar bill, a five, three ones, two quarters, and the dime. He puts this cash in the envelope with the slips. He places the envelope inside a science fiction magazine — on Wednesdays, it’s a science fiction magazine — and puts the magazine under the counter.

At three-thirty, the collector comes. The collector is a plump young man with a smiling face, a struggling writer making a few dollars while waiting to be discovered by Darryl Zanuck or Bennett Cerf. He drives up in a seven-year-old Plymouth that belongs to the local numbers organization and which he is allowed to drive only while making collections. He parks in front of the magazine store, goes inside, and asks for a copy of a particular science fiction magazine. The owner gives him the magazine and tells him that will be $1.86, but that’s what the young man hands over with no protest.

The young man then carries the magazine out to the car. He sits behind the wheel, takes the envelope from the magazine, puts it in a briefcase which is on the seat beside him. He tosses the magazine onto the back seat with seven other discarded magazines and taking a small notebook from his breast pocket, he writes in it after several other entries: “MPL 1.86.” Then he puts the notebook and pencil away and drives on to his next stop.

All in all, he buys fifteen magazines, then drives on to the Kenilworth Building and leaves the car in the lot next door. He carries the briefcase up to the seventh floor and enters the offices of the Novelty Amusement Corporation. He smiles at the receptionist, who never gives him a tumble, and goes into the second door on the right, where a sallow man with a cigarette dangling from his lips nods bleakly. The young man puts briefcase and notebook on the desk, and sits down to wait.

The sallow man has an adding machine on his desk. He opens the notebook and adds the figures for the day, coming up with $32.31, which should be ten percent of the day’s take. He then adds up the prices on the policy slips, and gets $323.10, which checks out. He finally adds together the actual money from all the envelopes, once again arrives at $323.10, and is satisfied. Out of this money, he gives the young man $32.31, which is what the young man paid for the magazines. In addition, he gives him $16.15, which is one-half percent of the day’s take from his area — his cut for making the collections. He averages $15 a day, for an hour’s work a day. Well pleased, the young man goes home to his cold typewriter.

The sallow man now takes out a ledger and enters it in the amount of, and the number of, each bet according to the exact location where each bet was made. He adds his figures again to check his work and gets the correct total. By then, another collector has come in. The sallow man is one of six men at Novelty Amusement who each take in the receipts from five collectors. They work at this approximately from four until six o’clock. Each of them clears about $1,500 a day — resulting in a grand total of about $9,000 a day for the entire operation.

Ten-and-a-half percent of this money has already been paid out. The receivers each get one percent. Additional office salaries, rent, utilities, and so on eat up about 3 1/2 percent more. When the sallow man stuffs the day’s proceeds into a canvas sack and carries it back to the room marked “Bookkeeping,” there’s about 85 percent of it left. On an average day, this leaves about $7,700. Ten percent more is deducted almost immediately and put into envelopes which are delivered to law officers and other local authorities. Twenty-five percent is retained by the local organization and split among its chief personnel; the remaining 50 percent is shipped weekly to Chicago — the national organization’s piece of the pie. In an average six-day week, this half of the pie comes to better than $25,000. Each day’s cut is put in the safe in the bookkeeping room, and, on Saturday nights, two armed men carry the cash in a briefcase to Chicago by plane. For security, one of the armed men is from the local organization and one is from the national organization.

On this Saturday, there was $27,549 earmarked for Chicago, in the safe. In the addition there was the $20,000 kept as a cash reserve — on the unlikely chance that, someday, there might be a run on a winning number, or for additional greasing when and if necessary, or for whatever unforeseeable emergency might arise. And further, there was $13,774,50, in the safe, which represents the week’s 25 percent cut for the local organization to be split on Monday. The total in the safe was $61,323.50. Including the dime.

The most difficult problem he’d had to solve for the Trust had been what to do with the two hundred or so families, most of them very poor, who owned houses or trailers on small or smallish parcels of land within the Warbler Park’s proposed boundaries. Some of the men still worked in the coal industry, either underground or as drivers, but most were out of a job and passed their time with guns and internal-combustion engines, supplementing their families’ diets with game shot deeper in the hills and carried out on ATVs. Walter had moved quickly to buy out as many families as possible before the Trust attracted publicity; he’d paid as little as $250 an acre for certain hillside tracts. But when his attempts to woo the local environmentalist community backfired, and a scarily motivated activist named Jocelyn Zorn began to campaign against the Trust, there was still more than a hundred families holding out, most of them in the valley of Nine Mile Creek, which led up to Forster Hollow.

Expecting the problem of Forster Hollow, Vin Haven had found the perfect sixty-five thousand acres for the core reserve. The surface rights of ninety-eight percent of it were in the hands of just three corporations, two of them faceless and economically rational holding companies, the third wholly owned by a family named Forster which had fled the state more than a century ago and was comfortably dissipating itself in coastal affluence. All three companies were managing he land for certified forestry and had no reason not to sell it to the Trust at a fair market rate. There was also, near the center of Haven’s Hundred, an enormous, vaguely hourglass-shaped collection of very rich coal seams. Until now, nobody had mined these fourteen thousand acres, because Wyoming County was so remote and so hilly, even for West Virginia. One bad, narrow road, useless for coal trucks, wound up into the hills along Nine Mile Creek; at the top of the valley, situated near the hourglass’s pinch point, was Forster Hollow and the clan and friends of Coyle Mathis.

Over the years, Nardone and Blasco had each tried and failed to deal with Mathis, earning his abiding animosity for their trouble. Indeed, a major piece of bait that Vin Haven had offered the coal companies, during the initial negotiations, was a promise to rid them of the problem of Coyle. “It’s part of the magic synergy we got going here,” Haven had told Walter. “We’re a fresh player that Mathis’s got no reason to hold a grudge against. Nardone in particular I bargained way down on the reclamation front by promising to take Mathis off its hands. A little bit of goodwill I found lying by the side of the road, simply by virtue of me not being Nardone, turns out to be worth a couple million.”

Based on the above two passages, which writer do you think really “knows” the world better?