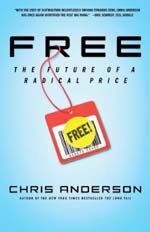 The Virginia Quarterly Review‘s Waldo Jaquith has uncovered several instances of apparent plagiarism within Chris Anderson’s forthcoming book, Free. Unfortunately, I have learned that the VQR‘s investigations only begin to scratch the surface. A cursory plunge into the book’s contents reveals that Anderson has not only cribbed material from Wikipedia and websites (sometimes without accreditation), but that he has a troubling habit of mentioning a book or an author and using this as an excuse to reproduce the content with very few changes — in some cases, nearly verbatim.

As the examples below will demonstrate, Anderson’s failure to paraphrase properly is plagiarism, according to the Indiana University Bloomington Writing Tutorial Services’s very helpful website. It is simply not enough for Anderson to cite the source. An honest and ethical author cannot, in good conscience, swipe whole sentences and paragraphs, change a few words, and call it his. Plagiarism is not an either-or proposition, although we leave the readers to decide whether the cat inside the box is dead or alive.

It appears that Chris Anderson, who boasts in the acknowledgments about spending a year and a half writing this book, has spent most of these eighteen months repurposing content from other sources. Anderson has explained to the VQR that he had “an inability to find a good citation format for web sources.” But this “explanation” hardly accounts for the wholesale theft of language documented here and at the VQR.

And I must point out that, like Mr. Jaquith, I have hardly committed an exhaustive search.

The section on the beginning of Jell-O on Pages 7-10 has lifted almost all of its information from the Jell-O Museum Website, only slightly rephrasing sentences. Here is one example:

Jell-O Museum Site: “A three-inch ad costing $336 in the Ladies Home Journal launched the printed portion of the campaign….”

Anderson, P. 32: “In China, some doctors are paid monthly when their patients are healthy. If you are sick, it’s their fault, so you don’t have to pay that month. It’s their goal to get you healthy and keep you healthy so they can get paid.”

Sivers: “In China, some doctors are paid monthly when you are healthy. If you are sick, it’s their fault, so you don’t have to pay that month. It’s their goal to get you healthy and keep you healthy so they can get paid. ”

Anderson, P. 31: “In one instance, he told his class at MIT’s Sloan School of Business that he would be doing a reading of poetry (Walt Whitman’s Leaves of Grass) but didn’t know what it should cost. He handed out a questionnaire to all the students, half of who were asked if they’d be willing to pay $10 to hear him read, and the other half of whom were asked if they’d be willing to hear him read if he paid them $10. Then he gave them all the same question: What should the price be to hear him read short, medium, and long versions of the poem?

“Those who got the question about paying him were willing to pay. They offered to pay, on average, $1, $2, $3 for short, medium, long readings.”

When opening Chapter 3 (“The History of Free”), Anderson uses very close phrasing from Charles Seife’s Zero: The Biography of a Dangerous Idea (which Anderson credits). Anderson’s sentences skirt the line between acceptable paraphrasing and plagiarism, but this is certainly a bit too close for comfort.

Anderson, p. 35: “Greek math was epitomized by Pythagoras and his Pythagorean cult, which made such profound discoveries as the musical scale and the golden ratio (but not, ironically, the Pythagorean Theorem — the formula for calculating the hypotenuse of a right triangle had actually been known for many years before Pythagoras).”

Seife, p. 28-29: “In modern schools, children learn of Pythagoras for his famed theorem: the square of the hypotenuse of a right triangle is equal to the sum of the squares of the other two sides. However, this was in fact ancient news. It was known more than 1,000 years before Pythagoras’s time.”

Chris Anderson’s habit of citing a book, without acceptable paraphrase, is also evident in a section on the transistor cadged from Chapter 4 of Kevin Kelly’s New Rules for the New Economy (cited but not acceptably modified).

Anderson, P. 79: “For instance, in the early 1960s, Fairchild Semiconductor was selling an early transistor, called the 1211, to the military. Each transistor cost $100 to make. Fairchild wanted to sell the transistor to RCA for use in their new UHF television tuner. At the time RCA was using traditional vacuum tubes, which cost only $1.05 each.

“Fairchild’s founders, the legendary Robert Noyce and Jerry Sanders, knew that as their production volume increased, the cost of the transistor would quickly go down. But to make their first commercial sale they needed to get the price down immediately, before they had any volume at all. So they rounded down. Way down They cut the price of the 1211 to $1.05, right from the start, before they even knew how to make it so cheaply. “We were going to make the chips in a factory we hadn’t built, using a process we hadn’t yet developed, but the bottom line was: We were out there the next week quoting $1.05,” Sanders later recalled. “We were selling into the future.”

“It worked. By getting way ahead of the price decline curve, they made their goal of $1.05 and took 90 percent of the UHF tuner market share. Two years later they were able to cut the price of the 1211 to 50 cents, and still make a profit.”

Kelly: “In the early 1960s Robert Noyce and his partner Jerry Sanders—founders of Fairchild Semiconductor—were selling an early transistor, called the 1211, to the military. Each transistor cost Noyce $100 to make. Fairchild wanted to sell the transistor to RCA for use in their UHF tuner. At the time RCA was using fancy vacuum tubes, which cost only $1.05 each. Noyce and Sanders put their faith in the inverted pricing of the learning curve. They knew that as the volume of production increased, the cost of the transistor would go down, even a hundredfold. But to make their first commercial sale they need to get the price down immediately, with zero volume. So they boldly anticipated the cheap by cutting the price of the 1211 to $1.05, right from the start, before they knew how to do it. “We were going to make the chips in a factory we hadn’t built, using a process we hadn’t yet developed, but the bottom line: We were out there the next week quoting $1.05,” Sanders later recalled. “We were selling into the future.” And they succeeded. By anticipating the cheap, they made their goal of $1.05, took 90% of the UHF market share, and then within two years cut the price of the 1211 to 50 cents, and still made a profit.”

Anderson, p. 171: “The members of the French Liberal School, who dominated the economics profession in France at the time, were uninterested, leaving Cournot dispirited and bitter.”

Wikipedia: “The denizens of the French Liberal School, who dominated the economics profession in France at the time, took no notice of it, leaving Cournot crushed and bitter.”

Anderson, p. 172: “Bertrand argued that Cournot had reached the wrong conclusion on practically everything. Indeed, Bertrand thought that Cournot’s use of production volume as the key unit of competition was so arbitrary that he, half-jokingly, reworked Cournot’s model with prices, not output, as the key variable.”

Wikipedia: “Bertrand argued that Cournot had reached the wrong conclusion on practically everything, and reworked Cournot’s duopoly model with prices, rather than quantities, as the strategic variables — and obtained the competitive solution immediately.”

UPDATE: In the course of my investigations, I accidentally stumbled upon what was apparently Chris Anderson’s hard drive. The only thing I did was peek at the files related to the book. I certainly didn’t scour through emails or add files, as Anderson suggests. (Indeed, I didn’t even know that this represented a public hard drive.) But Anderson, instead of addressing any of my findings here or at the VQR, has instead accused me of adding files to his hard drive, a charge that is patently false. Because I neither possessed the knowledge nor the desire to mess with Anderson’s hard drive. Anderson has since made his hard drive private, demonstrating just how committed he is to open source.

UPDATE 2: Anderson’s spin control continues. Chris Anderson has told the Guardian that the errors were “a lot less” than the VQR suggests.

UPDATE 3: Chris Anderson issues a response on his blog, but refuses to address the verbatim excerpts cited above, despite additional requests in the VQR thread.

UPDATE 4: To offer a point of comparison, as it so happens, Ellen Ruppel Shell’s Cheap — a book that will be discussed on these pages in a forthcoming roundtable — has also paraphrased the Ariely poetry experiment on p. 68. And the specific ways in which Shell has paraphrased and Anderson has paraphrased demonstrate a substantial difference:

One can see a major difference between Anderson’s practice of cutting and pasting text from websites and Shell’s actual journalism. Shell actually went out to talk with Ariely. Shell then summarized Ariely’s example and explained to her readers why it’s important within the context of her point — in this case, the framing and the perception of pricing — and developed an independent explanation. Anderson, by contrast, merely used the Ariely example that was also used by Derek Sivers, and even closely parroted Sivers’s phrasing of the Ariely example.

UPDATE 6: It pains me to report that the Los Angeles Times‘s Carolyn Kellogg has written an ostensible “story” on Anderson. Unfortunately, Kellogg has failed to contact anybody other than Anderson and Mark Frauenfelder, who has professional connections with Anderson at Wired (which are not disclosed by Kellogg). With quotes like “My attribution failures aside, this is an important book,” the piece reads like it come from a press release issued by Anderson’s publicist. If Kellogg practiced objective journalism, she would have spoken with Anderson, Waldo Jaquith (who broke the story), and a plagiarism expert — thereby giving the reader an objective account with which to make a decision.