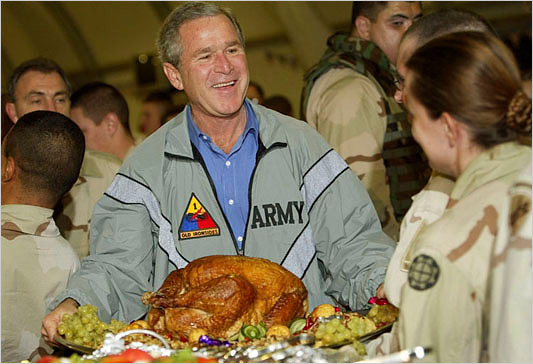 A remembrance of youth, triggered by a series of recent presidential photo ops

My memory is often hopeless beyond compare, but there are things I remember. Important things. Things that come back in the most unexpected of ways. Back in June 1994, I had the misfortune of listening regularly to Rush Limbaugh on the radio. I was working in a Sacramento copy shop, one of several jobs I was working to save up cash for my move to San Francisco that fall. The jobs had me working anywhere from 60-80 hours a week. I was a scrawny underfed kid, nineteen, just on the cusp of twenty, inexperienced. Despite my ability to type 100 wpm, I couldn’t seem to land so much as a lucrative data entry job. But I somehow talked my way into this morning copy shop job through a temp agency. (Some of my other jobs included doing filing for an insurance company, telemarketing funds for the Sacramento Symphony, working as a movie usher, working as a short-order cook — the job I probably liked the best and took the most pride in — and toiling at a Target snack bar. The latter was the worst job I have ever had. At Target, after you had spent the entire day immersed in grease, often without breaks, after cleaning the fryers and unleashing the remainder of your strength scrubbing the grill, they would literally lock you in the store and force you to restock before you could leave, which meant unpaid overtime and sometimes ten hours recorded as eight. And people wonder why I don’t shop at Target or Wal-Mart. But I digress.)

The shop was owned by a quiet, portly and agreeable man with thinning sandy hair, egg-shaped spectacles working wonders accentuating his two thin horizontal slats into an owl-like visage, and a bristling moustache. He was a friendly guy, fond of chatting with the post-teen, pre-college transfer hired help. He outsourced desperate young plebeians like me for low wages to perform mind-numbing tasks that he wouldn’t dare perform himself: in my case, collating thousands of high school newspapers and bland user documentation put out by fledgling startups.

Like many small business owners, he had a radio to get him through the day. On this radio, I was inducted into the world of Rush Limbaugh first-hand.

Limbaugh boomed and blustered like the strange charm of William Shatner gone horribly wrong. There was an element of McCarthyism in his voice. And there was no way to escape his DSM-IV cadences, even with the radio turned down. Perhaps because politicians had softened their voices for the tricky subtleties of television, Limbaugh compensated for radio by regurgitating the flamboyance of Winston Churchill and W.C. Fields. He talked as if he needed complete command of the entire AM radio bandwidth. So in performing my mundane job, concentration was of paramount consideration.

I tried to zone out by delving into the paperwork like a savant, thinking of things I was reading. Raskolnikov’s guilt or the exploits of the Pickwick Society, eagerly awaiting return to those pastures, magical places I had little time to wander through. But this was difficult, because I’d hear the word “liberal” every other minute, inscribed with the same hatred given to words like “cunt” or “nigger” or “motherfucker.” As far as I could tell, I was one of those “people,” even though my politics were rudimentary at best. (In my high school politics class, I was one of only two students to defend the right to burn the flag. The other person ended up as my brother-in-law. Go figure.)

One day, I had come in to the copy shop extremely tired. I had worked about sixteen hours the previous day, managing only about three hours of sleep. (My girlfriend at the time, whom I almost never saw, was exceptionally forgiving of my crabbiness.) Limbaugh came on. And I could no longer keep up the sanguine face, or control my sighs and dismay. The copy shop owner saw this, but was surprisingly forgiving. I confessed I wasn’t exactly a Dittohead, but I did ask him why he liked Limbaugh. He replied that he thought that Limbaugh was funny. Funny? Perhaps. Funny, if introducing terms like “Feminazi” was funny (although admittedly warranted in the cases of extremists like Valerie Solanas, whose legitimate points were undermined by the same hatred extant within the Moral Majority). Funny, if declaring anything even remotely left as Bolshevist was funny (on paper or in relaxed environs, yes; but with blathering audio while performing a mindless task, decidedly not).

Funny, yes. But with humor occluded by the dreariest of labor, possibly a bona-fide authority after years of a small business owner working long and hard for nothing.

But one day, Limbaugh eventually revealed his colors. On June 6, 1994, Clinton was in Europe to recognize the 50th anniversary of Normandy. And like any President, he staged the predictable photo ops. Clinton gave a speech. He walked lone along the beach of Normandy, preparing a cairn. Hardly surprising. All politicians are forced to embrace artificiality at some point. It’s only the most gifted politician who can make every moment feel natural.

And it’s hardly the kind of thing that someone would use as backup material for the shameful liberal cabal. But that didn’t stop Limbaugh. He tore into Clinton as if the photo-op was the very embodiment of evil. He declared it an insult to the men who lost their lives. Clinton should be ashamed of himself. And why hadn’t “the mainstream media” picked up on this? To this very day, it is one of Limbaugh’s textbook examples of Clinton’s “phoniness,” ironically enough, standing comparatively against Bush’s honest and sterling nature.

It was then that I knew that Limbaugh was unquestionably an irrational chowderhead let loose on the airwaves. 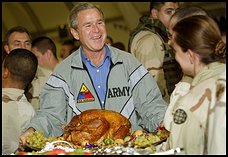 Which makes the recent Washington Post news that Bush ‘s Baghdad turkey was decorative all the more hilarious.

Ask yourself what is more artificial: (1) Standing in an admittedly staged position placing a stone upon a cairn, but with the process itself actually standing for some genuine expression of loss or (2) bringing a turkey to Baghdad, posing with reporters with it, but without anyone going to the trouble to eat the turkey! Shouldn’t Limbaugh be drawing upon the same duplicity here?

Personally, I’d rather see a President stumble a bit through a photo op than fall flat on his ass playing 52 Pickup with the flimsiest deck of cards in Washington.

[3/16/14 UPDATE: In addition to some corrected spelling errors, I was forced to update the links. An original version of this post directed to Valerie Solanas’s SCUM Manifesto, as hosted at an MIT page run by Olin Shivers (dead original link). I haven’t looked at this little essay in ten years, but, today, I work much harder for a lot less, although I enjoy all the work. If anything, the terrible labor conditions that I experienced at Target have become much worse in American life. In the late 1990s, it was still possible to accrue any number of part-time jobs. But a visit to any drugstore or a grocery store now reveals an overextended staff working around many closed registers. Who knew that retail conditions would deteriorate further? I wonder whatever happened to the guy who ran the copy shop. I was far too hard on him. He was very kind to give a job to a cocky young loudmouth. One thing I didn’t mention in this piece was my stint at Rally’s, a burger joint in Sacramento that stood on the southeastern corner of Madison and Manzanita — now long gone — where I worked my way up to cashier. At the time, and this was when I was in high school, a few customers compared my theatrical delivery through the speaker system to Rush Limbaugh. Limbaugh was really peaking at the time. I had never listened to Limbaugh for an extended period of time until those weeks in the copy shop. Perhaps there was a part of me that feared turning into him.]