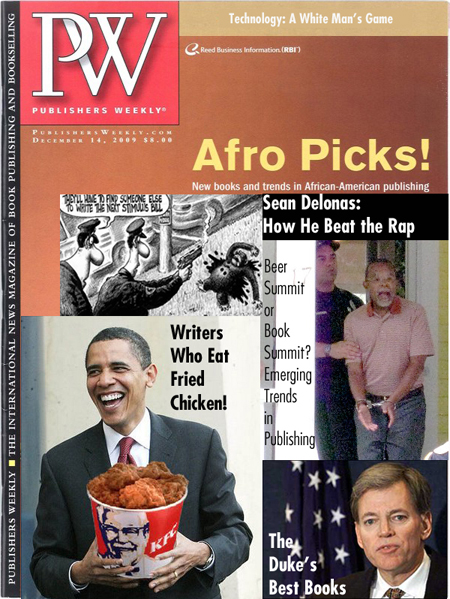 As reported by HarperStudio and HTML Giant, there is something more than a bit wrong about Publishers Weekly‘s new cover. But the original concept was much worse:

This morning’s Publishers Weekly features an alarmist “report” from Rachel Deahl that is more fixated upon rumors and conjecture than actual reporting. Deahl, without citing any particular source other than an unnamed “freelance critic” and Tribune communications manager Michael Dizon, has reported that the Tribune Company is planning to slash overall page counts and that the results will go into effect sometime in September. Of course, without specific quotes from book editors, none of whom returned Deahl’s emails (hasn’t Deahl heard of the telephone?), this is about as credible as an Ain’t It Cool News half-truth about the film industry.

But don’t tell that to the National Book Critics Circle, who picked up the item this morning as if it were the gospel.

I plan to conduct some independent investigations on this in the next week. If I can determine any answers or hard information, I will report them here. I’ll leave the rumormongering to Publishers Weekly.