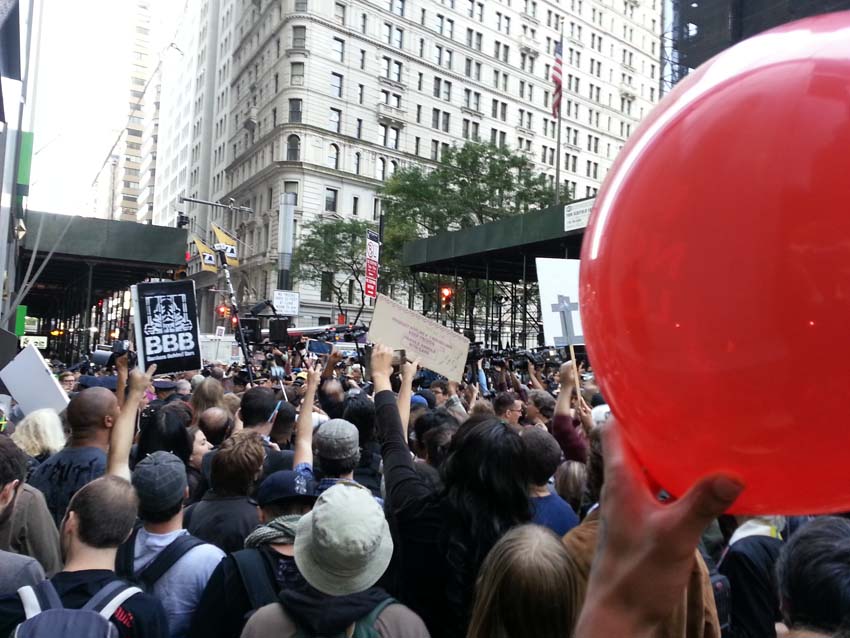 My report from the streets on the one year anniversary of the Occupy Wall Street movement.

They put up the steel grille barricades around the edge of Zuccotti Park on the first anniversary of the Occupy Wall Street movement, leaving a few hundred protesters looking for a workaround under the bright red cube sculpture across Broadway. But a few hours later on the other side of the park, a smiling group situated on the edge of Trinity Place was busy with brushes and thin placards. They were painting peace signs and placing these signs around the perimeter on a soft bed of newspaper to dry: bright green life and hopeful ovals just under the drab barrier prohibiting the perfect circle of year one. 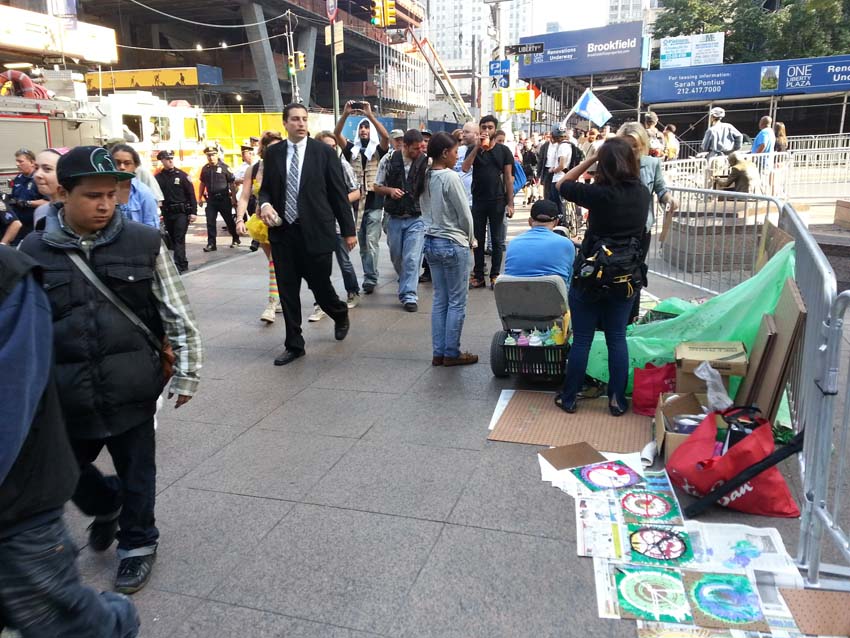 The protesters were matched in number by cops, many in riot gear. And they swarmed with a hunger for arrest. Numerous whiteshirts had been unrustled from their beds at an early hour and many seemed indignant about the renewed duties. I observed one whiteshirt shove his way through a crowd at Nassau Street, his meaty hand giving a hard singular push at any shoulder that got in his way. The checkpoints around Wall Street felt thicker, more reminiscent of East Berlin. Like last year, there were police mounted on horses beyond these points. But as the morning rolled on, the New York Police Department opted for motorcycles, later parking them neatly and voluminously next to the Charging Bull, guarded so beyond measure that you almost wondered if the cops had received some weird lead about two hundred armed men planning the biggest theft in human history. 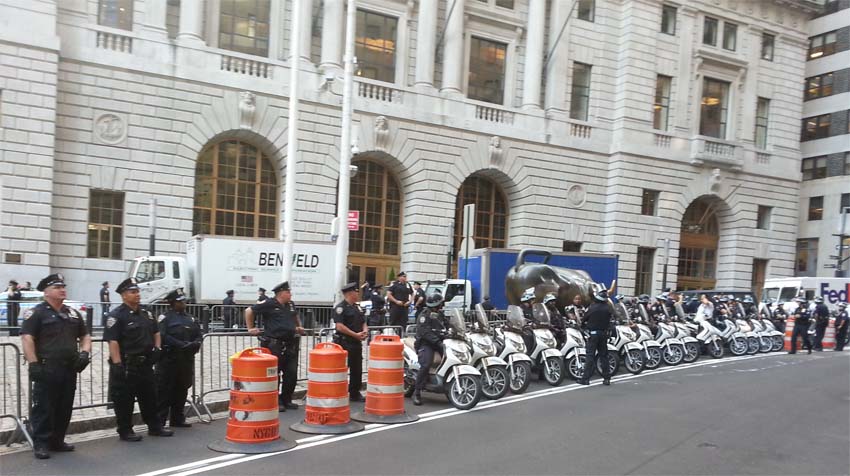 It was the absence of visible activism for so long that made the authority feel more formidable. The extra force inspired the cops, with their bright white ties swaying from their belts, to manacle more people and make more arrests. By 3:30 PM on Monday, the official tally was 146 people nabbed for disorderly conduct. This included the artist Molly Crabapple, at least one NYU professor, three handicapped activists, and a few journalists. There were rumors circulating that the figure was close to 200. Some people told me that the cops were dragging people off the sidewalk to arrest them for stepping onto the street, but I didn’t see anything like this. But during one highly charged moment near Nassau Street, I witnessed four people arrested in less than five minutes. 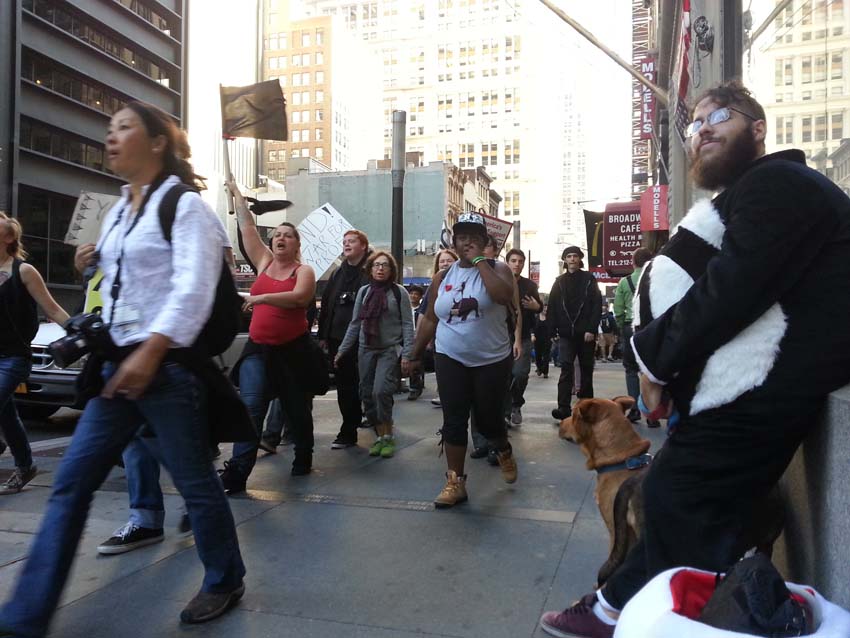 The protesters were peaceful and calm, but this was not the ragtag group that had formed one year ago. It was a seasoned crew familiar with the stakes of income inequality and what they were in for if they got arrested. They felt the rightful need to claim their anniversary, often doing so with messages scribbled into the sidewalk with colored chalk. Three people said happy birthday to me over the course of a few hours, and the tone was so sincere that I wondered for a mite if some authority had changed my birthday to September 17th without bothering to alert me before coming to my senses. There was music and glitter emitted into the air. There was impromptu dancing, often in the middle of intersections. I was especially fond of the “crow technique” that a group of students adopted at the corner of Cedar and Broadway, which involved fluttering their arms into the air and making pleasant squawking sounds. 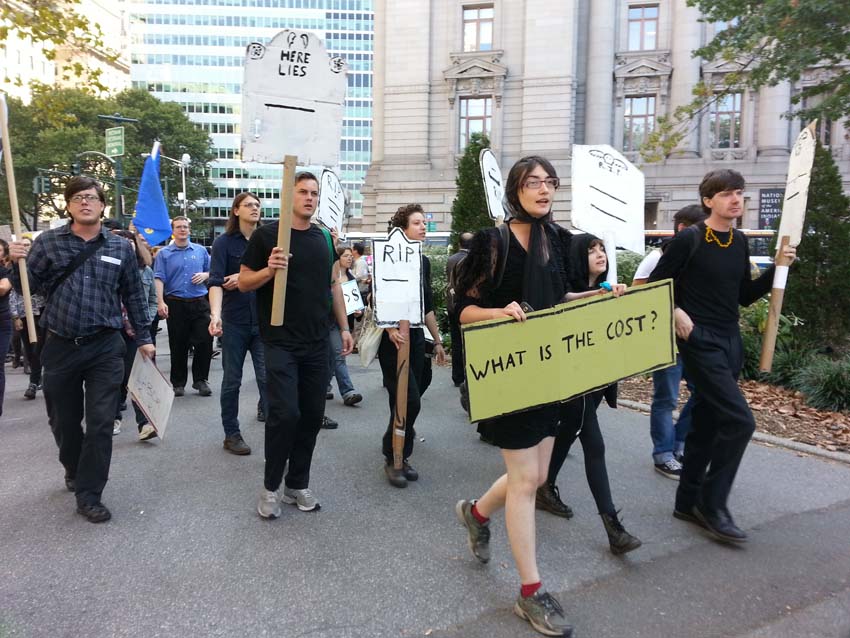 But when protesters repeatedly shouted “Shame!” for the umpteenth time in response to an arrest, a few protesters next to me remarked on how shame had lost its meaning. The hysterical calls to “Arrest the bankers! They’re the real criminals!” felt more like a dull platitude than a careful considered irony. There was also a bleaker humor this time around, with some protesters dressed as doctors and leaving “blood money” around the area. Their hands were saturated in fake blood, and it was doubtful that Rick Santorum would shake them.

It’s pretty clear that Wall Street has no interest in beginning a meaningful dialogue with the Occupy movement, yet the neighborhood isn’t quite willing to accept the protesters as a regular fixture. I watched one angry white collar man stomp out bright red balloons outside a building with an amazing ire, as if they were newly discovered mice scurrying around the floor of a ritzy apartment. I listened to another man, putting in four orders and wrestling with an allotment of hastily collected twenty dollar bills, complain to a delicatessen worker about how nobody else in the office wanted to leave the office and get breakfast. I saw a scavenger pick up bottles and cans for extra cash. There were still blue-collar workers on the clock and they moved dollies through the thick streets with a great patience. There were more people in the streets, but it was business as usual.