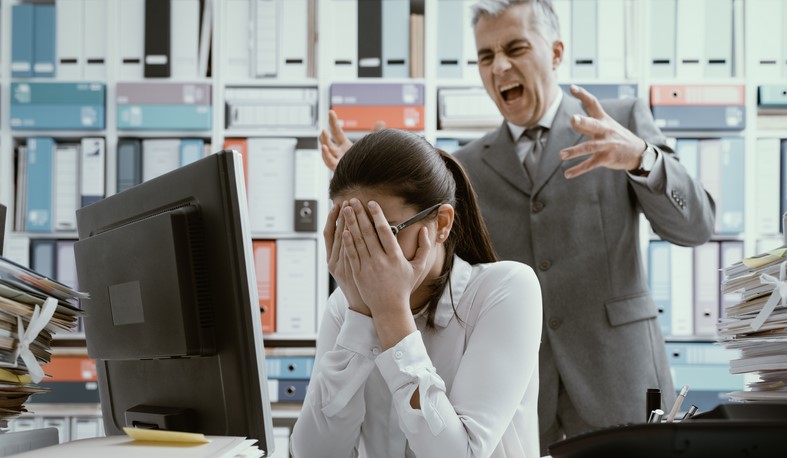 In which my hard work at a regular gig is kiboshed by a wildly abusive and unhinged supervisor who lives to scream at people.

For the past several months, I have been privileged to work at vaccination centers in various parts of New York City — predominantly at the Aqueduct Racetrack. I was the guy who logged in patients before they got vaccinated. In the early stages of the vaccination process, when the Racetrack was very busy, the table that I would be assigned to would regularly do 5% of the daily numbers (this when there were 25 tables) and a day in which we did 200+ vaccinations was not uncommon. I am a supremely hard worker, but I regularly cracked jokes, kept up a level of Ted Lasso-style positivism and bonhomie, and even danced at times to entertain the patients (as well as my co-workers and the National Guard) and put them at ease. I treated every patient like a special human being, remarking favorably on what they were wearing and relating to them with my charm, my wit, and my social skills. I got many of them to laugh and to feel less nervous and, in some cases, to feel genuinely excited about the prospect of being vaccinated. Largely because I knew that the decision to get vaccinated was an emotionally fraught one. So I tried to do everything in my power to make patients feel as comfortable as possible. In short, I turned them around. I uplifted them. I did so because I very much believed in the noble goal of vaccinating as many New Yorkers as possible.  New York has been very good to me. And I wanted to give back. Because I believe in science. And I remain passionately and resolutely aligned with the mandate and spirit of New York State.  I would often encourage patients to bring in their friends.  And, for this, I was a lively and entertaining draw among the other nurses, the doctors, and Yamil Spreight-Miller — the excellent former head of that site who looked out for patients and staff alike.  Yamil was a top-notch supervisor who ran the Aqueduct like a champ and who took an interest in everyone and who genuinely cared about the work.  I cannot offer enough plaudits about Yamil.

To offer Miss Russell some benefit of the doubt, it’s certainly true that I am an eccentric and exuberant man. Someone who offers quirky energy and heartfelt empathy to help make any job or unpleasant task endurable. As supervisor, Miss Russell is certainly within her rights to deny me work if I don’t fit her exacting standards — never once vocalized to me or anyone — of what it is to be a flow coordinator. But I cannot be anybody other than me. And my track record has abundantly demonstrated that my approach has not been a disastrous one; if anything, quite the reverse.

I was recently called back to serve as scribe.  And today I learned that Yamil had been replaced by Rosezetta Russell, who regrettably seemed to speak in one harsh language rather than three beautiful tongues.  While I love all the people who work at the Racetrack (and they, in turn, were happy to see me back) and I have greatly enjoyed the job and cheering patients up with jokes, vivacity, and positivism, the new supervisor Rosezetta Russell is an abusive, disrespectful, needlessly abrasive, and incredibly rude person who screams at everyone and berates all.

This afternoon, I was even screamed at (over a microphone) by Miss Russell for no reason at all — as I was attending to a patient (Miss Russell’s behavior was wildly unprofessional and the poor patient — who I believe had PTSD — was already nervous enough about getting his booster shot; Miss Russell’s unhinged verbal assault on me (and, by extension, the patient) made it very difficult for me to do my job) — this when my lunch break was delayed and my blood sugar was low. But I still kept my cool and stayed calm and professional.

Nobody at the site likes Miss Russell.  I cannot understate this.  I had no idea how unhinged she was, but the anecdotes and stories about her are legion. And when she went after me (the “new” guy who had actually been working at the site for a long time), many of my co-workers — including some of the National Guard — checked in to make sure that I was okay.  And they filled me in on Miss Russell’s long history of screaming at and berating workers at the site.  It is my understanding that one nurse left today because of Miss Russell’s obscene antics. It is also my understanding that scribes and vaccinators alike are leaving the site in droves. It is not because they don’t want to work. It is because Miss Russell is a pusillanimous and castigating bully who does not value anyone. While a certain amount of unusual behavior comes with the territory for a job like this (the shifts are long; the breaks are few), the idea that anyone working a twelve hour shift would be subjected to toxic and uncontrolled madness is beyond the pale.

I make it a point of pride to work very hard, stay positive and in good humor, and to treat everyone around me with dignity. (In my early days at the Aqueduct, I would often initiate mock competitive races with other tables to see who could get the most numbers. This resulted in many of my fellow colleagues excelling at their job.) Miss Russell, by contrast, lives to scream at people and to treat them like dirt.  She is a vicious narcissistic tyrant without a shred of empathy. I suspect that she has kept her $79,000/year job for fifteen years at the Department of Health because she is regularly moved around and her supervisors probably figure that any havoc she unleashes at one site will be resolved by her inevitable reassignment. Since many of our patients today were getting booster shots, and I was working at one of only two tables who were handling this, I gently made the suggestion to Miss Russell that we should open up a third table to accommodate a patient influx.  It was a pragmatic idea designed not only to alleviate a scenario in which we could be faced with dozens of patients walking in at one time, but a remedy that would also allow the labor to spread among numerous tables. Miss Russell took my benign suggestion as casus belli.  For this, I was screamed at and berated by Miss Russell.  And I have just learned from the agency that my shifts for this week have been canceled and that I am no longer welcome at the Aqueduct Racetrack.

I understand that the Aqueduct is having difficulty filling up shifts these days.  And that is because of Miss Russell’s toxic behavior, which is driving many good people away.  The people who work the Aqueduct genuinely care about patients and their job.  They work passionately and ardently to sustain a smooth workflow and a friendly camaraderie with patients.

Now something that I very much enjoyed doing in the name of public service has been taken away from me because Miss Russell — a joyless and needlessly irascible bully — apparently despised me — a positive and easygoing man who, for all of his unusual manner, tends to get along with people — because she simply doesn’t possess basic social skills and she resents anyone who can make other people laugh or feel at ease under circumstances that are often difficult for people. Or perhaps because she operates from some unbalanced impulse to demean everyone who surrounds her. Misery, as the old saying goes, loves company.

I am not someone who stays silent when I am abused and disrespected — especially when there is no logical justification. Miss Russsell took one look at me and decided that our relationship would be founded on instant hatred. She has done this with many others. I have sent an email to the Department of Health, asking them if this the kind of vilifying figure who they want to have spearheading a vital vaccination hub.  I can tell you this much. If I screamed at people in the way that Miss Russell regularly bellows at staffers at the Aqueduct, then nobody would want to work with me. And rightly so.  I would never think to treat any co-worker with such wanton disrespect. But the good people who work the Aqueduct stay silent because they believe in the greater mission of vaccination.

I am putting this essay out into the universe to warn people about Rosezetta Russell’s alarmingly toxic and unhinged behavior, to hope (likely in vain) that her bullying will be mollified or corrected by anyone in Albany (do they even exist?) who comprehends that this is no way to run an operation. No professional should act this way. And nobody in charge of an essential vaccination center should be screaming at the hard-working people who work long hours to keep it running.