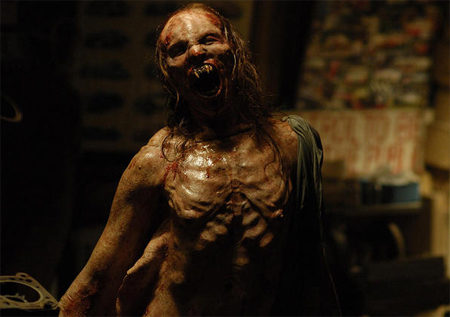 The vampire film has needed a kick in the ass for quite some time. Popular audiences have endured the emo complacency of the Twilight films, suffered through the soporific bastardization of Bram Stoker with 2004’s Van Helsing, and settled for the mediocre Underworld trilogy — all relying on tired and tedious tropes that have made recent vampire movies about as desperate as a burned out bookkeeper flipping through a community college catalog for a new hobby.

But Daybreakers is a vampire flick with a brain: a fresh and much-needed corrective to the past decade’s measly offerings. It may be the best American vampire film (courtesy of Australia) since the original Blade. The film manages to deliver on its premise, set ten years from now, largely because it has taken the time to consider the social implications of a world populated mostly by vampires. Cars are equipped with a Daytime Driving Mode, with tinted windows permitting vampires to drive during the day. City buildings are denuded of windows, modified to include corridors high in the sky. A Subwalk has emerged as an adjunct to the subway, which permits vampires to amble beneath an urban world, protected from daylight. Homeless vampires hold cardboard signs reading STARVING NEED BLOOD and bare their fangs at the rich. Cafes now offer coffee tinged with blood, and self-important yuppie vampires still berate baristas. There are even gated suburban communities, whereby those who provide the blood are rewarded with secure enclaves.

But when 95% of the population relies on human blood to survive, and humans are being increasingly munched on, there’s bound to be problems. As one vampire puts it, “Life’s a bitch and you don’t die.” Daybreakers presents blood as a commodity that is just as exhaustible as oil, offering a subtly creepy Hubbert’s Peak analogy that aligns nicely with the distressing prospect of human genocide. But when any commodity declines, the poor will be the first to suffer. And it isn’t too long before those vampires who cannot afford blood are transformed into wretched winged monsters and chained “traitors” are led in daylight before an assembled shaded audience to demonstrate the consequences of questioning big business.

This premise is buttressed considerably by Sam Neill camping it up as a sleazy industrialist and by Ethan Hawke (playing a vampire researching a surrogate for the diminishing blood supply) approaching this material as if he has been cast in an Ibsen play. Michael and Peter Spierig — the writer-directors behind this fun little flick — wisely understand that any good vampire movie requires these varying levels of performance. They’ve even managed to recruit Willem Dafoe as a former vampire turned human vigilante, who brandishes a crossbow and proudly announces, “My friends call my Elvis.” I can’t really complain much about the process that turns Elvis human. It’s about as plausible as the semi-cheesy procedure offered near the end of Kathryn Bigelow’s great flick, Near Dark.

The Spierig brothers give this film a suitable fluorescent look, where each individual vampire carries the combined pallor of twenty Peter Murphy acolytes. They don’t hesitate to depict starving vampires hungrily licking walls, and that desperate hunger reinforces the narrative stakes. The filmmakers flounder somewhat near the end, largely because their characters can’t always match the conceptual complexity. One can level the same minor complaint against District 9, which replaced its interesting take on race with fights and explosions. But then one expects this sort of thing from a movie of this type.

But Daybreakers must be lauded. It is a rare vampire movie that comes layered with so many intriguing ideas. The 2012-boosting Roger Ebert has dismissed it, because of “fierce fights and bloodshed.” But if you cannot accept a vampire movie with “fierce fights and bloodshed,” particularly with so many socioeconomic factors at stake, that’s too bad. For Daybreakers has thought out its setting with more alacrity than much of its duller non-genre counterparts.