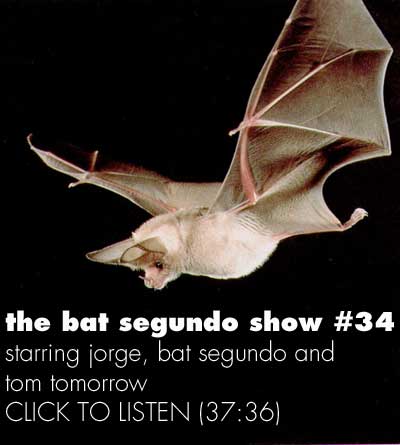 Condition of Mr. Segundo: Explaining his recent arrest for littering.

Subjects Discussed: The relationship between text and image, Moebius strips, clip art, working in digital, color vs. black and white, blogging as help, Warren Ellis, Tom the Dancing Bug, New Yorker cartoons and captions, fonts, the influence of the 1950s, on becoming a political cartoonist, lettering, analog vs. digital, the crazy policies of the New Yorker art department, Teletubbies, what happened with the Mondo Minishow version of This Modern World, static comics vs. Flash, pause panels, getting pulled from U.S. News and World Report, reaching mainstream audiences, on not getting booked on The Daily Show and The Colbert Report, preaching to the choir, the origin of Sparky and the Bearded Liberal, and finding humor immediately after the 2004 election.