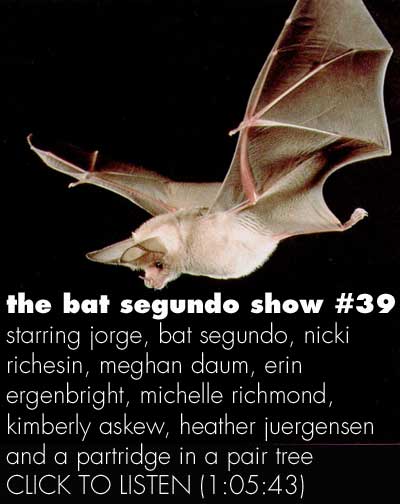 [PRODUCER’S NOTE: Every effort has been made to preserve and process the audio. But keep in mind that the group was in a noisy bar and there were considerable microphones involved, which all picked up some background noise. So for those who protest the din, we note that the ambience clears out a little about twenty minutes into the podcast.]

Condition of Mr. Segundo: Strangely libidinous after his return from the desert.

Subjects Discussed: The strange woman on the May Queen cover, epigraphs, magazine editors hostile towards women’s issues, the “selfishness” of opting against the biological clock, mothers vs. non-mothers, Diane Keaton, Sharon Stone in Basic Instinct 2, Dolly Parton, Searching for Debra Winger, plastic surgery, agism, self-worth and body image, field trips to Planned Parenthood, sex within marriage, finding one’s place via environment, San Francisco vs. Los Angeles, the New York Times Style section, the advantages of “zero birthdays,” achievements when living in one’s thirties, the infamous “grups” article, urban vs. rural lifestyles, Mom Jeans, the divide and similarities between twentysomethings and thirtysomethings, finding a life path, women’s anthologies, the variance of opinions on aging, the chick lit controversy, the In Her Shoes film adaptation, Jhumpa Lahiri, the danger of pink covers, taking Curtis Sittenfeld to task, cognitive taxonomy, “chick” labels and the publishing industry, Marilynne Robinson, the lack of women film directors, women and work, the hesitancy to write about work, the gender income divide and how the essays were selected.