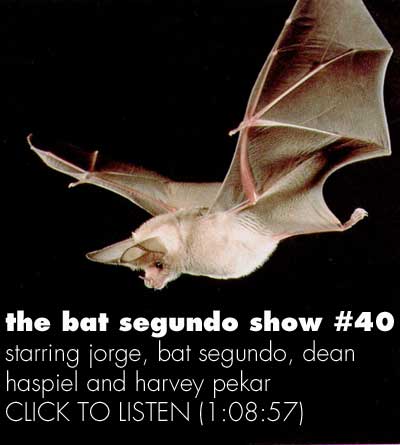 Subjects Discussed: How Haspiel hooked up with Pekar, the origin of the American Splendor movie, the origin of The Quitter, growing as a storyteller courtesy of “hieroglyphic rants,” paneling, DC Comics scripts vs. Pekar scripts, visual reference and the advantages of the Internet, the inside scoop on Jonathan Ames‘ The Alcoholic, the sudden legitimacy of comics, Pekar meeting Michael Malice, what makes Malice’s tale a “Pekar story,” polar opposites, conflicting ideologies within Pekar’s narratives, how Pekar challenged Malice’s language, boxy layouts, collaborating with illustrators, episodic stories vs. long narratives, the stigma against quotidian narratives, narrative adjustments in the American Splendor movie, the portrayal of pain in Our Cancer Year vs. the American Splendor movie, appearing on David Letterman and being mocked, the reasons behind Pekar’s prolificity, jazz criticism, on the many names Pekar granted himself during the American Splendor run and some of the factors that determine which artists collaborate with Pekar.