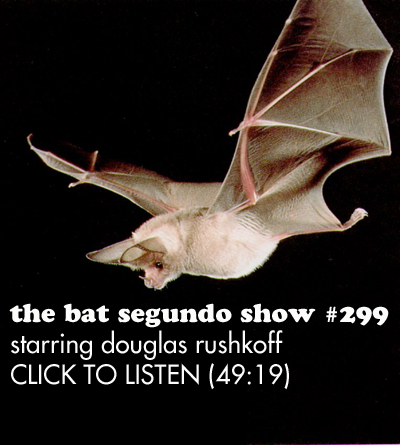 Douglas Rushkoff is the author of Life, Inc.

Condition of Mr. Segundo: Surprised to discover someone more contentious than he is.

Subjects Discussed: The wage labor system established in Portugal in 1253, Daily Life in Portugal in the Late Middle Ages, whether the day laborer can stand up, children and branding, people who attend Wealth Expo, the real estate market, pyramid schemes, The Secret, Maslow’s hierarchy of needs, the relationship between self-actualization and helping other people, social interaction, Rushkoff publicly announcing his “anonymous” good deeds, Rushkoff’s anger and crazed speculations on whether or not the Correspondent is a journalist or a Colbert-like persona, why Rushkoff couldn’t just walk into a Westchester school and drop off some comics, the WTO and Ricardo’s theory of comparative advantage, whether Ricardo (and Paul Samuelson) is applicable to individuals and small businesses, the applicability Nash equilibrium, game theory and behavior, the meaningful life metric, cultural values of the 19th century and the home as a fiefdom, most of the world population now living within cities, New York City’s development, whether or not regular people can afford to live in the city, Birkdale Village, NC and New Urbanism gone awry, Rushkoff’s judgment on places for community, tangents about whether a Mickey Mouse watch purchased at Disneyland is real, what “real” is now about, whether brands represent a legitimate common connection, the consequences of viral marketing and Rushkoff not striking it rich, why Rushkoff opted to publish with a corporation, whether or not the Correspondent is “mean,” and whether or not this is the worst interview Rushkoff has done.

Correspondent: You write, “A kid’s selection of sneaker brand says more about him than his creative writing assignments do and is approached with greater care.” Let me ask you something, Douglas. Do you remember the brand name of the high school sneaker that you wore?

Correspondent: Really. What was it?

Rushkoff: I wore Keds. And then I wore this JC Penney brand. But by high school, I was in Scarsdale. And everybody else wore Pumas and Adidas. And we just wouldn’t spend the money We couldn’t spend the money on it. Because my parents had spent everything they had to get us into that neighborhood. And I was teased actively and relentlessly. Because I had a fox on my shirt instead of a little alligator. 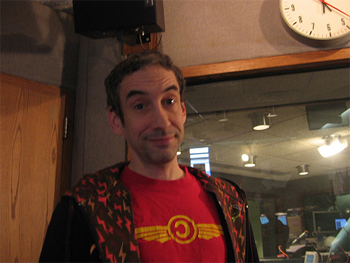 Correspondent: But the writing that you did. The times that you had. Surely now, decades later, you remember those times. They matter more to you than the brand name on that sneaker. And not only that. But it seems to me that you had a situation. I had a similar situation in terms of having hand-me-downs and that kind of thing.

Correspondent: But such a statement is a bit of a generalization. Do you think that this applies to everybody? Every high schooler?

Correspondent: Okay, well then why….

Rushkoff: Why do you pull out a single sentence from a book and try to say that my entire argument is based….

Correspondent: I’m trying to figure out where you’re coming from in terms of how this branding….

Rushkoff: I’m saying that if you talk to most high school kids about the amount of effort that they put into a paper and how much they thought about it — try and have a deep conversation with them about a paper — and then have a deep conversation about which brand of tennis shoe they bought and why. It doesn’t mean they’re stupid. It means that they have more depth of knowledge and experience and thought into who is Nike, what does Nike mean, what is the brand image mean than what did Abraham Lincoln do with the railroads in that paper I just wrote.

Correspondent: Even inner-city kids, you would say? Or kids who have parents — like your situation growing up — that don’t have the option of putting hundreds of dollars out for a high-brand sneaker.

Rushkoff: I don’t think. I think in many cases the poor have more relationships with those brands than the wealthy.

Correspondent: I ask this question in light of other examples that you use in this book. You attend a Wealth Expo at Jacob Javits.

Correspondent: And you conclude that a lot of the people who attend this expo were there to essentially improve their circumstances. They were almost rube-like.

Rushkoff: Right. I don’t think that the people going to Wealth Expo are spending the two or five hundred dollars to have a cynical entertainment experience, or to laugh at Trump. I don’t think they really are getting it as, “Look at this funny bizarre cultish situation.” I think they are there in earnest. I think they want to make money by going.

Correspondent: But I’m wondering. Wouldn’t your scope have been broadened if you had followed, say, Charles and Sandra two or three years later to see if someone actually got money out of these DVDs that were thrown into the audience? I mean, I didn’t see in the book any positive results from Wealth Expo and I’m wondering if you were able to determine any over the course of your peregrinations and your inquiries.

Rushkoff: I was more interested in the Wealth Expo as a phenomenon. I was more interested – I mean, it’s true. We should follow The Secret. It is possible that the people who are using The Secret are developing a spiritual path through which humanity is going to be saved. It is possible. You know, and it’s not — I think that the probability of it is so low that I don’t want to dedicate my life to pursuing that. I think that it is such a blatant scam that it doesn’t even deserve that long-term sociological study. But anyone who wants to go do that, I welcome them to do that. I was more interested in the fact that even after the real estate crisis — now it is my belief and you don’t have to buy this either — it is my belief that it has been revealed that many banks and many Americans made some mistakes in the real estate industry and in mortgage banking. And you can argue this one. But I think that it has been almost proven that there’s a crisis of foreclosures and mortgage-backed loans. And those kind of things have turned out not to work the way they were planned to. And I think that’s almost accepted.

The Wealth Expo that I went to, which was happening after the mortgage crisis, was trying to teach people how to take advantage of other people going into foreclosure. Most of the people I spoke to at the Wealth Expo were people who were in foreclosure. So they were looking at how to try to make money off of people who were about to go through the same thing that they did. And at an event that had fairly accepted charlatans with Jack Canfield and Donald Trump and, you know, get-rich-quick real estate DVD schemes that you see on TV at night. You know. Flip that house. That they shared the stage with Alan Greenspan was fascinating to me. Because I feel that he understands that this really is the real estate market. And maybe it will work. Maybe you’re right. Maybe the way to get through it is to scam. Let’s join Amway. Let’s join Mary Kay. Let’s create pyramid schemes and MLMs. Let’s flip this house. Let’s build something out of nothing. And maybe there’s another few laps in that horse yet. Okay. Go for it. If you believe it.

Rushkoff: I think the opportunity rather is to consider whether there are Americans who might choose to create value with their work. To make something. To provide a good or service to someone. And that there’s still time to build an economy on the exchange of value between people rather than pyramid schemes.

Correspondent: But this pyramid scheme. The Secret. The Wealth Expo. Whatever. Amway. People are still going to these things. They’re flocking to these things. This may, in fact, stand against your people-based economic solution that you’re suggesting here and at the end of your book. But…

Rushkoff: Why is that? I don’t understand. So you’re saying — so that lots of people in a country end up killing other people. So that stands against the logic that people might have fun not killing each other.

Correspondent: Maybe you could…

Rushkoff: Well, what are you saying?

Correspondent: Well, what I’m asking here. Perhaps you could explain why people continue to flock to things like The Secret while the 600 years that you document in this book demonstrate that corporations are essentially in control and exploiting….

Correspondent: You go after Maslow in this. Do you think Maslow’s a pyramid scheme?