Errol Morris appeared on The Bat Segundo Show (#205). Morris is most recently the director of Standard Operating Procedure. (There is also an accompanying book written by Philip Gourevitch.) 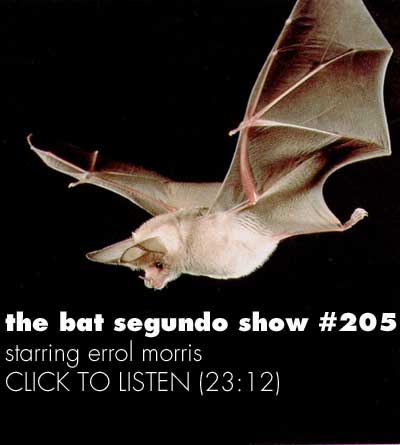 Subjects Discussed: Susan Sontag’s “Regarding the Torture of Others,” the American cycle of photographing physical abuse, finding out what we’re looking at before drawing conclusions, the differences between a still image and a moving image, reenactments, guiding the viewer’s ability to map reality, Comte de Lautréamont, misinterpreting Crimean War photographs, the milkshake toss in The Thin Blue Line, basing an illustrated montage on a line from an interview, Sabrina Harman’s thumbs-up gesture, Harman and the Cheshire cat, Paul Ekman, perceiving the bad apples, what makes Morris angry, little guys taking the blame, Morris’s fondness for pariahs, extending understanding, whether flying subjects into Cambridge creates truth, Shoah, and Werner Herzog. 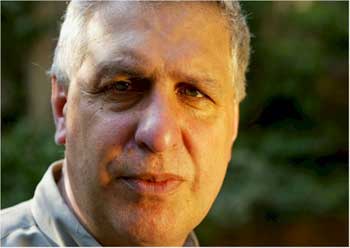 Correspondent: I actually want to bring up your most recent article for the New York Times, in which you delineated the difference between a single image and a moving image, in the sense that a moving image involves trying to create a map of reality. Because you’re not paying consistent attention to the actual moving image. But here you are with a film that has reenactments as well as interviews. And so I’m wondering: to what degree do you guide the viewer’s sense of mapping reality? Or is this a kind of cinematic device that is similar to, say, for example, the writings of Lautréamont in which he has this narrator who guides the reader and this is your effort to help out the viewer through the reenactments and through the juxtaposition and through the editing?

Morris: I think it’s both. I’ve never been compared to Lautréamont before. Here’s what I would say. There’s a movie. A movie is a movie. But you can also ask what is behind the movie. Was my intention to investigate the story? Was it my intention to find out new things? It’s self-serving of me to say so, but I would say yes! I mean, what’s the idea here? The idea is there is this set of photographs. They’ve been shown all around the world. Hundreds of millions of people have seen these photographs. I don’t think that’s an exaggeration. But do we really know what we’re looking at? Has anyone talked to the people who took the photographs? What actually was going on in the photographs? I’ll give you an example. One picture that Susan Sontag remarks on is the picture of Sabrina Harman with her thumbs up. Smiling. The body of an Iraqi prisoner. Al-Jamadi. A lynching? I would say yes. But who is responsible? You look at the picture and you think, Ugh! It’s the woman in the picture. The smile! The thumbs up! She’s the culprit. She’s implicated. We come to find out. Wrong! Wrong! So this is an ongoing problem that I have with how photographs are interpreted in general.