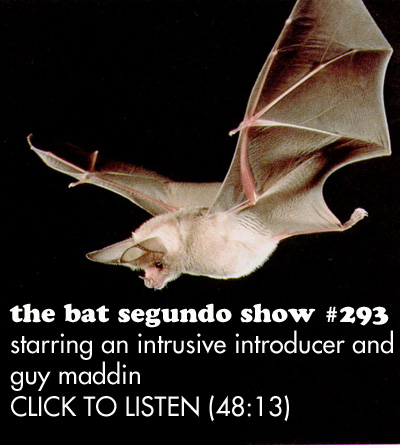 Guy Maddin is most recently the author of My Winnipeg, a book version of the film of the same name. For listeners who are fans of reading and watching films, this conversation accounts for all experiences and contains more than a few prevarications.

Condition of Mr. Segundo: Reconsidering the veracity of his topography.

Subjects Discussed: Whether living in Winnipeg for many year makes one an expert of Winnipeg, expertise and confused feelings, the importance of not straying from your methods, pleasant feelings and hellish depictions of Winnipeg, the strength one obtains from retellings of Icelandic sagas, the difficulties of laughing at smallpox plagues, “My Winnipeg” vs. “My New York,” Marcel Dzama, artists doing their bit for Winnipeg, being murdered by a puck, Winnipeg purse-snatching, being indoors in Winnipeg, Canadians who are being unduly rattled by Americans, James Frey and the problems with American memoirs, finding the disclaimer, naked laps, getting a nude model in Winnipeg and Manhattan, quick cutting in Maddin’s films after 2000, title cards and Godard, walkout ratios in Maddin’s films, smelling the mildew in the tableau, live elements to Maddin’s films, J. Hoberman’s assessment, Maddin reading his own press, the IMDB, Internet ego searches, getting rid of obsessions, having to live with Guy Maddin the character, Darcy Fehr as the only actor to play “Guy Maddin” twice, the Seattle Guy Maddins, having an actor impersonate Guy Maddin at a Chicago event, why Guy Maddin hasn’t played himself, whether or not Darcy Fehr is Maddin’s Jean-Pierre Léaud, similarities between Brand Upon the Brain‘s Sullivan Brown and Antoine Doniel, redacted dialogue in My Winnipeg, Ann Savage, the OCD quality that Winnipeggers have, recurring handshakes, ramming the audience over the head, editing lessons learned from Cowards Bend the Knee, title cards, actors who performed scenes in several different languages in the early sound era, Maddin’s shift from storyboards to spontaneity, editing speed and cramming ideas, good actors vs. bad actors, George Toles’s dialogue, the official report on the Guy Maddin Casting Couch, hockey locker rooms, chorizo metaphors, walking and coming up with ideas, Guy Debord, W.G. Sebald’s The Rings of Saturn, how walking gives you courage, the advantages of sleeping in hallways and on ladders, time travel and peregrinations, the grim nature of the future, and not being a great planner. 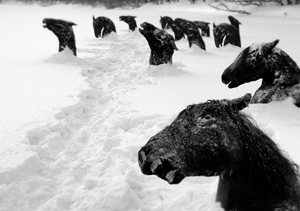 Correspondent: If I were to say My New York, you would look at me and declare me the world’s ultimate narcissist….

Correspondent: …and yet, when you say My Winnipeg, you can get away with that. And I think that you have a little bit of advantage being in Winnipeg and being able to say that. I really wish that I could say My New York, but I would just be looked at as if I had the biggest head in the world.

Maddin: Well, so many people have done New York too.

Maddin: I’ve got the advantage of just being among a small handful of artists doing it. The artist — the now New York-based artist — Marcel Dzama from Winnipeg has been doing Winnipeg quite a bit. I was out for drinks with him last night and we were chatting about how we’re doing our little bit to keep Winnipeg on the map. But things happen there on their own. They’re always kind of remote outpost kind of things. And stark and grizzly things. You know, someone murdered by a puck. Or Susan Sarandon’s jewel theft turned into a disembowelment. And I don’t know, a bus riding decapitation. Most recently, I just returned to Winnipeg for a couple days and the first story I read in the paper was about a gang of teenage girls who roam the streets and hack with a hatchet the purse strings of women walking around near them. One purse snatching was foiled by the purse holder flinging a cup of molten hot Tim Hortons coffee in the assailant’s face. I don’t know. There’s just this kind of stuff going on all the time. And obviously, it’s not unique to Winnipeg. But it seems like the headlines are being written by a 19th century translator of Brothers Grimm stories half the time.

Correspondent: Or perhaps some of the people who commit these crimes are doing so to alleviate the intense indoorsdom of being in Winnipeg six months of the year.

Maddin: Yeah, exactly. Cabin fever. It’s that kind of year. And they’re just writing their own legends. We don’t really — Canadians don’t really talk about their history. They don’t really boil down legends or folk tales the way every other country does. Possibly because we’ve been dwarfed so badly — rattled so badly by our presence right next to America.

Correspondent: I’m sorry about that. Really.

Correspondent: You don’t deserve it. There’s a lot of great things that come out of Canada.

Maddin: No, no. Whatever. You know, my temperament is part of that whole thing. And I kind of like it. I kind of like feeling like when you roll over, I should look out.