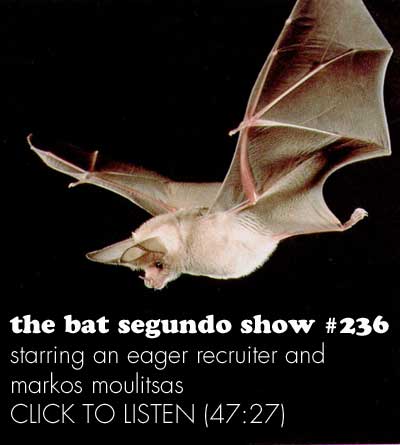 Markos Moulitsas appeared on The Bat Segundo Show #236. He is most recently the author of Taking on the System.

Condition of Mr. Segundo: Refusing to cut and run from Kenny Loggins and company.

Subjects Discussed: Speculation on the effectiveness of protests, influencing the gatekeepers, Amy Goodman and other journalists arrested in St. Paul, small-time bloggers, Cindy Sheehan, “Free Mumia” promoters and promoting a message of unity, isolating activist sectors, Peter Dauo’s triangle of influence, Vietnam, whether or not Daily Kos has become a gatekeeper, getting media attention, Sheehan’s run as an independent candidate against Nancy Pelosi, Kucinich and the impeachment option, Ned Lamont vs. Sheehan, political narrative, the aborted Democratic presidential debate on FOX News vs. Obama’s appearance on The O’Reilly Factor, Sarah Palin, getting through to the other side, Moulitsas’s conclusions about FOX News viewers*, spreading misinformation and conjecture vs. open source journalism, why Moulitsas hasn’t employed a fact checker for Daily Kos, whether Moulitsas considers himself a journalist, and doing anything to win for politics. 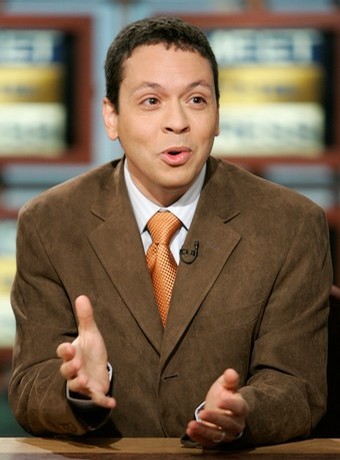 Correspondent: I wanted to actually ask you about your site. I mean, the Daily Kos was responsible for spreading the rumor that Sarah Palin’s son, Trig, was her daughter’s son. Howard Kurtz at the Washington Post actually asked you about this. And you said to him, “Our people are doing the vetting. Even if some of it is hitting dead ends, other ones are striking direct hits. My role is to sit back and let the citizen journalists do their job, and I amplify the stuff that shakes out.”

But I’m wondering, if this is misinformation or conjecture, what is this doing to increase the level of political discourse? Or to even help the credibility of Daily Kos? I mean, aren’t you essentially doing the exact same thing as the people who looked to Al Gore and said, “Oh, he invented the Internet.” Even though, as you pointed out in your book, well, it was intended as a joke. It was completely misconstrued. I mean, what of this? I know you have an engineer who you’ve hired. Why not hire a fact checker? Why not try to get it right? Why not actually go ahead and push the levels of reason higher than the mainstream newspapers who sometimes get things wrong?

Moulitsas: So you’re talking about me becoming the ultimate gatekeeper online by stifling anything that hasn’t been vetted by the great and mighty Kos. It is open source. It is a community. People are talking. They’re having a chat. It’s like the corner of — it’s like a sports bar. People get together and they talk about things. And, yeah, some of them are — some misinformation happens. But as a whole, the community shakes things out. This guy, who wrote the one diary, which is now infamous, right?

Moulitsas: Eventually he took it down. Because enough people at Daily Kos pointed out the flaws in the argument. And so the community was self-policing and finally realized, okay, this was a dead end. Now, of course, there was a lot of irregularities about that pregnancy that still are pretty much unexplained. I don’t think they’re explained by the original theory. But there’s some weird stuff. I mean, you don’t have your water break and then you wait ten hours to go the hospital. Because you give a speech and you go on a commercial flight to Seattle, and sit around, and take a commercial flight to Anchorage, and take a one hour drive to your hometown, and then have a baby when your water breaks. Especially a special needs child. Like Trig was. But that said, it’s her choice to make those decisions. You know, I’m a progressive. I’m assuming a doctor said it was okay for her to do that. You know, it’s between her and her doctor.

I am not Sarah Palin. I’m not trying to inject my morality into the public space. But there are some weird things that led people to ask questions. I think that’s perfectly natural. And they led to the reality that Bristol was pregnant. Which normally wouldn’t be relevant. Except that her mother (1) is a fierce opponent of sex education, is all about abstinence-only, and (2) she vetoed funding for a halfway home for pregnant teenagers. Right? So it actually matters when you legislate morality how that will affect your family life. I mean, the hypocrisy and everything else that’s attached to it.

Now that said, there’s also a great deal of investigative stuff that came out of Daily Kos that is now part and parcel of the confirmed background of Sarah Palin. Like her association with the Alaska Independence Party. The separatists.

Correspondent: Sure. But I’m talking about this misinformation here. I mean…

Moulitsas: No, no, no. Good. I want people to look at media with a skeptical eye. Are you kidding me? If people did that, would we have rushed to war in Iraq so quickly? If people didn’t just blindly trust Judith Miller in the New York Times reporting?

Correspondent: Even at the expense of your own credibility?

Correspondent: But the fact of the matter is that “dailykos.com” is in the link.

* Note: The specific report that Moulitsas may be referring to is this 2003 PIPA study which pointed out that FOX News watchers more most misperceptions than those who watched other networks. But there is a significant difference between FOX News watchers experiencing misperceptions and Moulitsas claiming that this audience is “the most reliable Republican constituency in the Republican party.” [sic]