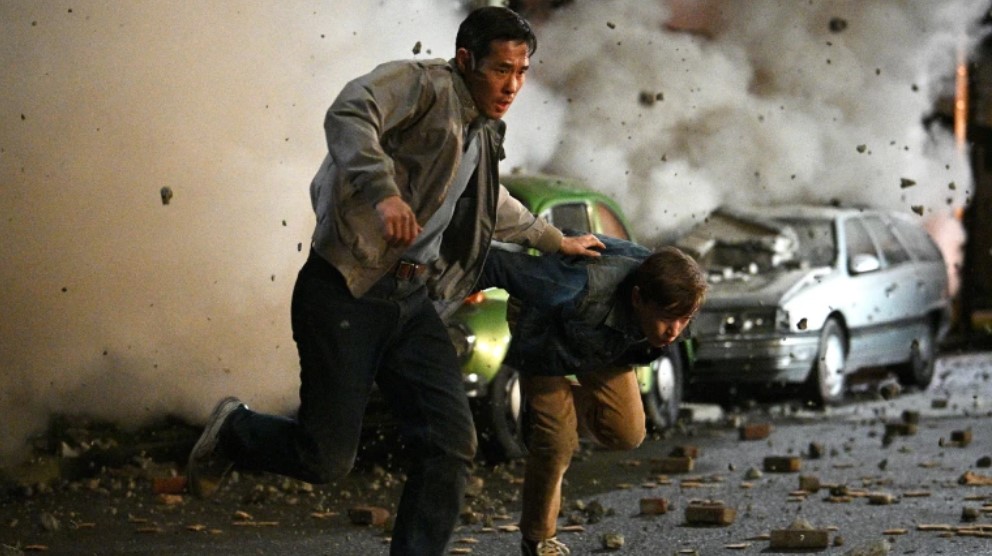 The “continuation” of Quantum Leap is one of the worst reboots I’ve seen in years. It is a cash grab completely bereft of the inventiveness and imagination that made the original series so distinct.

I absolutely adored the original Quantum Leap series. It was quirky, imaginative, emotionally honest, and breathtakingly original. It was buoyed by the considerable talents and charisma of its two leads: Scott Bakula, who played the time-traveling scientist Dr. Sam Beckett, and the late Dean Stockwell, who appeared as Al, Sam’s cigar-smoking holographic guide, and who regularly wore flashy and often hilarious suits that seemed to be designed by some insane tailor obsessed with clashing pastels. The original series had the guts to tackle social issues with emotional sensitivity, such as the audacious episode in which Dr. Sam Beckett leaped into a rape victim. It had the confidence to tinker with daring premises, such as Sam leaping into a chimpanzee in the early days of the space program. And this go-for-broke high-concept approach made Quantum Leap one of the most fascinating shows on television in the 1990s. It greatly helped that showrunner Donald Bellasario was smart enough to hire top-notch writers. And because Sam could leap into anyone, the show was essentially an all-genre production in a way that hasn’t quite been seen since — unless you count such amazing shows as Farscape and Fringe. Quantum Leap could be a goofball comedy one week or a trenchant drama the next. It was also not afraid to embrace juicy melodrama, such as the very fun Evil Leapers who were introduced in the fifth season. Above all, the original series had heart and passion and guts. And this is arguably why the series remains so well-loved today.

But now NBC, fueled by corporate greed and knowing full well that fans are easily manipulated and will bob their heads up and down over the most mediocre storytelling, has “continued” this series and completely destroyed what was once a must-watch show. The first episode is poorly written garbage made by vile mercenary hacks who have clearly not studied what made the original series so enjoyable and who have neither the talent nor the inclination to carry on with the inventive tradition. I mean, when Bakula himself has completely distanced himself from this series in the classiest way imaginable, you know that the producers of this hideous affair shit the bed and then some. Bakula, so integral to the series, dodged a bullet. I hope he sticks to his guns and isn’t involved at all with this amateurish and shoddy production.

In Dr. Sam Beckett’s place, we have a dull and manipulative clod by the name of Dr. Ben Song, played by Raymond Lee. While it’s great to see an Asian American actor as the leading man in a television series, Lee, to put it charitably, is a hopeless stiff. An actor who clearly doesn’t have the thespic range of John Cho, Steven Yuen, or Sandra Oh — all of whom would have been perfect as the lead here. He appears to be deeply uncomfortable in the role. And his character is established in the first episode as a man who betrayed his partner, Addison (played by Caitlin Bassett), by injecting some new code into the supercomputer Ziggy and leaping, leaving only a thoughtless video message for her. To add insult to injury, Addison has now taken the place of Al as the holographic guide. So that means Addison now has to watch her fiancé regularly get it on with people in the bodies he leaps into. And if the show is committed in any way to the original concept of “putting right what once went wrong,” then it has established a morally bankrupt and incredibly selfish man in Sam’s place. The original series had the good sense to leave Sam’s wife out of the picture. Since the paper-thin Addison doesn’t possess the temperament of a cuckquean, it’s doubtful that she wants to see her partner fuck other people in her presence. So in an attempt at gender parity, the showrunners have succeeded instead in creating a misogynistic scenario in which Addison is more in the role of victim rather than guide. And given how Quantum Leap lives or dies on this vital character dynamic, the new series has already painted itself into a disastrous corner. It certainly doesn’t help that Sam’s “Oh boy!” has been replaced with Ben’s “Oh shit!” Perhaps this is a subconscious act from the producers in which they are offering a honest assessment of the new show’s true worth.

The new series also spends far too much time in the present day Quantum Leap Project, assembling a cast of tepid characters which include a nonbinary “architect” named Ian Wright (played by Mason Alexander Park with high camp) and Ernie Hudson reprising his role from “The Leap Home (Part 2)” as Herbert “Magic” Williams. Hudson, at least, has some fun with his role with big chewy lunges. He probably would have made a more interesting holographic guide than Addison. But Mason Alexander Park, because of the piss-poor writing, is reduced to yelling at DJs to play insipid song choices (“Come Dancing” instead of “Dead End Street”? Really?) and looking more like a thoughtless nonbinary caricature rather than an interesting three-dimensional character. Rather than keep the Quantum Leap Project secret, as the original series did, the mystery of the program is now needlessly revealed. And given how bereft of imagination this “continuation” is, the show’s producers have killed all the wonder that kept us rapturously watching three decades before. By keeping the show’s focus primarily on Sam, we were able to get to know him over time. And it also naturally guided the writers to mine the personal histories of their two central characters — often with emotionally moving results. (Who can forget the heartbreaking moment in “The Leap Home” when Sam sings “Imagine” to his sister when he leaps into himself and she knows, upon recognition of John Lennon’s telltale style, that he has to be from the future?) But because the new series now splits the story between Ben’s journey and the present day environment, we have less screen time with Ben. And with writing that is decidedly much inferior to the original series, the show is a veritable snoozefest and an insult to audience intelligence.

The other main problem is that, because a leaper can only travel within his own lifetime, Ben’s time range isn’t nearly as interesting as Sam’s. While Sam could inhabit the 1950s, the 1960s, and the 1970s, Ben can only go back to the 1980s at the earliest. And given the jejune and witless writing that now drives this colossal disaster, I doubt very highly that the writers will investigate, say, the collapse of the Soviet Union or the fall of the Berlin Wall. Their commitment to history is cheap nostalgia, seen in such obvious song choices as David Bowie and a-ha and memorialized further with a double bill of The Goonies and St. Elmo’s Fire seen on a movie theatre marquee.

The original series also had a sense of humor. I mean, the producers had to be funny given how goofy the conceptual hook was. But this new show is completely devoid of humor. In the original series, Al’s handlink had a number of weird squeaks and wheezes attached to it. And this brought a peculiar atmosphere to the series. But Addison’s tool is a generic circular device that can display holographic data in which there is no real commitment to sound design.

Change, of course, is inevitable. And reboots and remakes can work. Before the talentless Chris Chibnall utterly ruined the show, Doctor Who produced some of its best episodes when it returned in 2005. The American iteration of The Office is arguably better than the British original. Or what about Mad Max: Fury Road? Or Ron Moore’s Battlestar Galactica?

But based on a social media search I conducted last night, the fans have gobbled this truly terrible show up without question. And they are aided and abetted by dopes like Primetimer‘s Mark Blankenship, who actually had this to say:

Not every television show has to be an aesthetic breakthrough, because if everything were that compelling, then we’d never get the laundry folded.

This is anti-intellectualism. This is settling for mediocrity. Television, at its best, is art. And art has the duty to grab you by the lapels and not let go. Television isn’t something that should drone on in the background to alleviate lonely domestic duties. It should be about something.

And Quantum Leap isn’t about anything other than the need to fill up plutocratic coffers.

Fan entitlement now means accepting corporate “entertainment” without intelligence, craft, or wit and proclaiming this as “great” simply because you have some dim memory of the original series being great. It now involves surrendering your capacity to feel or to practice critical thinking. It involves possessing a Borg-like mind and becoming some slavish lemming to a corporate empire that does not give two fucks about quality storytelling and wants to take as much time and money from you as it can.

What NBC has done here is a shameful calumny. By employing talentless mercenaries as writers and producers, it has committed a significant crime against True Art. (And I am willing to hold up several episodes of the original series as True Art — indeed, Quantum Leap was some of the best television in the 1990s.) The Peacock has taken all that was great about Quantum Leap and created a steaming pile of insipid shit that is the greatest possible insult to originality. And because most people’s standards have plummeted, Quantum Leap will undoubtedly be a huge hit, perhaps expanding and becoming as smug and as bloviated and as vapid as the Marvel Cinematic Universe.