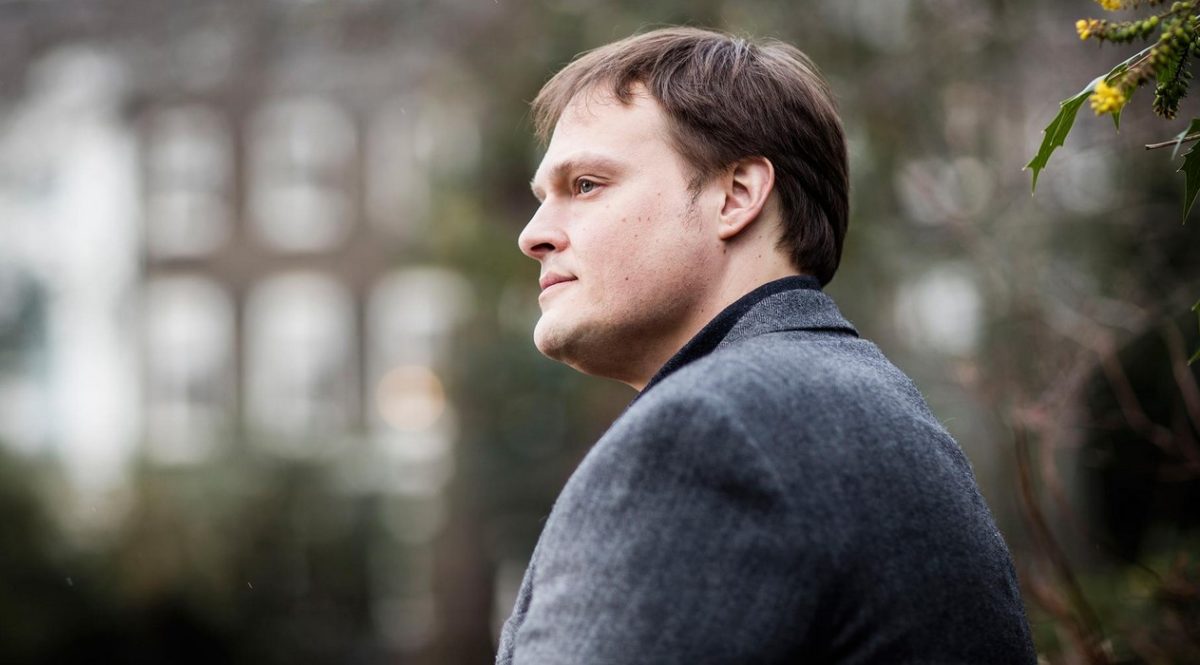 Garth Greenwell’s mediocrity sets me off like a bull running loose in the streets of Pampolona. This “sentence master” is a fraud. Here are several reasons why.

There are awful writers out there who you can ignore or forgive. Because you can at least detect a whiff of growth with each new volume. And honestly who wants to be the guy stifling an artist’s evolution?

But every so often, you have the misfortune of reading the other type of awful writer. The awful writer whose rhythm is so off and whose observational approach is so obtuse and obvious and condescending that his work just fills you with rage. This type of awful writer is often anointed with undeserved literary royalty when the work itself offers little more than platitudes. He becomes so puffed up with vanity and certainty because today’s literary outlets are little more than fawning promotional hubs rather than thoughtful and genuinely useful venues for critical discussion. The awful writer believes his own press. And he gives the public more of the same. And the public, easily manipulated by savvy publicists and locked in the Ouroboros of social media groupthink, comes to believe that there’s something to the mediocrity.

What triggers me about Garth Greenwell is not his colonial attitude towards eastern european countries and bodies, but how he dismisses socialist architecture, while celebrating 19th century tenements and feudal castles that are more in line with his middle class sensibilities

Garth Greenwell is a writer I despise with the same venom that I apply to anyone who stands in the way of universal healthcare and solving income inequality. He is the Pete Buttigieg of literature: a smug huckster who seems so certain that he knows the world when he really doesn’t know much at all and will never be honest about his ignorance, a younger man inexplicably adopting the windbag cadences of a calcified septuagenarian. Like Buttigieg, Greenwell is a pretentious and out-of-touch bore who flexes his alleged erudition not from a place of genuine passion and curiosity and interest in people, but much like a Bernese Mountain Dog performing a spinning trick before a paying crowd. Step right up! Look at the man’s sentences! Pay no attention to that ungainly clause between the commas! Greenwell has been given a free ride by the literary establishment, largely because there is presently a vacuum for the type of culture-fueled gay literature that has been long practiced by the likes of Edmund White. Certainly we need more of this type of writing. But it needs to be good writing. And Greenwell ain’t it. He isn’t an Ed White. He’s certainly not a James Baldwin or a Christopher Isherwood or a Shyam Selvadurai. And he sure as hell isn’t a genius like Alan Hollinghurst. (Honestly, if you’re considering reading Greenwell, you’re better off reading everything Hollinghurst has written. That man is a true master of the sentence, not Greenwell.)

Greenwell’s overwritten and often unintentionally hilarious prose has been mistakenly heralded as top of the line. You have to give the people at FSG this much. They really know how to manipulate today’s literary bobbleheads. I’m likely feeling far more indignation about this than I should. But bad writing sets me off like a hopped up bull running loose in the streets of Pampalona.

Anyway, last week, I had the considerable displeasure of reading Garthwell’s latest volume, Cleanness. I found myself in a state of unceasing disappointment and a book-throwing fury I couldn’t seem to shake over how such literary bullshit got a pass from today’s overworked editors. Here are some examples of Garth Greenwell’s overwritten offenses:

“…as if he were deciding whether or not to pronounce a judgment he was on the point of making.”

If G. is already deciding, there is no need to tell us that he is “on the point of making” a judgment. This would be akin to maybe eating a bagel that I am on the point of chewing.

“I came to the center every morning I could, walking the streets as the city woke up…”

Pick a lane, Greenwell. If you’re walking the streets as the city wakes up, then we already know that it is morning.

“The room was lit by a row of small windows near the top of one wall, their panes clouded and stained with smoke, so that the light was strangely muted, as if steeped in tea.”

Who in the hell edits Greenwell? This is a lot of pretentious huffing and flexing just to impart that smoke-stained windows muted the light in the room. The superfluously precise detail of the “row of small windows near the top of one wall” gets in the way of the tea-steeped light. (I’ll give him some credit for the tea imagery!) William Gibson is better at hyper-specific description because it’s a vital part of his atmosphere. Greenwell, by contrast, reads like some dude tormented by descriptive desperation.

“G. laid his cigarettes on the table and rested the tips of his fingers on the pack, tapping it lightly.”

In an attempt to be clever and “literary,” Greenwell uses G.’s fingers as a metaphorical parallel to the cigarettes. But this sentence is a failure for its length and risibility. The image of a smoker tapping a pack of cigarettes with his fingers for five minutes like the late Neil Peart doing a drum solo is an unintentionally hilarious one.

“My satisfaction only deepened when G. continued, after our coffee arrived and we took a moment to add sugar and milk.”

I looked into his eyes, after I patted my left jeans pocket, my hand placed perpendicularly to my thigh, and felt around for my keys, which were shiny and jangling and nestled like a pig in a blanket. Come on. You obviously don’t care about my keys. You care about me looking into my lover’s eyes. But then this is the Greenwell formula: imply “literary” import by stretching a sentence beyond its natural limits. Honestly, who gives a toss about the sugar and milk? How is this important to the story? We’ve already established the rituals in this restaurant. This badly written bullshit gets me fuming.

“He didn’t look at me as he said this, looking instead at his hands, both of which were on the table in front of him and in one of which a cigarette had shrunk almost to a nub between two fingers.”

This is a lot of hot air just to get to the cigarette nub. We don’t need to know that the table is in front of him. Where the fuck else would the table be? Behind him? I mean, if Greenwell wants to chronicle an unusual Bulgarian practice of sitting in restaurants and reaching behind one’s back to eat your meal, then, dammit, I’m all ears. In fact, a goofy story along those lines would be far more interesting than anything Greenwell has ever written.

“I put both of my hands around the cup in front of me, taking a deep breath as I pressed my palms against what warmth was left, and then, when I could speak more calmly, What is the life you want, I asked.”

I must confess that this sentence made me laugh out loud. It reveals what a humorless dolt Greenwell is. It shows us how a badly written sentence — and, let’s face it, there isn’t a page in Cleanness that isn’t littered with these runts — can completely botch your efforts to establish atmosphere. The belabored attempt at sensual intimacy, followed by the superficial question, is unsuccessful because of the preposterous behavioral explanation. Greenwell might have had me if he had stuck with the hands around the cup. But he’s such a literary control freak that he has to tell us why the narrator does this. And when he does, we have to take a deep breath and say to ourselves, “Oh, Greenwell, you hopeless Harvard gasbag. You really don’t know people as well as you think you do.”

“He hunched his shoulders a little, as if to say I don’t know or maybe what does it matter, and then he started talking about something else, or what seemed like something else, making me feel again that I was on the wrong tack, that I had failed to sense or say what I should.”

More overwritten malarkey! Greenwell asphyxiates his readers with these superficial explanations of what behavior — in this case, G. hunching his shoulders — may mean as opposed to suggesting what it can mean and how these two characters perceive it. Good fiction requires ambiguity and speculation about characters. And we’re clearly not getting that here. Greenwell also commits the cardinal sin of explicitly telling us how the narrator feels rather than permitting his gestures to suggest feeling. For all of his syntactic engineering, Greenwell fails to understand that a good sentence needs to advance the story and our knowledge of the characters. The rhythm here is off, complete with the “something else” jumble that is completely superfluous and appears to exist here to pad out the page count. (Cleanness is 240 pages and the text has been typeset so that you get about thirty lines per page with notably larger page margins.)

“It was a tender gesture, and his voice was tender too as he said Kuchko, addressing me as if solicitously and tilting my head so that we gazed at each other face to face; his fingers flexed against my cheek, almost in a caress.”

Greenwell has been celebrated for his frank portrayals of intimacy. And while I’m happy to see more LGBTQ and BDSM relationships in mainstream literature, I cannot accept bullshit sentences. If you have tilted your lover’s head and you are gazing at each other, you are face to face. What other position would you be in? This takes us back to the eccentric table ritual in Bulgarian restaurants, which has captured my imagination so much that I may very well have to write a story about this myself. Also, why do we need the “as if solicitously” and “almost in a caress”? The adverb stands out like a sore thumb and the imagery here is pulled from the bodice-ripper cliche playbook. Greenwell is near incapable of writing a story without all this unnecessary commentary on what a gesture may mean. I suppose, it’s that privilege and Harvard background that makes this asshat assume that his readers are too impaired to imagine anything.

“I could feel his cock thicken against my cheek, then lengthen and lift: there had been no change in it during my long recitation, that catalog of desires I had named, but now at our first real touch he grew hard.”

If this sentence isn’t a finalist for the Bad Sex in Fiction Award, I’ll be very surprised. This reads more like a description of Puppetry of the Penis than a love scene. And Greenwell’s verbosity, his compulsion to insert needless clauses, his catalog of desires (nay! his catalog of desires that he has written!), really destroys his good faith efforts to describe intimacy. But he certainly has a strong future ahead with these unpardonably flatulent sentences!

[CORRECTION: A previous version of this essay mistakenly referred to a “Burnese Mountain Dog” as a “Burmese Mountain Dog.” Reluctant Habits is grateful to reader George Jansen for pointing out this error.]