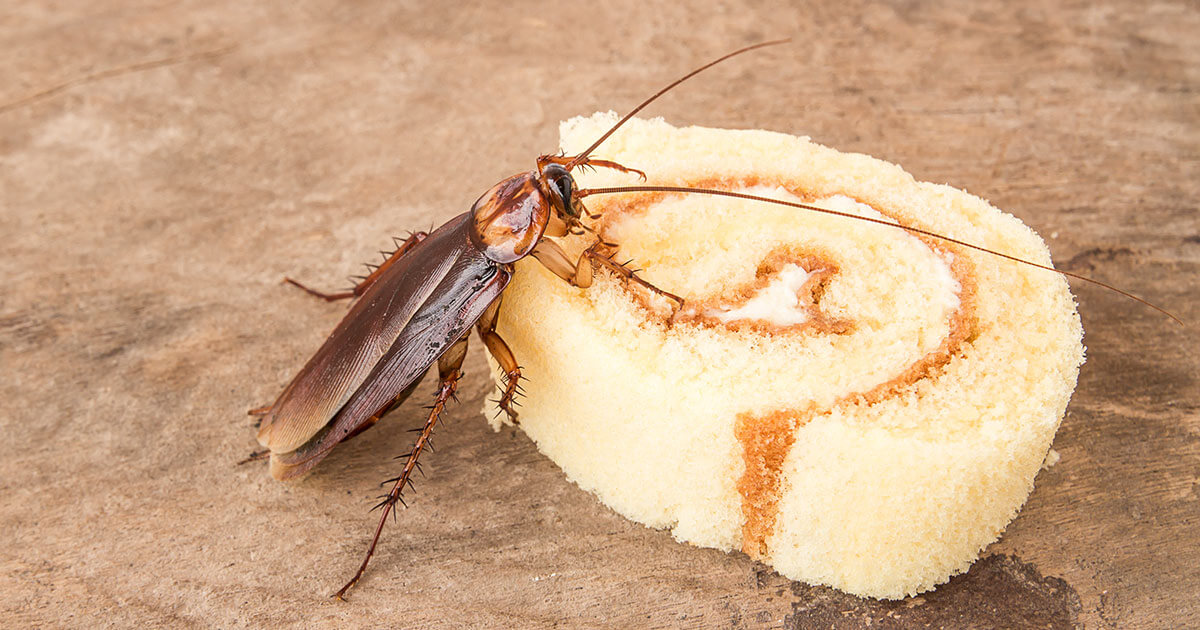 In this seventeenth NaNoWriMo installment, a man who has deluded himself into believing that he the most brilliant mind on the planet writes his final Substack column.

Brad Carmody (1977-2027) was a lot of formers. He was a former reporter at Advertising Age, a former editor at Medium, a former senior writer at Wired, and a former regular contributor to Vox before starting this Substack newsletter in desperation after he experienced great difficulties landing work as a freelance writer. Yes, it’s true that Brad was difficult at times and felt the need to obsess a little too much over other media figures on social media, but he was one of the most vital conservative voices in American letters. Nobody knew if he was on track to becoming the next William Buckley or the next Alex Jones, but his vitriolic columns were always must-reads. He was often angry, but in the right way. On the rare occasions when he calmed himself down, he was an accomplished blueberry waffle king in the kitchen. Say what you like about Brad (and many of the people he publicly attacked will certainly have their opinions), but he really knew how to use a waffle maker! So this is a huge and deeply tragic loss — not just for Brad’s family, but also for men with middling breakfast-making skills.

His widow graciously permitted us to publish this final essay from Brad. It was found on the tablet next to his dead body. Please consider contributing to the Brad Carmody GoFundMe, as the Carmody family experienced great financial difficulties in Brad’s final years due to his regrettable OnlyFans addiction — particularly his fixation on Ezmerelda Gibbons.

In addition to his wife and his fifteen-year-old juvenile delinquent son, Brad is survived by his brother, Killian, who is now the proud manager of a Burger King in Erie, Pennsylvania, finding a new life after experiencing an unfortunate mental collapse because he couldn’t finish his dissertation on narrative tropes in the Marvel Cinematic Universe. We offer our thoughts and prayers.

And, remember, if you are experiencing suicidal thoughts, please call the 988 suicide and crisis lifeline. You are loved by more people than you know!

The Scandal of Unfettered Speech
by Brad Carmody
The JCPenney Chronicles, October 17, 2027

Last May, noted intellectual Martin Slabak appeared at the 92nd Street Y and used a term so infamous that it caused members of the audience to walk out “in a state of fear.” The word he used was “stupid.”

Now the origin of “stupid” goes back to the 1540s. It comes from the Latin stupidus, meaning “amazed, confused; dull, foolish.” It literally translates into “struck senseless.” From there, the French picked it up and all the other Indo-European languages followed. As any sensible person knows, “stupid” has had a long and glorious run.

On stage, Slabak called his ex-wife Emma Silverburg “stupid.” He called Senator Rob Rollins “stupid.” He was even courageous enough to call himself “stupid” for fathering two children with a stupid woman. And he condemned the epidemic of stupidity that has, even as I write these words, become so ubiquitous in our culture that numerous people are now openly copulating in public places and our now unregulated airwaves prominently feature once thoughtful anchors engaging in variations of “The Aristocrats” routine on-air.

But now the word is apparently offensive. And at a McNally Jackson appearance just a few weeks later, a group called Intellectuals Raise A Tedious Egofest (“IRATE” for short) disrupted a party for the latest issue of x+1 by pelting Slabak with dozens of eggs (which, given inflation, surely cost them a fortune) and told Slabak that he was the one who was insensitive.

I think we can all agree that IRATE is a domestic terrorism group — no different from the epidemic of ugly, childless, and unmarried cat ladies who continue to vote Democrat after getting their monthly payments from George Soros. It’s on the same level of al Qaeda, but with a different list of moral objections. IRATE represents the same unattractive mix of quavering personal sensitivity and totalitarian demands for ideological conformity.

As the most brilliant man on this planet, I’ve had my own unpleasant dust-ups with these unruly socialists. A professor at George Washington University once called me a “cockroach” after I flew to Greenland on my own dime to see if climate change was, in fact, a real thing. During a fierce rainstorm in Tasiilaq, where I had to buy boots and a poncho at the last minute, I still stuck to my guns and insisted, even as the town was five feet underwater, that climate change was one of those crazy liberal conspiracies. I put myself out there. And, for this, I was called a “cockroach.”

So I telephoned this professor and screamed at him for ten minutes. And this professor, who actually believes that critical race theory should be taught in classrooms, wasn’t man enough to shout back at me! Can you believe that this Marxist son of a bitch, this deplorable metrosexual who believes that it’s just peachy keen for men to get pedicures and for children to change their pronouns, never once raised his voice? I called him “stupid, oh so fucking stupid,” slammed down the phone, and proceeded to binge-eat a large box of White Castle sliders that my wife had the foresight to pick up for those occasions in which I get very angry reading things online.

I’m feeling nostalgic for the old days in which you could use the word “stupid.” Personally, I blame uppity women for this new age of hypersensitivity. We rightfully took away their reproductive rights and cited 17th century legal precedents to put them in their place. And they still called us stupid. We helpfully informed women with PhDs in English Literature that Virginia Woolf was the author of Mrs. Dalloway and they called us mansplainers!

I’m misting up right now remembering the good old days when your wife would make you a sandwich and never speak up while you watched a football game. You could slap your wife on the ass like James Bond and tell her to go away when a friend showed up for a “man talk” session. 1964, which was before my time, was the last time in American history in which you could be a real man and call people stupid. And if I lived back then, I’d probably get more action in the bedroom instead of the yearly ten minute ceremony my wife and I perform on our wedding anniversary.

But there was a time, a brief time sometime around the early 21st century, when you could still call people “stupid” on the old social media platform Twitter. You could even tell anyone who was smarter than you to fuck off forever. While it lasted, Twitter was a sewer. It brought out the worst in humanity. I again sincerely apologize for any part I played it making it worse, although I greatly enjoyed hurting people and allowing my unmedicated indignation to fly its freak flag.

But now we can’t call people “stupid” anymore. And if we can’t do that, then I have no real reason to live.

So this is my final Substack column. I want to thank everyone who has encouraged me to own the libs over the years. We came very close to overthrowing the capital on January 6th, but, in the end, the Democrats continued to steal all the elections. And now the burden of being me is simply too much to bear. There’s no place for me in the zeitgeist anymore. And I’ve grown tired of busting out the Adorime pump from the closet two times a day.

And while I may not have the will to live, you do, my fellow patriots! There is a place for you out there, somewhere, where you can be truly free! You can still buy guns and walk around states with open-carry laws. You can still invite that annoying neighbor onto your property, shoot him in the head, and hire a good defense attorney to uphold the castle doctrine. You can still count on a Supreme Court — even with two of the Justices recently assassinated — that will uphold the old ways. The only ways.

Brad Carmody, not a cockroach, logging off.

(Next: The Dark Soul)

This chapter is dedicated to noted media asshole Tim Carmody, who fucked around and found out. (The coward even deleted the below tweet. I’m not on Twitter anymore and am quite delighted to see that toxic site bite the dust under Elon Musk’s disastrous watch, but a friend had forwarded this to me.) 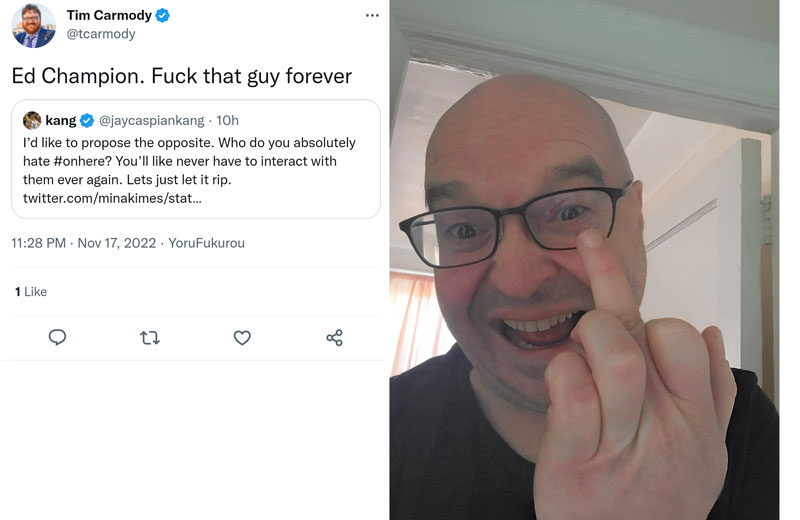