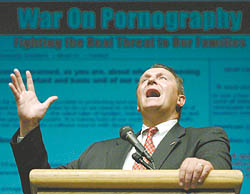 Utah Attorney General Mark Shurtleff has declared a War on Pornography. At the exact moment of declaration, Shurtleff’s right hand froze permanently into an upward Ur-Seig Heil position, so as to prevent any conflict of interest with his lower anatomy. His subscription to Hustler was cancelled and the State of Utah will be very careful about the motels Mr. Shurtleff stays in. Aggravating matters was Mr. Shurtleff’s mouth, now permanently locked into a rictus. Ms. Shurtleff’s assistants plan to feed him bottles of Gerber while the proud general conducts his war against the most American of trades. (via MeFi)