Here’s how The Literary Encyclopedia’s entry on Tom McHale begins:

In the 1970s, Tom McHale established himself as one of the most promising American novelists of his generation. In a little more than a decade, he produced more than a half-dozen novels that were widely reviewed. Most of those reviews were enthusiastically–sometimes wildly–positive. But even those reviewers who were more guarded in their responses to the individual novels acknowledged the originality of McHale’s darkly comic vision, the engaging energy of his style, and the evidence of a considerable talent in the growing body of his work. Reviewers compared his novels to those of Joseph Heller, Kurt Vonnegut, Jr., John Updike, Philip Roth, and Bruce Jay Friedman. In 1972, McHale’s second novel, Farragan’s Retreat was named a finalist for the National Book Award, and two years later McHale was the recipient of a Guggenheim Fellowship for Fiction. A New York Times article on the current literary scene placed McHale with Don DeLillo in the vanguard of those novelists who were most influential in terms of the directions that the American novel would take in the 1980s.

I always want to remember Tom McHale as that dashing young guy on the back cover of my much thumbed-through Literary Guild hardcover copy of his second novel Farragan’s Retreat, the one I first read when I was still a teenager. I was blown away by the black humor and Tom’s elegant style. 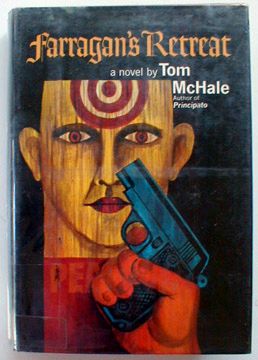 Here’s how the Time Magazine review from March 1, 1971 begins:

The old motto, “Power perfected becomes grace,” could have been invented to describe Tom McHale’s novels about Irish and Italian Catholics in America. Humor is his forte—not satire but farce. No aberration is too grotesque to be included, no character too minor to be lampooned. McHale’s comedy waves over chaos like luxuriant grass over a grave.

There are many young writers with healthy reserves of rage and chaos, some indeed with little else. What distinguishes McHale is not only the fertility of his invention but the humanity—remarkable in a writer of 28—that penetrates even his crudest caricatures.

After I finished Farragan’s Retreat, I went to the library to find Tom’s first novel, Principato. (Thanks to Matt St. Amand for the review. Matt knows Tom’s work better than just about anyone.) I loved it as well.

Then I read Farragan’s Retreat again. I copied out passages. In the first story I ever wrote for my MFA program, I stole Tom’s description of “the hilltop hulk of the art museum along the Schuykill” for a section where my protagonist, a Penn student, takes her morning jog. (People “jogged” in the 70s.)

Later I’d meet Tom McHale at The Book Group of South Florida, founded in the early 1980s in what was then something of a literary wasteland. I can recall how astonished Tom was when we first met and I could quote his work back to him. I suppose he hadn’t recently encountered people who knew his work.

The last job Tom had before he died was was night assistant at the $1.50 Holiday movie theater in North Miami Beach. He got fired for absenteeism; Tom drank a lot at the end, maybe for years. It never occurred to me that he was an alcoholic, but then I’ve never had a drink im my life and am bad at recognizing drunks.

On Matt St. Amand’s website, he quotes from a rather inartful and self-serving letter from me:

Do you know that after he committed suicide in his sister’s garage about two miles from where I am sitting, I was asked to speak at his memorial service because, the person said, “You were his best friend, weren’t you?” when in reality, I was just an acquaintance of Tom. It was so sad. Tom and I met, I guess around 1981, as part of the Book Group of South Florida. Most of the people there were old ladies who’d been in publishing. Tom was amazed I’d read all his books and could quote lines from Farragan’s Retreat. He’d had a really rough time of it by that time, and he finally had another book coming out. I remember his publication party at the tony Bay Harbor Islands. I always feel uncomfortable at these things, and it was clear to me that most of these people were just society types or people on the make who had no idea who Tom was or his place in American literature. I left early, stopped off for a couple of errands, and then went to a Burger King to get a Whopper. I was shocked to see Tom sitting there alone, just after he’d been the guest of honor at his publication party. I guess at that moment I sensed how lonely he was, and I sat with him, and I guess it was really the only time I really talked to him, and even then, he was pretty stoic and reticent.

He got a horrible review from Ivan Gold, who’d had his own problems with writer’s block and alcohol, in the Sunday NY Times Book Review, and I know that depressed him. But I don’t know what caused him to take his life. His very Catholic family (siblings) were, I suspect, always somewhat uncomfortable with Tom. I never talked to his sister. The newspapers asked me for comments about his death, and I said stupid things. A year later, I had a book reviewed in the NY Times Book Review, also by Ivan Gold, and it was a mostly nice review, but the niceness was spoiled by how Gold’s review had hurt Tom.

We never did have a Book Group memorial service. Tom was 40 when he died, in the garage of his sister’s house in Pembroke Pines. 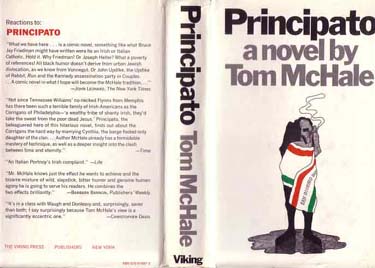 Here’s how “Portrait of a Writer as a Young Suicide,” a July 4, 1982 Miami Herald article by Cathy Lynn Grossman ends:

Nedda Anders, founder and president of the Book Group and editor-publisher of Andiron Press Inc. in Tamarac, introduced the subject of McHale:

It was the group’s regular meeting, complete with sandwiches from the deli. They sat on plastic chairs at fake wood tables in the Community Room of a pillbox branch bank building dropped incongruously into the scrub brush along University Drive in Lauderhill. All that could be seen from the windows were cars shimmering in the heat, transplanted trees and transient commerce.

They passed around a copy of the paragraph in Time magazine, mentioning the death of the author “by his own hand” and a short obituary from a newspaper. Everyone said,”tsk-tsk.”

Everyone: A retiree who has established himself in Hollywood as a literary consultant. Some delicate older women writing articles for magazines or the story of Davie. A librarian. Several one-person publishing companies producing books on health, astronomy or local memoirs and history. A short-story writer, Richard Grayson, who succeeded the late McHale as the most famous member of the group, which was then planning a party for Grayson’s second book, Lincoln’s Doctor’s Dog.

People each said how they met McHale, how little they knew him, adding the few facts they had.

“There seemed to be no barriers in Tom,” Anders said. “He was crisp and charming. … We are trying to cope.”

Literary agent Myra Gross remembered that he had landed “a real plum” of a teaching job for next September at the University of Pennsylvania.

Anders interrupted, saying, “He seemed so perfectly equal to life, so absolutely rational. It’s hard to think that somewhere in him was hidden something irrational. … Myra’s son used to call him a ‘cool guy.’ ”

During lunch they talked about Mchale’s funny books on guilt, his angry, anti-religious attitudes and the irony of his Catholic funeral in a faith that denies its rituals to suicides.

“It is so terribly difficult to know what drives people, especially writers,” said the author of romances.

“Gee, I wish he’d talked to me,” said the retired consultant.

“His books were getting increasingly less attention,” Grayson said. “Ten years ago you could write literary books and make money. Not now.

“After Tom’s publication party, when I was driving home, I said that I felt luckier than Tom. I know nothing is going to happen with my book. My book is going to sell 20 or 50 copies, and I accept that.”

They talked about art and the bottom line and youth today. They speculated on whether McHale had a contract for a seventh book. Someone said yes.

“It is awful to have this be reduced to gossip,” she said.

Later, Myra Gross recalled quiet times with McHale, funny stories he told while monopolizing the conversation. She didn’t mind. A single woman, a working mother, a writer, she knows something of what McHale faced — something about being alone and afraid, about art and rent. Here in these same suburbs she lives on as best she can.

“Maybe I’m more practical,” she says. “Maybe I learned to compromise along the way.”