[EDITOR’S NOTE: The great Jimmy Beck, a fantastic literary enthusiast who has made guest appearances at The Old Hag and Maud Newton, has offered the first in what I hope will be a semi-regular series that I’ve tentatively entitled “TOP JIMMY,” whereby the great Beck observes literary figures at bookstores and readings, and weighs in. His first subject is Gore Vidal.]

BECK: If you were to read a transcript of Gore Vidal?s remarks at the Regulator Bookshop in Durham, NC on Friday afternoon and use this alone as the basis for your impression, you?d probably come away thinking, ?Jeez, what a grumpy old bastard.? And sure, Vidal is full of bile and righteous indignation about the Bush administration. 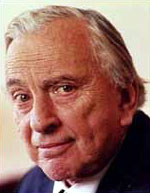 But he?s also a lively conversationalist and a true raconteur. His comments were leavened with humor: ?These guys [Bush and Cheney] have turned me into creationists?Darwin was wrong!? And of course, it?s hard to imagine anyone else who knows so much about US history. His faculties remain undiminished by the fact he?ll turn 80 this year or that he now walks haltingly with the aid of a cane (he recently had knee surgery). He speaks in a deep baritone and, while regaling the packed house with his inexhaustible supply of anecdotes, treated us to spot-on imitations of JFK, Eleanor Roosevelt, FDR, Orson Welles and W (natch).

Not surprisingly, most of his remarks — and the questions directed at him — were political in nature. The sympathetic lefty audience looked to him to answer questions along the lines of ?What the hell has happened to us as a nation over the last few years?? — a subject Vidal was happy to expound upon at length.

He was in town to assist with a revival of his play, The March to the Sea, a Civil War drama being performed at Duke University (that?s ?DuPont? for all you Tom Wolfe fans).

On the media:
Having just read the New York Times, Vidal said that Paul Krugman was the only reason to even pick up the paper anymore. ?The media is totally corrupt from top to bottom and paid for by the same interests that bought and paid for this administration.?

On Iraq:
?[The administration] seems to feel [it?s] watching a bad movie or a video game. Something?s gone wrong in the American psyche.?

On funny business during the US election:
?[Rep. John] Conyers [D-MI] went to Ohio during the election and has got a lot of material, but we may not get to hear about it. Silence at Appomattox, as it were.?

On Freedom and Democracy:
?We had freedom once, but never democracy. But if you go to an airport today, you know you?re not terribly free.?

On why we vote against our own self-interests:
?That?s the American way.? He went on to blame the media, saying that if a lie gets repeated often enough people will believe it. Here?s where he invoked Welles and War of the Worlds. ?I asked [Welles] once if he realized the ramifications of what he was doing [by broadcasting a fictional invasion from Mars]?? Welles said, ?No I didn?t. I didn?t realize people were that crazy.??

On the prospect of another constitutional convention:
The professional liberals (or professional cowards as I call them) worry about what the bad guys will get hold of [if we have another convention]. Well, they?re getting hold of it anyway. Jefferson thought there should be a convention every 30 years. He said, ?You can?t expect a boy to wear a man?s jacket.??

On the US?s role in the world:
?We are part of the concert of nations. We should play the oboe. Or the triangle.?

On the right wing media?s treatment of Hillary Clinton:
?Suddenly she was a lesbian who murdered her male lover [Vince Foster]. If I were writing that script, I would have at least said ?female lover.??

On John Kerry:
Vidal described Kerry in the 1950s as being ?ruthlessly on the make? for Janet Auchincloss, Jackie?s younger half-sister (and a relative of Vidal?s). Vidal said that Kerry wanted nothing more than to become a relation of JFK?s. He then brought up Kerry?s statement that he would have voted for the war even had he known there were no WMDs, which Vidal referred to sarcastically as ?very statesmanlike.?

On prospective leaders for the Democrats to lead them out of the desert:
?I don?t think you can look to individuals.? One notable exception in history: Lincoln.

On Ronald Reagan:
?The most crashing bore. But a very nice man. He always read all of the jokes in Reader?s Digest.?

On reasons for optimism:
?We have a great capacity to change our minds?look at Prohibition. And as we grow more broke, China will outdo us. Once we cease being imperial, we?ll be calling the troops home.?

On the book of his he wishes more people would read:
?Inventing a Nation. It?s Madison, Washington and Jefferson in their own words.?

On the internet and the emergence of blogs:
?The internet gave us Howard Dean. He not only raised money, he fueled people [to become politically active]. At the big march against the war, I spoke to 100,000 people on Hollywood Boulevard. Of course, the L.A. Times called it ?a scanty crowd.??

On television:
?I don?t watch the programming. I just watch the commercials.? He then launched into a perfect infomercial voice. Returning to the subject later: ?We know the attention span has snapped.?

On religion:
He talked about how religion was not much of a force in American life in the 1940s and said that TV evangelists had a lot to do with changing that. Here he did his best 700 Club TV preacher impersonation?priceless. He also called for revocation of religious organizations? tax-exempt status, calling it ?a vast source of revenue.?

On southern cuisine:
?You?ve got the best smoked ham, grits and gravy. I asked for a ham sandwich the other day and you can?t get one?or you get the rubberized kind.? I asked my mother once what the 19th century was like. She said, ?Well, the food was awfully good.??

On what he?s reading now:
?The History of the Peloponnesian War, and again and again, The Federalist Papers.?

On what kind of gay novel he would write today (versus The City and the Pillar in 1948):
?A pretty dour one.? He then said he rejected the terms of the question. ?There?s no such thing as a gay person. There?s only sex, which is a continuum. ?Homosexual? is an adjective to describe actions, not people. Neither Latin nor Greek has a word for it?it?s just sex.?

On reviews:
?I remember the review of my first novel (Williwaw, 1946). It said, ?Mr. Vidal has posed the problem but offers no solution.? Well, [the book] was a tragedy, for God?s sake. What am I supposed to say? That Sophocles wanted me to end it this way??

On the fate of literary fiction:
?Fiction? Well there?s always The Wall Street Journal.? Rimshot. ?Fiction has dropped to where poetry was when I started. I don?t know if the written word can ever come back. I tell ambitious writers to go and read Montaigne.?