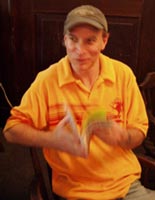 King Wenclas, founder of the Underground Literary Alliance, has finally realized that alienating nearly every member of the literary community hasn’t exactly worked in his favor. Wenclas attended a recent Rick Moody reading with the idea of pantsing Moody as he was signing books. Moody, however, offered Wenclas a a hug instead, causing Wenclas to break down in tears. “A good portion of my life is now gone. I haven’t written anything in years. And nobody loves me anymore.” Fortunately, after enrolling in an affordable evening knitting class, Wenclas has found a new lease on life. “I didn’t realize that one could court controversy while cross-stitching,” said the kinder and gentler Wenclas. Wenclas promptly disbanded the ULA, causing his fellow members to call him a sellout.