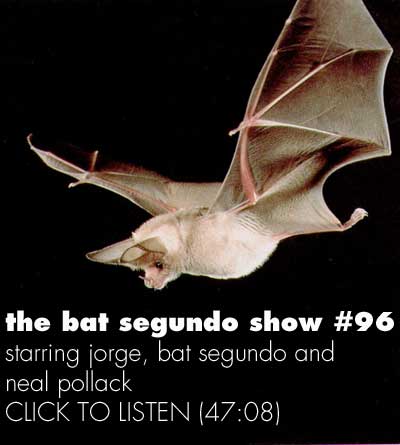 Condition of Mr. Segundo: Contemplating the litigious aspects of fatherhood.

Subjects Discussed: The stigma against father memoirs, the Neal Pollack persona vs. the real Neal Pollack, neighborhood activism, politics, writing a book to “feed my family,” balancing art and commerce, the Chicago theatre scene, on being “family stunty,” responding to Marritt Ingman’s criticisms about failing to acknowledge previous subcultural parenting books, the desuetude of Mr. Mom, the conformist aspects of being an “alternadad,” the mommy wars, how Alternadad “rocks the boat,” the hostile reactions to the Elijah biting essay, the “Shut Up” essay, harsh reactions to Pollack in general, provoking readers, Never Mind the Pollacks, family films, pot vaporizing, the bad breakup with Dave Eggers, on pissing people off, involvement with Cracked, Regina as “straight man,” and sticking with dad writing.

Correspondent: A lot of people have been sort of criticizing this book. I don’t necessarily agree with them, but I think that people are saying…

Pollack: Some people. There’s been positive and negative criticism. You know, this has definitely been the best reviewed book I’ve written. So I mean…so what were you going to posit?

Correspondent: The question is: the nature of commentary. Even in a crude form, does it have any kind of value? It seems to me that the “Shut Up” essay was more of a visceral reaction, but at the same time…

Correspondent: …a lot of people really were upset by it.

Pollack: Yeah, and a lot of people also really liked it. That’s the thing. I’ve always had this uncanny ability. I’ve always had this sort of “love me or hate me” kind of thing going on. Especially with my writing. And again, people were upset by it. But I also had a lot of people telling me they appreciated it. And that’s the same thing with this book. For some reason, even though it’s a pretty simple book about a pretty basic subject, it’s been getting harsh reaction and then a lot of praise too. So again it’s just a sign that I’m doing something right.