November really boils down to one choice: Anybody But Bush. But since we’re in the primary stage, why not have a little bit of fun?

Kucinich doesn’t stand a chance in hell, but he’s got my vote in the primary. Despite what scaredy-cats decry as a wacko platform, Kucinich hasn’t managed his campaign with incompetence. Kucinich has never wavered from his stance. Kucinich has never had to clarify a comment or sleep with the Gore 2000 boys to save his bacon. Because Kucinich has a bigger pair of balls than Dean. He’s against the Patriot Act (unlike Dean). He’s audacious enough to end Star Wars and NAFTA. Kucinich has stayed in the race and remained true to his convictions.

I had problems with Dean’s position on the death penalty and his loose stance on civil liberties, as well as his intricate health care plan (compared to, say, a clear-cut Canadian style one). But I had contemplated voting for Dean because he had what I perceived to be courage. Now it turns out that Dean has been flying by the seat of his pants in nearly every capacity. And that’s no way to run a campaign or a country.

So while I’ll vote Anybody But Bush in November, I’m voting with my conscience in the primary. Do any of you lefties have the balls to do the same?

New York Times: “Tricia Enright, the campaign’s communications director, said Dr. Dean was forming ‘a new creative team’ to overhaul its television advertisements. She said the campaign was not firing its media firm, in which Mr. Trippi is a partner. Many Dean supporters have been critical of the ad campaign, particularly in Iowa. Some questioned the arrangements by which Mr. Trippi forfeited a salary as a campaign manager but collected commissions � said to be as high as 15 percent in some cases � based on advertising buys.

Forget the Iowa yell. The Dean campaign’s financial incompetence stinks of cronyism and irresponsibility. And Trippi’s profiteering comes on the heels of the depleted war chest and Dean telling his 500 staffers to skip their paychecks for two weeks.

I’d say at this point that Dean’s goose was cooked. If Dean can’t manage the finances of his own campaign, then how can he manage the budget? Stacked against Bush’s deficit, Dean certainly comes across as fiscally conservative. 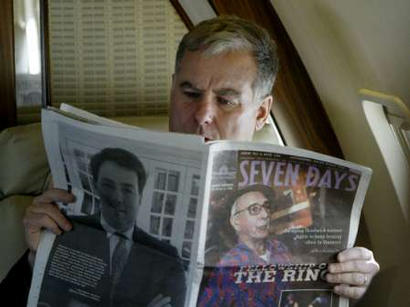 To call Dean’s second place finish in New Hampshire “close” is to approach a cliff face, jump off, and attempt to land on the ground without so much as a bruise. But apparently it’s worse than that. Howard Dean is now down to $5 million. Barring a Missouri win next Tuesday, it looks like we may stuck with Kerry. Unless Dean musters up Robert Kennedy-like support in California and many of the big states, and reenergizes his campaign. Kennedy, however, was more of an idealist than Dean is. And it ain’t exactly 1968.

However, while I woefully miscalculated the percentage points, I was dead-on in my place predictions.

[1/21/06 UPDATE: Apologies for the introspective aside, but I’m truly astonished by the idealism here. Not entirely surprised, mind you, because wildly optimistic notions enter fresh upon my noggin on a daily basis, with several acted upon during any given week. Indeed, I can safely confess that, since I turned thirty, life has been a process of trying to hold onto any and all scraps of hope, bonhomie and idealism, as the wise and sober forces of adulthood demand me to be serious and responsible (I am to a great degree, but I maintain that one can be both!). Granted, there’s still plenty of helium in the Zeppelin, with the only real Hindenburg being my inevitable death, I suppose. But this is what it means to be a committed “optimistic realist” at 31. On one hand, and tying this into Howard Dean, it would be foolish to discount the role of the Internet in disseminating Howard Dean’s Muskie moment. The conservatives guffawed and remixed that twenty second holler and played it over and over and effectively obliterated Dean’s momentum. But let us also consider how refreshingly genuine Dean’s yell was from the stiffs. Here was a man who was ultimately punished for expressing a genuine moment of excitement during the 2004 presidential election. And how much of a telling statment is that of what the United States political process has become? Little wonder that we have no real candidates to choose from anymore. American media, and those who react to it, is particularly unforgiving when it comes to genuine enthusiasm.]

CNN reports the latest CNN/USA Today/Gallup poll shows Kerry ahead with 35%, with Dean following at 23%. If Dean loses Tuesday, it won’t be the first time an eventual front-runner lost both Iowa and New Hampshire. Here are the results for the 1992 New Hampshire primary:

The precentages look familiar, don’t they?

But if Dean starts losing beyond this, then he’s in real trouble.

The New Yorker on Howard Dean: “Last summer, Joe Trippi told U.S. News & World Report that he had given Dean a curious piece of advice: ‘I tell him the only way he can win is to believe in his heart he cannot win. We?ve got to act like we have nothing to lose.’ That, as they say, was then. When I asked Dean, in mid-October, whether he still subscribed to the Trippi wisdom, he replied, ‘In part. I think the problem with the Democratic Party in general is that they?ve been so afraid to lose they?re willing to say whatever it takes it to win. And once you?re willing to say whatever it takes to win, you lose?because the American people are much smarter than folks in Washington think they are. Do I still believe it? I think you have to be ready to move forward and not just try to hold on to what you?ve got. I truly believe that if you?re not moving forward you?re moving backwards in life. There?s no such thing as neutral.'”