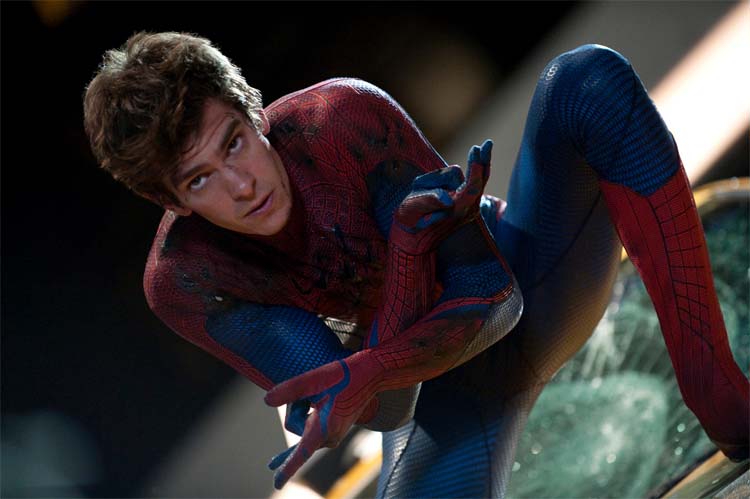 I put forth the modest proposition that a movie containing this much paralogia should be rejected by a mass audience. Why the new Spider-Man movie is a drag.

The Amazing Spider-Man, a completely unnecessary reboot of a perfectly wonderful Sam Raimi movie that was released only ten years before, expects us to believe in remarkably unpersuasive and tepid lies.

It is a movie that expects us to believe that one can walk into a 100-story skyscraper situated in Columbus Circle run by an apparent multinational corporation, catch a look at one of the badges behind the desk, and assume one of the names. (Only an hour before the screening, my photo had been taken for a temporary badge so that I could participate in a twenty minute meeting in a building that had fewer stories than Oscorp, which I much preferred as a sprawling industrial complex in the Raimi movies.) It is a movie that expects us to believe that an impostor can enter a top secret facility standing thirty feet away from the door leading in and observe a scientist, who just happens to be there, tracing a pattern-sensitive code into the panel with his hand (no thumbprint or retinal scan or surveillance cameras?).

It is a movie that expects us to believe that a hero, unable to use his considerable strength just after being bitten by a spider, will be curiously inconsistent in how he destroys things. Peter Parker clicks on a mouse without incident, but the keys rip off the keyboard as he types. He destroys the bathroom sink, but his skateboard is remarkably preserved. It is a movie that expects us to believe that a kid possessing reflexes beyond the pale would not be recruited by a sports coach (Studio Executive to Producers: “We can’t do that because of the wrestling element in Raimi’s first movie. That bastard! Why did he bolt on us?” Producers: “Because he wanted more time to develop the script!?”) and would not be examined by scientists or specialists for his off-the-charts ability. The movie simply assumes that a preternatural ability to warp a goal post with a football (is that even physically possible with cowhide?) is par for the course among high school teens. (“We’re very excited about the creative possibilities that come from returning to Peter’s roots,” said Amy Pascal in a statement when Sony put the kibosh on Spider-Man 4. Apparently, “creative possibilities” involve a remarkably unprofessional failure to work out story logic.)

I put forth the modest proposition that a movie containing this much paralogia should be rejected by a mass audience. It is one thing to accept a webslinger sailing through the Manhattan skyline on threads that couldn’t possibly be tensile enough to hold a 160 pound man. One must, after all, suspend some disbelief for a film of this type. But we are not dummies. And it is the job of the Hollywood professional to make us believe in the impossible for a few hours.

It is also the responsibility of the professional to give the protagonist an interesting antagonist: ideally, someone who shares similar qualities and who is just as dimensional as the hero. What have screenwriters James Vanderbilt, Alvin Sargeant, and Steve Kloves given us? The Lizard (aka Dr. Curt Connors), who was capable of telepathic communication with other reptiles and was nuanced enough to help Spidey a few times in the comics, is a dull and plodding villain barking ho-hum soliloquies into his video camera and booming loud and not especially inventive three-word threats to Peter Parker. In this cinematic manifestation, he is such an underwritten and bland character that director Marc Webb, who seems to have carved out the inventive eye he brought to the marvelous (500) Days of Summer for the money men, constantly has his camera fixated upon Connors’s missing arm even after we have a pretty good idea that the experiments at Oscorp will cause it to grow back. I became so distracted by this that I was able to figure out where Rhys Ifans’s pre-CGI arm was with little effort. But as we have already established, Webb and his army of hacks aren’t especially interested in believable magic tricks.

“Don’t break promises you can’t keep,” says an English teacher at Midtown Science High School to Peter Parker, as he stumbles late into a classroom near the end of a broken cinematic promise. “Yeah,” Parker replies, “but those are the best ones.”

Actually, the best promises were fulfilled by Sam Raimi. Even Spider-Man 3, which had its share of problems, was free enough for Raimi to stage that gloriously cheesy scene in the jazz club. There isn’t a single scene in Webb’s hacktacular reimagining that comes close. Raimi understood that Spider-Man was the most endearing of Marvel’s superheroes: the bullied geek finding integrity through his superpowers. While Andrew Garfield is a handsome enough lead man, he doesn’t look like the kind of guy who would be beaten by schoolkids in a previous life. He’s too jittery and bewildered and spastic in his delivery to tend to a friendly neighborhood. It doesn’t help that he has a vague Jersey dialect which flits in and out, out of character for a guy ostensibly from Queens. But then the New York in this movie is some bizarre hodgepodge of the seedy Abraham Beame days (people apparently drink beer on the Q line and it’s too dangerous for a fit older woman to walk twelve blocks to a subway station at night) and something vaguely approximating a period that could be now or could be the 1980s (how else to account for the Rubik’s Cube that Uncle Ben picks up in Peter Parker’s room or the curious lack of texting among teens even as they are using smartphones?). While I accept that a comic book movie is going to stylize a city however it wants (Raimi was audacious enough to include an elevated line running through Manhattan), should it not be rooted in true imagination rather than careless what-the-hell incoherence? (On this point, the movie seems curiously self-aware of its fallacies. Not only does The Amazing Spider-Man lack the guts to utter the famous line “With great power comes great responsibility,” but an Einstein poster appears in Parker’s bedroom with the immortal quote, “Imagination is more important than knowledge.” If ever there was a filmmaker who misunderstood Einstein, it’s director Marc Webb.)

That slipshod quality extends to Peter Parker, who inexplicably clings to an analog camera in an age when nearly every aspiring photographer his age is likely to be using digital. Hilariously, Parker’s camera has PROPERTY OF PETER PARKER in embossed tape on the back, which conveniently allows a villain to find him not long after he tries snapping a few secret photos. (By comparison, notice how our first introduction of Raimi’s Peter Parker as photographer involves Parker asking permission at a museum just before he snaps a spider for the “school paper,” only for a bully to push Parker and mess up his shot. In a matter of five seconds, Raimi and screenwriter David Koepp established that (1) Parker is polite and destined to work for a paper to expand his scientific and journalistic interests and (2) he is also doomed to face bullies who will mess his vocation up, whether as crime fighter or photographer.)

And how can you have a Spider-Man movie without J. Jonah Jameson? Then again, after J.K. Simmons, why would you dare to cast another actor in the part? Jameson’s disapproval of Spidey is passed off to Captain George Stacey (played by Denis Leary, who seems to have turned into a poor man’s David Caruso, just as he was once a poor man’s Bill Hicks). But here’s why Jameson is so important. Peter Parker was able to work at the Daily Bugle trying to impress Jameson with his photos, while simultaneously facing Jameson’s smear campaign against Spidey. In light of the fact that he has no father figure, Jameson almost serves as an intriguing surrogate. Webb’s film has Captain Stacey insisting that Spidey is a menace, ordering the cops on his side. But we don’t believe it — in large part because Captain Stacey also views Parker as a kid with “psychiatric problems.” Yet it’s clear that Spidey is working on the side of good. However, we can believe that a media mogul would want to manipulate public opinion for his own selfish ends. Sure enough, Webb and his writers lack the deft hand to see Captain Stacey’s resentment through to the end.

I haven’t even brought up the Gwen Stacy story — in large part because Stacy, who was such a central figure in the comic books (memo to Mr. Webb: not especially wise of you to feature a prominent NYC bridge in your Spider-Man movie because it spells out how risk-averse and how out of your league you really are), is little more than a head-bobbing, limb-shuffling, one-dimensional, big-eyed love interest for Parker. In Raimi’s version, Mary Jane lived a few houses down from Parker. There were hints that a troubled family lived inside. Raimi even had the courage to have Parker mutter his feelings for Mary Jane while walking behind her: an uncommonly sincere moment that made us relate to Parker’s wistfulness in human terms. What does Webb offer us? Gwen Stacy’s photo on Parker’s computer.

I suppose I’m dwelling upon the many human elements that went awry because the comic book story here is boring and unsatisfying. While this movie is not as bad as any comic book movie with “green” in the title, I did not feel a single second of awe or excitement during The Amazing Spider Man‘s 136 interminable minutes. Once again, there was no real justification for the 3D: not even the ridiculous Spidey POV shots that Webb desperately introduces as a personal stylistic flourish. There also needs to be a moratorium on Stan Lee cameos.

We have seen origin story after origin story, and, after two Hulks (2003 and 2008), Iron Man, Thor, and Captain America, it’s all becoming wearisome. At least with The Avengers, the spandex ass kicking began fairly early and there was decent acting and a few good lines and a rousing Alan Silvestri score and an endearing Hulk. But the comic book movie has become a drag. Nobody says “fuck” or fucks or drinks or does drugs or gets into serious trouble. Nobody really lives. Imagine how truly amazing these movies would be if somebody took a human chance.