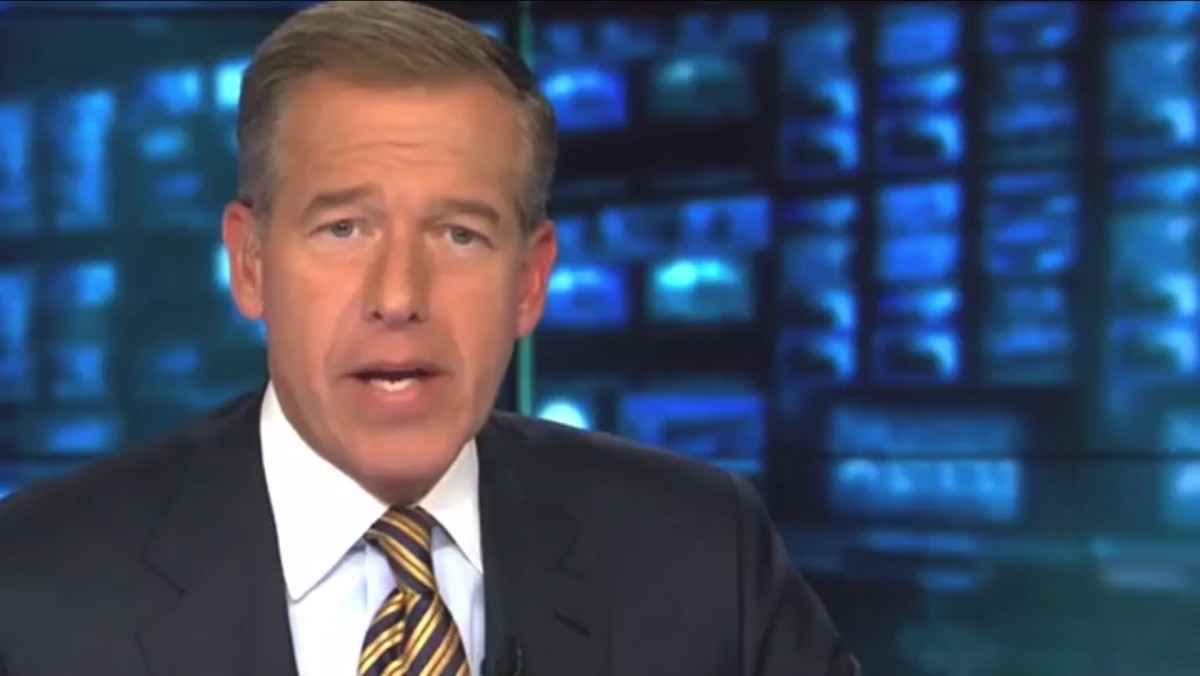 NBC News anchor Brian Williams has been under fire for misremembering a 2003 Iraq helicopter incident. We investigate in detail how Mr. Williams has talked about his life. Can the news industry ever tolerate the human?

When a public figure goes well out of his way to tell a dubious sounding Horatio Alger story in interview after interview, especially one that is permanently soaked in a saccharine bath of American idealism, it is natural to be skeptical. It is also quite healthy to take authority figures to task for their flubs and gaffes, especially when we entrust them to tell us the truth.

I have spent the better part of a day sifting through profiles and speeches and documents, speaking with very helpful and overworked people at fire departments and restaurants, entering into email volleys with university registrars, and chatting with Catholics. I am forced to conclude that NBC News anchor Brian Williams is probably not a liar.

After corroborating the details of Williams’s life story with numerous sources, I have discovered that Williams’s mind has been mostly precise when recalling the details. The one notable exception — and this has caused justifiable controversy — is Williams’s claim that he was on board a helicopter during the 2003 invasion of Iraq, which was recently called into question by three Army officers courtesy of the reporters at Stars and Stripes. But another officer — Rich Krell — has presented a third alternative that lies somewhere between Williams’s story and the other officers, turning the tale into a veritable Rashomon for media junkies.

Aside from stretching his short stint as a volunteer firefighter out to “several years” and fluctuating his upbringing between “grindingly middle class,” “solidly middle class,” and “classic middle class,” I have discovered nothing that would lead me to impugn Williams.

“My break came when Betty Endicott, news director at WTTG in Washington, called me into an office and asked me to close the door one day. She said, uh, ‘They told me you used to do this. You did on camera. You did small market television in news.’ And I said, I said, ‘Yeah, I did. Briefly. It was an experiment. A failed experiment.’ She said, ‘Do you have any tapes?’ And I said, ‘Well, they’ve long since been burned and taken to a licensed landfill facility outside of town.'” — “Brian Williams: My First Big Break,” February 2, 2012

Somewhere beneath the relentless layers of pancake makeup, an anchorman projected onto ten million television sets is as human as the rest of us. While we are privately jostled by our friends for missing a few key details in a juicy anecdote, Williams must tell the same stories over and over: building upon his narrative, embellishing it, and risking more if he slips up once. And because his highly scrutinized vocation is committed to a rigid objectivity, he’s never allowed to gush over a subjective experience like the rest of us. This accounts for why Williams repeats phrases like “licensed landfill facility” when he discusses how he buried his early resume reel as a struggling young man. The specificity sounds suspicious. It’s preposterous enough that someone would go all the way to a refuse site to dispose of an incinerated 3/4″ videotape, but why should it be called a facility? And why qualify it with the “licensed” modifier? Why not just say that you eviscerated the damn tape in grandiose despair? Well, how many of us have to willfully repeat the same stories hundreds of times with a camera watching over us? 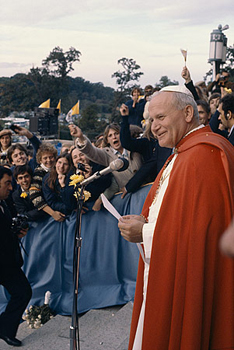 Public figures — especially ones committed to mainstream journalism — don’t have the luxury of expressing passion and exuberance so freely. So when Williams talks of “meeting” Pope John Paul II “by positioning himself at the top of the stairs of the Shrine of the Immaculate Conception” in October 1979 at Catholic University (the registrar confirmed with me that Williams was a student in the School of Arts and Sciences at the time), and an article with an accompanying photo reveals that the Pope was actually speaking on the steps (see right), should Williams be called a liar? Or can we let him off the hook by remembering a younger time when we “met” someone we admired simply by standing in close proximity?

The most significant inconsistency I found was in Williams’s flight from George Washington University to Pittsburg, Kansas, where Williams began his first (and unsuccessful) anchoring job at KOAM TV, working for $168 each week. In a 2013 interview with Alec Baldwin, Williams claimed that he packed up his belongings in the backseat of his Dodge Dart, along with his dog Charlie. But in a May 3, 2005 Landon Lecture at Kansas State University, Williams noted that he had bought a Ford Escort at Coffeyhouse Motors and claimed, “I rented a truck and I threw my trusty cocker spaniel in the front seat and I pointed my truck west from Washington and I moved to Kansas to start a new life and a new career.” Howard Kurtz’s The Reality Show: Inside the Last Great Television News War reports yet another version:

The unpaid bills and college debt piled up as Williams labored for meager wages, and when his Dodge Dart died one day in a cornfield, Bengston helped arranged a loan for a Ford Escort. But not even a new set of wheels could get Williams to a bigger market….Clearly, he had failed. Williams packed his dog, Charlie, into a Ryder truck, drove to Washington, moved into a basement, and took a courier’s job at the National Association of Broadcasters, delivering documents in a red station wagon. It was a huge comedown.

It’s worth pointing out that all of this occurred thirty-five years ago, a year before Williams got his big break at WTTG with news director Betty Endicott. Williams had landed a job as a chyron operator. Endicott learned that he had once been a reporter and promoted him on the spot. Willilams was covering the Pentagon not long later and on his way to an illustrious career. There is, of course, no way to confirm the conversation that transpired. Endicott is dead. The talk was behind closed doors. We have only Williams’s word for it. But it’s these details that are clear, not the struggle that led up to it. And why not? A successful person defines himself by the first moment of success, not necessarily by the incremental “fail better” moments that came before.

Which brings us back to Williams’s snafu with the helicopter. His memory, which is riddled with inconsistencies, is pitted against the memories of the Army officers. But Williams’s statements over the course of twelve years get opened up to public scrutiny. This isn’t the case for the officers. While it is undeniably interesting to see how Williams’s story changed, it also gives Williams an unfair disadvantage.

If CNN reported how I remembered an episode on December 31, 2000, it would probably read as follows:

January 1, 2001: In a largely illegible journal entry, Champion tries to recall what happened the night before in a drunken haze. “Clothes discovered on floor the next morning. Who is this woman lying next to me?” He doesn’t say that he made it with the woman in question, much less her name, only that he learned about her the next morning.

September 2001: Champion self-publishes a chapbook, Tortured Youth, that details the New Year’s Eve incident. The account is vague. A friend, who generously hands over the three dollars for this undercooked offering of autobiographical nonsense, credits “one of the Goth girls I see hanging at Elbo Room” for spotting Champion during that celebratory evening. The reader is told “We entered the apartment,” but the passage doesn’t state who made the first move, or Champion’s exact location. Whose apartment was it?

March 2004: During a secretly recorded chat, Champion speaks of that day in 2000 to an acquaintance who insists on documenting every moment for posterity. “I think I made the first move, but I can’t be sure. I was trying to put one foot in front of the other. Some stranger may have thrown a bottle at us.” This description suggests that Champion was under attack.

March 2006: Champion refers to the bottle attack, but cannot remember the woman’s name. Someone suggests that what happened on New Year’s Eve five years ago was probably nothing, but Champion recreates his artful leap from the exploding bottle on the ground, which he seems to recall more vividly than the woman.

February 2015: Champion tries to remember how he remembered that New Year’s Eve evening while writing about Brian Williams, realizing that if he had to deal with such insufferable media scrutiny on a regular basis, he’d be called a goddam liar for the rest of his natural life.

The above silliness is inconsequential to me. But if I were in any truly influential position, I am certain that it would be used against me.

Do news people have the right to tell their own stories even as they maintain objective stances on stories that they merely report on? Given the Choppergate ballyhoo, probably not. Or perhaps it’s just Williams who isn’t allowed to. He has made appearances on The Daily Show to demonstrate that he has a sense of humor, even as his nightly appearances on NBC suggest that he is something of a stiff. Television does not allow Williams to merge the two identities. Williams must carry on with these roles, adhering to the mandate embossed into the desk by top brass. Television news would be far more honest if Williams were to appear one night with a chainsaw, destroying his desk with a savage violence while reciting the news in a calm and objective voice. But if we can’t have that, maybe we should cut the guy some slack.

[2/6/15 UPDATE: Think Progress‘s Jessica Goldstein consulted several noted psychologists about the science of memory and how it applies to Williams. From Professor William Hirst: “You build your memories as you go along. We consolidate memories. There’s also evidence that, every time we retrieve a memory, it makes it vulnerable to reconsolidation. So if we retrieve something and tell that story at a dinner party, and slightly exaggerate your role, it reconsolidate to incorporate that exaggeration. And the next time you’re telling it, you’re building on that. You can see how the story can grow. And the stories we end up telling reflect the social framework in which we live.”]