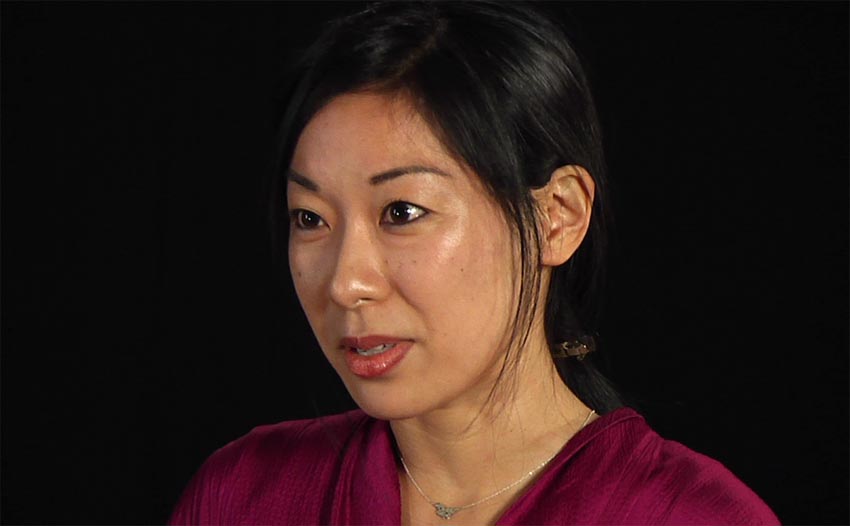 Katie Kitamura is most recently the author of Gone to the Forest.

This episode of The Bat Segundo Show is brought to you by Audible.com. If you want to listen to Katie Kitamura’s The Longshot, and help keep this show going, sign up for a free audiobook and a 30 day trial. Use this handy link: http://www.audiblepodcast.com/bat

Condition of Mr. Segundo: Hoping not to fall in a pool of ash.

Subjects Discussed: Similarities between Gone to the Forest and V.S. Naipaul’s A Bend in the River, Jean Rhys’s Wide Sargasso Sea, how courage is often confused as a sentimental quality in fiction, reversing character dimensionality to make points about colonialism, straying from influence, Elfriede Jelinek, Herta Müller, moving away from long sentences, deliberately writing in a misogynistic voice, the NYPD ordering women not to wear skirts at night, how vivid voices can transcend unsettling narrative modes, the dangers of writing from a repugnant perspective, the morality of the authority, not being a violent person and writing about violence, The Longshot‘s fight scenes, empathy, the Flaubert writing maxim, training in classical ballet, not looking at the book once it is done, not reading the violent parts of Gone to the Forest aloud, Japanese for Travelers, tracking the Kitamura descriptive trajectory across three books, reinforcing stripped down sentences with metaphor, considering ideas beyond the human, why Kitamura finds fiction more freeing than nonfiction, writing The Longshot with a rhythmic physical quality in mind, Kitamura’s difficulties in writing first person, how first-person characters reflect an author’s character in revealing ways, truths revealed through a concentrated third-person mode, the burdens of feeling self-conscious on the page, choosing removed topics for fiction, the death of Kitamura’s father, differing notions of grief, being sucked into a pool of ash, how humans become absorbed by the physical landscape, the relationship between land and power and property, the charisma of a dying man, the misnomer of “peaceful death,” Karl Ove Knausgaard’s A Death in the Family, the marks of grief, how translated works of fiction sometimes provide greater human truths than Anglophonic ficiton, China Miéville’s Railsea, awkward language and the virtues of badly translated fiction, Clarice Lispector, attempts to talk in the pouring rain, active thinking (or the lack thereof) within fiction, Embassytown and linguistic theory, Samuel R. Delany’s Babel-17, mosquitoes that chomp on Our Correspondent’s forehead during an interview, political unrest (and its duality within Gone to the Forest), how volcanoes serve as inspiration for fiction, and mixing differing countries and differing times and differing histories into an invented world.

Correspondent: I was reading this book and, in the first few pages of Gone to the Forest, there’s this reference to a radio, as well as a house sitting on the edge of the river. And as someone who is reading all the Modern Library classics, including Naipaul’s A Bend in the River, I said to myself, “Hmmmm. Isn’t that interesting?” And then I read a reference to “Sargasso weed,” which made me say, “Oh! Maybe this is sort of a Jena Rhys/Wide Sargasso Sea response to Naipaul.” And I’m wondering about this. Because there are certainly a lot of similarities to A Bend in the River. You have, of course, the unnamed country, the rebellion, the subjugation of women, a not so bright condescending young heir. You also, however, feature this vicious volcano, a dying father, and a terrible gang rape. And so I must ask you, first and foremost, was this at any point intended as a Jean Rhys-like response to Naipaul? How was A Bend in the River a starting point for this book in any way?

Kitamura: I read A Bend in the River before I started writing the book. I don’t think it was necessarily formulated as a response to it directly, although I like that reading very much. And I would love to think that I’d written a Jean Rhys-like response to it. I mean, I think partially the reason you get that sense of Jean Rhys against Naipaul is because the book is trying to write from the fragments of this long legacy of colonial literature, in particular. And Jean Rhys, more generally, is a writer I admire incredibly. Not just Wide Sargasso Sea, but also all the other novels. So her prose style, her directness, her sense of melancholy — I think courage is a word that could easily sound sentimental in the context of fiction, but there’s incredibly courageous fiction in writing about women. So, yeah, it’s not direct, but it’s probably in there in some way.

Correspondent: Well, let’s talk about such side characters as the Wallaces, who reminded me also very much of the historian and his wife in A Bend in the River. You have a situation where they’re described as “marginal people of no interest to his father” — his, of course, being Tom, this protagonist who mimics the scummy figure in A Bend in the River. They immediately ask Celeste to prepare a meal for supper. And I’m wondering. Because the Wallaces to a large degree don’t have that dimensionality that you would normally expect from the imperialist/colonial type of figures that tend to populate these kinds of novels. I was wondering if the Wallaces were an effort on your part to invert the dimensionality, giving more dimensionality to, say, people like Jose, as opposed to these imperialists who really assume that all natives are there to be immediately put to work and so forth.

Kitmaura: I think the book as a whole, the context of it, is pretty wide. Because it’s a combination of multiple colonial settings and multiple histories. So it’s this fragmented collage-like panorama. It’s not set in a specific time. Therefore, it includes multiple times. So I think against that, I wanted to focus very, very tightly on what happened to a single family — and ultimately with Celeste and Jose, although they are servants, they are also family — on this farm. So all the other characters outside of that became secondary in some way. And also, I suppose it was a novel that’s about power and not just some relationship between whites and non-whites, but also class between the different white settlers. So I think in that particular characterization, I was interested in drawing the distinction between how the old man, the father in the novel, perceives himself against the other white colonialists. And now he makes distinctions. So in a way, they are just a foil to the old man’s arrogance.

Correspondent: You mentioned reading Naipaul before writing this book.

Correspondent: And the question I have is, well, to what degree did you know that it’s time to stray? “I’ve got it in my head. I’m very familiar with what he has done and now I can carry on with this more metaphorical or more minimalist approach to metaphor.” At what point did you detract from Naipaul? And at what point was he just not even necessary?

Kitamura: I mean, I think the unnamed setting in that novel is so distinct. And the way he handles that is very distinct. And I knew that I wanted to do something that was not simply unnamed, but also completely imagined. So that was a kind of distinction I wanted to make from what he had done in that novel. The themes that he writes about honestly are critical, but the prose? I was never influenced by his prose style, for example. There is a host of other writers — really, European female writers — that I was much more influenced by.

Correspondent: Such as who?

Kitamura: For this particular novel. It’s kind of a funny thing where it changes almost with each project.

Kitamura: Your toolkit alters slightly. I think I was reading a great deal of Elfriede Jelinek and Herta Müller. And what I was interested in is that they don’t write these beautiful long sentences. They really break language in a lot of ways. And that was what I admired, what I thought was so striking about what they were doing, and I was also curious to see if that, in some way, could be used specifically to address a female subjectivity. So there’s the sequence: the rape scene in the novel, which is one of the more difficult parts of it. There’s a lot of breaks and fragments in that particular section. And I think there is such a long tradition of male narratives and male narrativizing, and I wonder if that hasn’t been made accessible to women in quite the same way historically. And I wondered if that was partly why this fragmentation was interesting to me and why I tried to use it.

Correspondent: I wonder if the fragmentation, especially in relation to this rape scene, was interesting to you, specifically because, well, one reads it and one is, of course, appalled by what’s going on. But at the same time, the sentences are informed very much by this need to present this as relatively normal in the confines of this catastrophe. It seems to me that you’re someone who probably who will really work and work and work to get that acceptable level so it tests the reader and it suggests almost, I suppose, a cultural relativism or a moral relativism in the way that you describe that action. What did you do to get that particular balance that I’m detecting here? To get that situation where, okay, I come in and I’m appalled by it. But at the same time, I’m also being forced to look upon this as “This is part of life.”

Kitamura: I wanted to create — the purpose of this rather extravagant volcano explosion was to create a space where social rules were being suspended and where you would see, in this case in particular, a man taking advantage of that suspension of laws. And I remember before I started writing that sequence to get the voice of it right. I wanted to try writing in a misogynistic voice, which I thought would be an interesting experiment as a woman. And I initially thought would be a difficult or an impossible one. But, in fact, it’s so easy. Because misogyny is everywhere around you. And the language of it is everywhere around you. And so some of the things, even that the girl says, are invisible quotation marks. She is kind of quoting in language of chauvinism that she has grown up in. And I know it’s a kind of morally ambiguous scene. She, to some extent, seems to instigate what happens. But what I wanted to really look at was — well, I completely, as you probably will guess, disagree with the notion that all women can in some way provoke any kind of sexual violence.