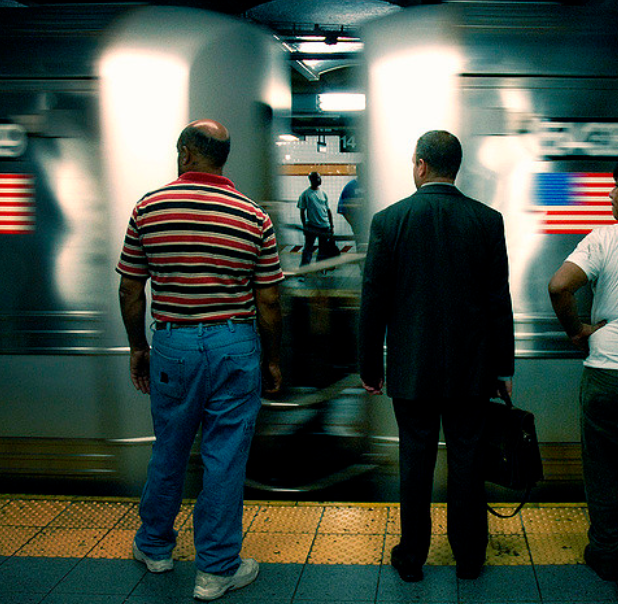 An unanticipated subway showdown that transformed into an unexpected dialogue has me reconsidering a recent dramatic decision.

Sometime on Monday afternoon, after having a lavish Indian lunch to take care of myself, I started cultivating a “you can’t stop me” attitude. Maybe it was the spice in the chicken tandoori, but some inkling of the resilient man I sometimes am kicked in as I resolutely refused to be distracted by the headlines or any superficial social media dust-up.

A few hours later, I was getting off the subway and some loutish man pushed me. I recalled how a fireman had pushed me not long after the November election as I was minding my own business walking down a sidewalk and how I had then said nothing. I felt a wave of adrenaline.

I turned around. He was a medium-built man, roughly my age, with a dark blue sweater that was preposterously at odds with the New York look he was trying to will into his eyes.

“Because it’s rude,” I said, “and nobody here made you king.”

“Do you want to start something?”

“If you want to step outside and we both agree not to press assault charges on each other, then, yeah, we could go a few rounds. I personally guarantee that I’ll clean your clock. But I really don’t want to do that. I just want you to understand that, as a human being, you can’t go around pushing people.”

“I can push anyone I want.”

“I said, how was your day? Shitty? Is that why you’re pushing people?”

“And you don’t want to fuck with me. So let’s not fuck with each other. Seriously, are you having a shitty one? Mine hasn’t exactly been the greatest.”

And that’s when I saw the sadness in his eyes. Then he started telling me a story about how he snooped through his girlfriend’s texts and learned she was cheating on him and had not yet talked with her about it and how his boss was chewing his ass out. But I somehow summoned my wit and made him laugh a few times. I told the man that I had to go, but that I was really glad he opened up to me. He told me that he would stop pushing people. I wished him well and we gave each other a fist pump. This all went down in about five minutes.

And that exchange, which could have easily exploded into violence, somehow didn’t. And it has caused me to reconsider a rather dramatic decision that I made in the last few days. I still need some time to sort out how I feel and what I’ll do. I’ve enjoyed being disconnected from social media and being reminded that in the real world, which is the only one that counts, the beefs that people start with each other are more easily settled. Because it really makes a difference when we’re looking at each other. We’re more willing to feel something and see an unruly person as human.