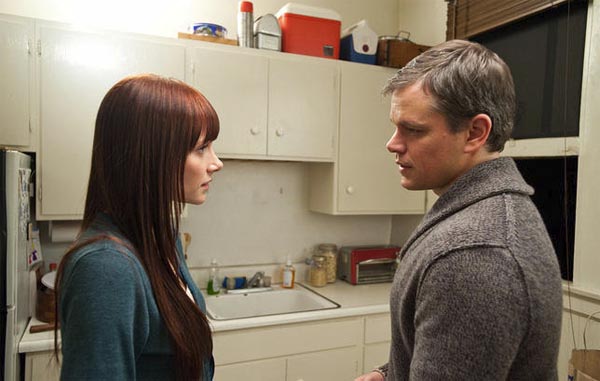 It seems inconceivable that Clint Eastwood would direct a film that uses the facile falsehood of psychic ability to drive its story, and that Peter Morgan (Peter Morgan! The man behind Frost/Nixon!) would write the screenplay.

[This is the ninth in a series of dispatches relating to the 2010 New York Film Festival.]

It seems inconceivable that Clint Eastwood would direct a film that uses the facile falsehood of psychic ability to drive its story, and that Peter Morgan (Peter Morgan! The man behind Frost/Nixon!) would write the screenplay. Eastwood, who told the tale of a bigoted Korean War vet adjusting to multicultural reality in Gran Torino, explored moral complexities with The Unforgiven, and expressed a willingness to invert 20th century historical expectations with his 2006 pair of World War II pictures, is hardly a fool. And he’s certainly not the type who would suddenly show up on late night TV with a psychic hotline – even when one accounts for such late-career misfires as Space Cowboys and Blood Work. But I’m pained to report that Eastwood’s latest film, Hereafter, is so utterly preposterous and condescending that I actually longed to revisit The Eiger Sanction. At least that disastrous film had some soul in the unlikely George Kennedy.

Psychic ability is not only unscientific. It is one of the most egregious and overused plot devices used to advance a story, particularly those which are outside genre. Indeed, even the Star Trek: The Next Generation series bible – a document for a franchise that proved too complacent to steer out of its utopian comfort zone – was careful to forbid its writers from including such omnipotent character types. Psychic ability is the reason why the fourth Indiana Jones movie was such a dud. It is often the reason why some cheesy movies are best enjoyed with friends over beer. And when Spielberg’s regrettable name emerged as executive producer during Hereafter‘s end credits, I immediately wondered if Morgan and Eastwood had been pressured, much as George Lucas and Spielberg had muscled out Frank Darabont during Kingdom of the Crystal Skull, to insert such nonsense into a later draft. After all, consider one side character at a resort who offers the line, “As a scientist and atheist, my mind was closed to this,” and who then states that the evidence is “irrefutable.” It’s almost as if this script was designed to recruit wild-eyed naifs.

What the fuck, Clint?

Whatever the film’s production history, I doubt that any of us will be privy to it anytime soon. There’s just too much money and too much power at stake to get an accurate glimpse through the dust motes. Maybe it’s possible that age has finally caught up with the old gunslinger and he’s now firing blanks. But what we have in the meantime is a colossal dud that is easily the worst film of Eastwood’s career. It’s as if Eastwood has traded in his class for the cash. Sure, Eastwood directs a pleasant scene with Matt Damon and Bryce Dallas Howard (who appears as a fresh San Francisco transplant escaping a bad breakup in Pittsburgh – or possibly Pittsburg, over by Antioch; whatever the case, she’s just about the only character in this movie with personality) flirting with each other in a cooking class. One wears a blindfold. The other spoons in mouthfuls of sauce. It’s hardly 9 ½ Weeks (or even Hot Shots), but the two confess their real reasons for attending night school. Alas, just as this promising relationship develops, Matt Damon’s George confesses his secret talent – which is the ability to find psychic connections within people, a “talent” that filled up the coffers in halcyon days. (That George asks each recipient to only reply to these sessions with yes and no answers, and that he wins them over with such painfully leading inquiries – “You’ve lost someone recently” and so forth – leads one to believe that he’s a con. Unfortunately, the film lacks the courage to view George’s ability as even vaguely illegit, and his internal conflict is narrowed as a result. This is too bad for Damon, who offers a quietly commendable performance here. Indeed, his graying hair and sad mug reminded me of a young Gary Cooper.)

In Hereafter, Eastwood is sometimes competent at conveying the visual isolation of his characters by having them depart into dark corners of a room, where their faces blend into the dark murk. Such old school panache would be welcome if Eastwood wasn’t operating off of a script that’s stacked with unacceptable and unpersuasive anti-human twaddle.

Hereafter is a three-plot story that takes place in three countries, and that ties up through several highly contrived circumstances at the London Book Fair. It is a movie so fundamentally stupid that it believes that some kid can call up a publisher and find out which hotel a famous Frenchwoman is staying. It is naïve enough to presume that someone who toils at a sugar factory can pay rent and live alone in what appears to be a spacious North Beach apartment. (The press information sheet I have laughably refers to this character as “a blue-collar American.”) It believes that book publishers will actually have the time and the decency to set up a failed manuscript (written by a troublesome author who can’t even turn in the Mitterrand book she promised) with another house.

What else can one expect of a flick that offers psychic ability as its great instigator? But nobody goes to a Clint Eastwood film to get frequent flashes into a shadowy white realm occupied by dead souls. That’s M. Night Shyamalan territory. And it’s extremely disheartening to see a living legend adept with human nuance debase himself like this.

I didn’t so much mind the surprise tsunami at the film’s opening or the unanticipated explosion close to the film’s end. Such melodramatic interventions are not only the stuff of crass Hollywood, but recent headlines. But I couldn’t abide Morgan’s veneer-thin stereotypes. Aside from the one-dimensional George, you have Marie, the celebrity journalist (so famous that she’s appearing in BlackBerry ads; how’s that for journalistic integrity?) suddenly incapable of asking the tough questions after surviving death and who doesn’t understand why her tale of phony psychic victimhood won’t sell. You have Marcus, the angry kid who pickpockets 200 pounds and won’t talk to an adult about his grief. (Hey, Peter Morgan, ever heard of a little thing called counseling? Social workers don’t just knock on doors.) Morgan doesn’t even nudge us towards how these three vapid and disparate stories will merge together. I mean, even Paul Haggis had the decency to do that. And he doesn’t give us much reason to care.

Amidst such anemic archetypes, Morgan makes a foolish move and references Charles Dickens, informing his audience of a novelist who created quirky and unforgettable characters and telegraphing that, with this script, he’s nowhere near the same league. And if that isn’t enough self-sabotage for you, believe it or not, Morgan actually has George visit Dickens’s house!

And consider these lines:

“I don’t want to be here without you!” (during a moment of angst-ridden confession)

“I promise you I’m not going to let you down.” (during a moment of overwrought crisis)

“It’s what you are! You can’t run from that forever!” (during a moment of confidence building)

“I didn’t know you were going to be here.” (during a “surprise” run-in)

If Peter Morgan is not nominated for a Razzie for these unpardonable cliches, and for such an unfathomable surrender of his faculties, I will be stunned.

But Morgan isn’t the only one here who should be thrown to the wolves. It was Clint Eastwood, a man of advancing years, who signed on for this nonsense. It was Eastwood who knew damn well that he has perhaps a handful of films left in him and who believed that this shoddy material was the place to deposit his talents. This film is beyond embarrassing. It’s indefensible.