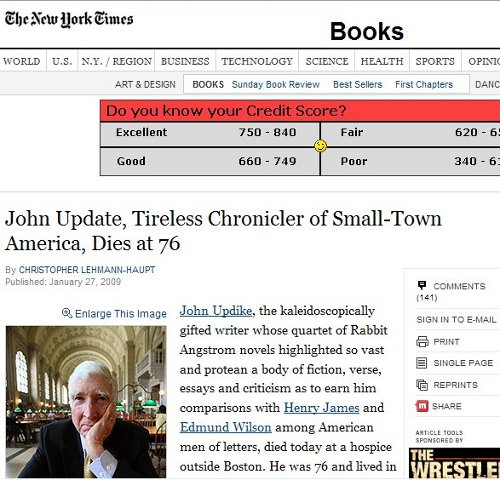 [UPDATE: Apparently, it’s amateur hour at the New York Times. After fixing the above headline, Matt Bucher observed that The Broken Estate was not published in 1966. James Wood was then only a year old. (And, no, the above screenshot wasn’t faked. I resized it to fit it into the window.)]

[UPDATE 2: More errors in the piece. “More important, the move to a small town seemed to stimulate his memories of Shillington and his creation of its fictional counterpart, Ollington.” It’s Olinger. Also, John Updike was interviewed by the Paris Review in 1968, not 1967. Also, it’s Terrorist, not The Terrorist. It should be “outsized talents,” not “outsize talents.” Good Christ, don’t they employ copy editors and fact checkers at the Gray Lady?]

[UPDATE 3: The Gray Lady has fixed these errors, without “regretting the error.” In the haste of my horror, I added an extra L to Olinger — as pointed out by a pedantic commenter named Albert. This has been fixed. I regret the error.]