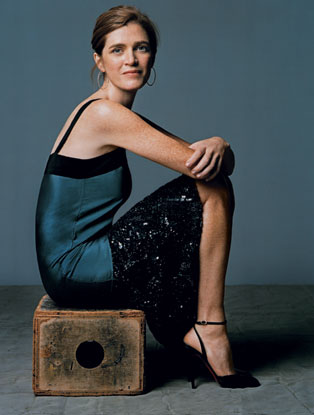 Samantha Power, author of A Problem from Hell and Chasing the Flame, has announced that she will turn her attentions to “more entertaining, less challenging” books in the wake of recent developments. Expressing dismay that her thoughts on weighty matters were overlooked by off-the-record remarks, and that she was now being relegated to the Fashion & Style section of the New York Times, Power pledged that she would now “give the people what they want.” And if that meant abandoning important probings into American foreign policy that the people needed to know about, this was simply how the cookie crumbled.

“I’m 37,” said Power in a telephone interview. “I still go to the gym. I still have a body. And if the American people prefer my body to my mind, then who am I to argue? I’d rather just move forward and put the Obama incident behind me.”

Power reported that her third book would be a meticulously researched biography on Beyoncé, with the working title, Dreamgirl: A Woman’s Only Choice in America.

“I’ve already talked to hundreds of people close to Beyoncé. Only a handful grew uncomfortable at the mention of Raphael Lemkin.”

Expressing approval for these unexpected developments, Larry Flynt offered Power $500,000 to pose naked in a future edition of Hustler. “That’s the great thing about America,” said Flynt. “Even when a woman’s as sharp as Samantha, she still has anatomy.”

Power did not offer an answer as to whether she would take this offer. But she did say that it was good to have some insurance “if the Beyoncé book tanked.”