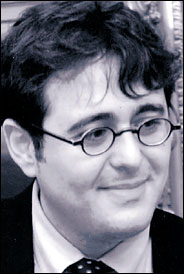 New York Sun critic Adam Kirsch stunned a young literary couple in the Upper East Side when he was observed attempting to crack a joke to a Starbucks barista. The couple, knowing of Kirsch’s humorless writing, were especially astonished to see Kirsch actually converse with someone in a class beneath his station.

“He didn’t act as if she didn’t exist. The way he usually does,” said Gloria Reynolds, a 35-year-old stay-at-home mother and Caitlin Flanagan fan. “He actually asked her how he was doing, and then he tried out a zinger!”

“It was a knock-knock joke,” said Harold Bentley, a 32-year-old investment banker. “Nothing great, mind you. But it was a start.”

Sources at the New York Sun reported that Kirsch entered into an argument with a copy editor. Kirsch threatened that he would leave the paper if his piece did not include a sentence that began “You might be a redneck if….” The copy editor was then fired without severance pay by New York Sun management.

“There may still be a chip on his shoulder,” said the Sun‘s books editor, David Wallace-Wells. “But at least it’s now a funny chip.”