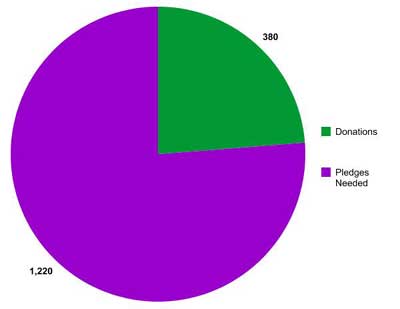 First off, thanks to those who have pitched in, both with kind words and dollars, to the August pledge drive.

For those who missed out on the Save Segundo Campaign, here’s an update on where we’re at. We’re still working hard to line up advertising for the show and have had a few kind leads and nibbles (nothing firm yet), and we will be stepping up our efforts big time in the next few weeks. We have also scheduled as many interviews as humanly possible during the time we have left, which is roughly around mid-September. (We’ve just released two more shows, and we’re planning on releasing a very special show, which involved a considerable amount of reading and preparation for a forthcoming guest whose time we certainly don’t want to waste, later this week.) The hope is to keep Segundo going uninterrupted for the next few months. However, we’re still facing a shortfall for our pledge drive. And if we can’t raise these funds, which represent a stopgap between the present and a future time in which we will have advertisers in place, then we’ll be forced to abandon Segundo for a month or longer while we scrape together the money to stay afloat. And if that’s what needs to be done, that’s fine.

But we’re hoping that we can continue to keep Segundo on the air without interruption. There are many authors coming through in late September and October who we’d like to devote our energies to. Your continued support of the show through this pledge drive will help us to carry on at the pace of eight shows a month.

So if you’ve enjoyed Segundo, or found any of these conversations valuable, feel free to chip in a few bucks to keep the joint running. If you can’t, no harm, no foul. We’re going to try and keep this operational as long as we can.

Thanks again for listening.