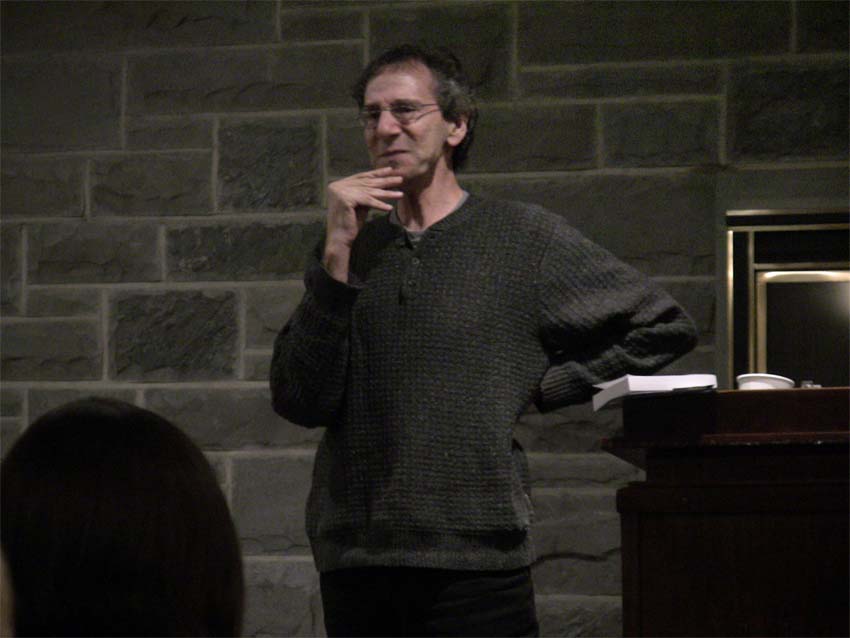 In this one hour radio interview, Steve Stern discusses how searching for Jewish heritage in the South led to an unexpected fiction career, Kafka’s “Above the Law,” and how to use Elvis Presley to get revenge.

Steve Stern is most recently the author of The Book of Mischief.

Condition of Mr. Segundo: Wondering why they’re playing the bagpipes.

Subjects Discussed: Playing bagpipes for the dead, the relationship between Jewish identity and the phantasmagorical in Stern’s fiction, growing up without Jewish identity, being an oral historian in Memphis, Beale Street culture, becoming an ethnic heritage director by accident, hippies and Jewish magic, learning about culture almost exclusively from books, finding moral heft within the fantastical, the pedestrian vs. the imagination, the human possibilities that arise from distinguishing between two worlds, paradoxical success, balancing present-day comic calamities vs. past heritage within The Frozen Rabbi, how the brain is affected by coffee, authors who suffer from impostor syndrome, Bernard Malamud’s “Man in the Drawer,” living in books more than living in life, misfits and outsiders defined by heritage, entering the zone of the collective dreamife by climbing a tree, juxtaposing human faith against religious faith through observation, the ambivalence of wanting to make connections and not being able to fit within a community, recurring disembodied characters within Stern’s stories, not writing for the drawer, dealing with a very limited reading audience, varying notions of “being an entertainer,” saturating a story with Yiddish words and ethnic identity and why the American fiction landscape is hostile to this, Stern’s fictional descriptions of The Pinch in Memphis, Stern being bitten by Tova Mirvis’s mother, comparisons between Steve Stern and Saul Bozoff in “The Wedding Jester,” Bozoff as Stern’s Zuckerman, being sued for a quarter million dollars because of mischievous fictional representation, the dark side of Steve Stern, getting vengeance through the use of Elvis Presley, “The Man Who Would Be Kafka,” how stories are vulnerable to interpretation, changing the rules vs. respecting folklore, legendary Jewish jesters, Kafka’s “Above the Law,” “Legend of the Lost,” pondering an existence without a soul or empathy, why Stern’s new stories are darker than the old ones, connecting with a spiritual dimension, and paradoxical parables.

Correspondent: We are outside a place that is playing bagpipes for someone who we believe is dead. Steve, how are you doing? You’re quite alive, I see.

Stern: Well, I’ve got one and a half feet in the grave with me.

Correspondent: (laughs) Who deals with the dead quite a bit. The Frozen Rabbi. Well, at least it’s frozen there. It seems to be the ultimate metaphor for this.

Stern: My characters tend not to stay dead.

Correspondent: Despite your best efforts. Well, let’s talk about some of the qualities of your work. One intriguing quality about your fiction is the way in which you have this idea of being Jewish aligned with these fantastical elements. In The Frozen Rabbi, you have this kid named Bernie. He’s constantly having to remind himself of his faith. Because he has this thawed out rabbi that he has to deal with, even as the rabbi becomes more craven and commercial as we learn more about his existence and we go back to the past. And then a story like “Avigdor of the Apes” sees its title character transform as he reads the secular, decidedly secular Edgar Rice Burroughs. You have “Lazar Malkin Enters Heaven,” which takes much of its influence from the story of the golem, as well as this premise of the stubborn father-in-law, who, like we’re talking about here, refuses to die. So I’m wondering. When you come up with a fantastical element for a story, are you thinking in terms of Jewish identity? Or does the Jewish identity tend to come along the more you think about the story? Or the more you tend to write about it? How important is it for that fantastical element to work on some moral or thematic level?

Stern: You want the long answer or the short answer?

Correspondent: Feel free to be as long-winded as you like on this program.

Stern: Well, the truth is that I grew up with virtually no Jewish identity. I was raised in a Reform synagogue in Memphis in the ’50s and ’60s, during a time when the Jews in the South were trying their best to be invisible. So Reform Judaism was a lot like Lutheranism, I think, in those days. The rabbi wore ecclesiastical robes. He had choirs and robes, a pipe organ, very little Hebrew in the liturgy. So I pretty much was confirmed, not bar mitzvahed, and then walked away from it virtually untouched by heritage or tradition.

Correspondent: What kind of reading of Jewishness did you do during this time?

Correspondent: Not even a scrap of the Torah here and there?

Stern: No. In fact, I wasn’t sure that the Torah and the Bible were the same thing. So, yeah, I was — if an orthodox anything, it was a hippie for years with the kind of counterculture life. Always was a reader. So I certainly read Bellow, Roth, and Malamud, and came, I think, to more traditional Jewish work — Yiddish books in translation — through a non-Yiddish writer, but Russian. Isaak Babel and his world of the Odessa ghetto was an easy segue into reading about the shtetl and Isaac Singer and becoming interested in Yiddish literature. But the truth is I was well into my thirties. And I’d come sort of full circle back to Memphis and kind of washed up there. Couldn’t find a job. Went to work for a folklore center, where I was transcribing oral history tapes of Beale Street and Beale Street characters. Black bluesmen and promoters. People who remember the heyday of Beale Street, which is fascinating to me. Because present day Memphis was a bit of a wasteland. And it turned out that there was this Jewish component on the street. The pawn shops, the dry goods dealers…

Correspondent: This would be Old Main Street then.

Stern: Well, Beale off of Main. And there was a kind of symbiosis between the black population and these Jewish merchants. And it was the first I’d heard of it really. Before my time. And I was fascinated.

Correspondent: Did you read a lot about the Jewish gangsters who crop up in a few stories here and in The Frozen Rabbi?

Stern: At this point, I’m pretty much tabula rasa. So they thought, “Well, he’s local. He works cheap. And he’s a Jew.” So they assigned me to do this. I became the Ethnic Heritage Director. I was suddenly elevated into researching the roots of the old Jewish community, which, again, I knew nothing about. It turned out that there had been an authentic East European ghetto community on North Main Street in Memphis, which was the other end of town. So I went about with a big Nagra tape recorder, knocking on doors and finding old folks who’d grown up in this neighborhood.

Correspondent: You were a one man Federal Writers Project.

Stern: Yeah. In a way. And working on a grant. And hurrying, trying to gather information before the grant ran out. And it turned out that the stories were fascinating. And I’d say, “Well, how did he get here?” So they generally begin in the old country and then bring their tradition with them and the tradition involved a lot of lore. Aside from the religion itself and the culture. There was a literature attached. There was a folklore attached. There were 1,000 years of just traditional stuff that I knew nothing about. So I fell into that world, kind of like down a rabbit hole, and thought, “Wow, here’s a place I can set my stories,” which had been kind of homeless before. And here’s a culture. You know, I grew up in the South. My friends were all in the tradition of Faulkner and Flannery O’Connor, Eudora Welty. I love those writers. But it was not a tradition that I could ever connect with. And I thought…

Correspondent: You needed a heritage then. And this came out of the blue. Were you trying to write fiction before this?

Stern: I’d been writing fiction for years. For a decade.

Correspondent: And it just didn’t hit until you had that folklore element.

Stern: Well, I had this wonderful day when I had a novel and a book of stories that were just kind of traveling around New York. And the agent called to say, “Well, you know, I’ve just had another rejection of your books. And the truth is I’m not very enthused either.”

Correspondent: (laughs) Jeez. Why did this agent take you on?

Stern: Three minutes later, I get a phone call from the schools that I’d been adjuncting at, saying, “Enrollment’s down and your presence will not be required.” So I was desperate.

Correspondent: So all doors shut on you at the same time.

Stern: Yeah. And to be honest, I think in redacting my life, you look for a way to find elements or events that spell destiny. So the folklore center and the discovery of the Pinch has that kind of feel for me. But on the other hand, I’m romanticizing and twisting the facts in a way to make it seem like a good story.

Correspondent: We’ve strayed quite a bit from my initial inquiry.

Correspondent: Which is totally fine. Because I like this answer.

Stern: Coming back to it!

Correspondent: Coming soon! So how do we get from folklore to fantastical elements? That’s the question.

Stern: Well, because in beginning to explore this heretofore unexplored heritage, I began to discover a thing that I had never known about Jewish tradition. And that’s that it has this incredibly rich, incredibly vast, diverse folklore that includes all kinds of magic.

Correspondent: Was the magic — that was a big element for why it hit for you? Why you could connect to it?

Correspondent: It was either that or getting stoned all day. (laughs)

Stern: Well, that too. But I’d been led to believe that the tradition that I grew up in was as completely dry as dust. Sterile, antiseptic. And it was as if I had stolen into the attic of this old Methodist synagogue and discovered, whoa! Here’s a dybbuk. (laughs) You know, a possessing demon. Here’s a golem. A Jewish Frankenstein. Here’s a wandering soul. A fallen angel. All this.

Correspondent: So did you know anything of shuls or Shabos or wedding canopies or breaking the glass? Anything along those lines? Because your fiction is obviously very Jewish. Was most of that informed by all this folklore that you were soaking up during this time of discovery here?

Stern: No. Because of what I’ve written, I’ve been mistaken for a Jew these many years.