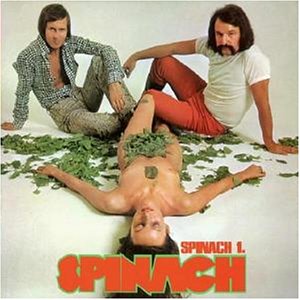 A remarkably thorough list of album covers with nudity.

Strangely, there appears no sign of Unfinished Music No. 1: Two Virgins. (Correction: found here.) But there are some odd design concepts here — even a daring group called Women of the SS.

I’m not sure who came up with the conceptual cover on the right or why the manager or publicity person figured that raw spinach carefully arranged on a woman’s body would somehow make these guys cool. But it was 1973 and people had a lot of ideas back then.

The only trace of Spinach I that I can find is here:

Bubblegum/rock project of Giorgio Moroder and Michael Holm from 1973 and only originally released in Japan. This is the first time this album has been available on CD and has been fully remastered with informative sleevenotes and an introduction by Michael Holm.