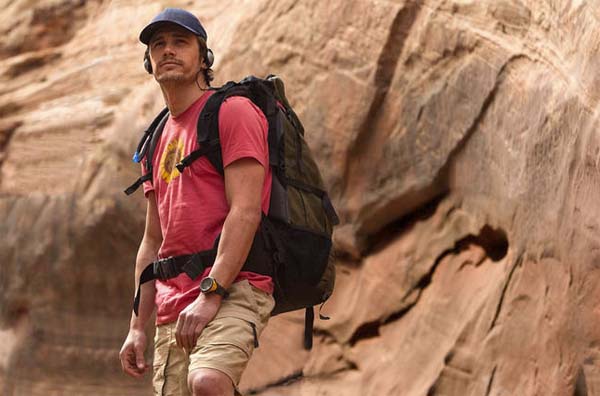 I’m relieved to report that 127 Hours, a very pleasant movie about mountain climber Aron Ralston quite literally giving up his right arm, cuts straight to the point.

I’m relieved to report that 127 Hours, a very pleasant movie about mountain climber Aron Ralston quite literally giving up his right arm, cuts straight to the point. The early moments see director Danny Boyle slashing the screen, De Palma-style, into three partitions. Our introduction to Ralston (played by James Franco) involves a spastic man fumbling about for his Swiss Army knife (with the camera staying inside Ralston’s cabinets, much as it will later inhabit the inside of Ralston’s water bottle, where we will see the inside of James Franco’s throat, which is quite possibly an image that is more disturbing than the bloody hackwork to come), surreal shots of cyclists shooting past Ralston’s car in the dead of night, and James Franco leaping across canyons like some video game character unaware of real world physics.

At the risk of shortening my flourishes, Danny Boyle’s latest movie is a cut above Sean Penn’s Into the Wild – in part because, unlike Penn, Boyle has a rapier wit. He stabs at the regrettable inconvenience of getting one’s arm caught by a boulder from several points, approaching it as a laughably common Gordian knot, a psychotropic experience, and a wounding nightmare. But these methodical slashes into the predicament also inspire astonishing momentum. Like David O. Russell’s Three Kings, Boyle’s camera enter the very body itself. Like the final moments of Darren Aronofsky’s Pi, Boyle blurs out the soundtrack with distorted tones as Ralston has the nerve to feel his nerves as he saws away to the bitter end. I can also report that Boyle even has the balls to quietly broach the subject of how Ralston will jerk off without his dependable right palm. But I don’t want to give Boyle’s hand away here.

It helps that James Franco has the chops for the part, imbuing his Ralston with a crazy edge. This lacerating insanity comes in handy when Ralston slices through the last of his rational equanimity, concocting a radio show (with a laugh track added to the film) to pass the time when he’s not guzzling down his own piss. But it also slays at the truth: Ralston is a solitary man. (“You’re going to be so lonely,” says a prophetic ex-girlfriend as Ralston relives a lost relationship from the comfort of a shitty situation.) Our hero has driven himself to his sticky predicament because he didn’t bother to tell anyone where he was going. That has to hurt. And even though we know that Ralston will be saved in the nick of time, Franco arms his performance with enough ambiguity so that we wonder what torments are stabbing away inside, when we aren’t subjected to intriguing hallucinations of family and friends watching the proceedings unfold from a comfortable couch (much like the audience!).

One never feels strongarmed by this approach, although some audiences have reportedly fainted because they expected a shot of morphine or something. They are wrong. For Boyle has plenty of tricks up his sleeve. A raven always flies over the cliff at the early morning hour. For a brief period, even Scooby-Doo serves as an way to greet the possibilities of living with open arms.

I was almost determined to cut my losses just before the blood spurted, but, thankfully, the moment is almost anticlimactic when it arrives. I appreciated the way in which Boyle had caught me redhanded in my anticipation.

The upshot is that this is a bloody good movie – a handy reminder of the creature comforts we take for granted. Should I ever lose my hand, like Ralston, I’ll stay a betting man in the great game of life.