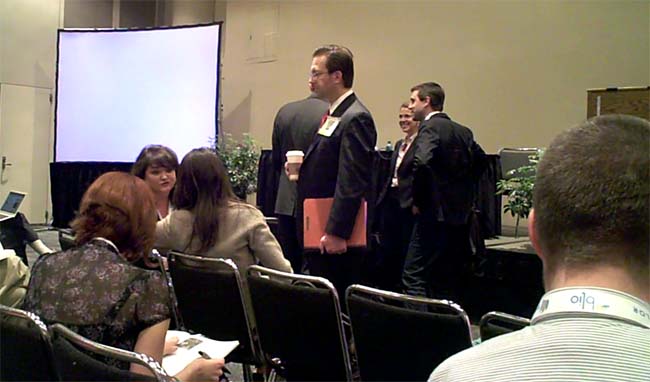 When five big executives come together to discuss the future of ebooks, have they truly considered the customer?

If you were an industry type giving a half goddam about the future of publishing on a late Tuesday afternoon in New York, you had two venues at BEA to deposit your worries. If you were a squeaky kidult wishing to rah rah rah rather than stare into hard reality, there was the 7x20x21 series of self-congrulatory dispatches competing with the floor’s mad transactional noise. But if you were an adult and if you understood why the maxim “follow the money” is not one to blithely ignore, then you headed downstairs into a spacious room, where corporate executives discussed the future of ebooks.

It was a packed house attracting no specific type. Italians chatted behind me. There were guys in the back finding ideal standing positions to make a quick escape if the panel went bust. But nearly every seat was filled through the end. I suppose that when you promise an audience some glimpse of the future, it’s a guaranteed draw. Except for the young people too busy with the collective adulation upstairs.

“The book business is a very long tail business,” began moderator Tom Turvey. I knew he was with Google even before he even said “long tail.” For not more than a minute before heading to the lectern, he checked his phone: one final hit from the electronic communications crack pipe.

As one of the Google People, Turvey had the nerdy nihilism you’d expect from a director of strategic partnerships. He was careful not to express too much enthusiasm, but he did seem to relish the idea of print being as dead as the gramophone, especially midway through the discussion when he asked three of the panelists (excluding Amanda Close) if the agency model was a feature or a bug. “Personally I think it’s a bug, not a feature,” replied O’Reilly’s Andrew Savikas. “It was a moment in time,” replied Bloomsbury’s Evan Schnittman. Perseus’s David Steinberger was the most practical of the four: “I would just say it’s too early. I think we’re overexcited about this issue.”

But Steinberger’s wise response didn’t stop Turvey from pushing further on the topic. Indeed, there is little doubt in my mind that the man spends many evenings in hotel rooms wiping the gushing drool from his chin after marinating his mind in some Bradbury-like vision of a world without books. (When asked by an audience member if Google was working on replicating the experience of a bookstore, Turvey replied, “We have some of our best engineers working on this very topic.” Never mind that the panel demonstrated that ebooks have created problems for consumers that these five corporate titans didn’t really wish to address.)

“Publishing does not know how to market ebooks yet,” said Schnittman. “You’re looking at bestsellers tracking with bestsellers. Everything that we’re marketing in the stores is selling just as well.” I became skeptical of Schnittman when he started clenching his left hand, a gesture reminding me of some dodgy villain from a melodrama. Schnittman liked to talk quite a bit.

“Let’s be honest with ourselves,” continued Schnittman. “We’ve never marketed backlist before.”

These rather assumptive generalizations had me wondering if Schnittman had ever settled his precious hands onto the raw joys of genre or contemplated the way in which an author winning an award often results in backlist titles being repackaged. And what about presses like the University of Chicago Press, finding new life for Anthony Powell and Richard Stark?

“The big challenge that we’re all facing is the digital world,” said David Steinberger. Steinberger was more interested in the way in which consumers discovered books. “Digital is very good for hunters and not so for gatherers.” These were metaphors that a male computer geek could understand, but when he presented specific data about the bottom 50% of Perseus’s titles earning 2% of the print revenue and 12% of the ebook revenue, these statistics helped steer the conversation away from Turvey’s regrettable Gladwellian terminology.

“Those books are not easily found in the physical world,” continued Steinberger. He brought up Dancing in the Glory of Monsters, which had very poor distribution, but managed to nab 62% in ebook revenue. The same went for Poor Economics: A Radical Rethinking of the Way to Fight Global Poverty. Not a sexy title for the Grisham crowd, but the book managed to secure 60% in ebook revenue. “I think you are seeing a lift in the tail,” said Steinberger. “If you’re publishing John Grisham or Tom Clancy, you have another set of rules.”

Random House’s Amanda Close didn’t close the deal upon her turn at the mike. Overly general in her answers and needlessly self-congratulatory in tone (though not haughty like Schnittman, of which more anon), Close wallowed in general corporatese. “I would argue that it’s early days in retail and that we are working with our partners every day to collaboratively work on that browsing experience. That discoverability is really coming through online to replace certain things.” But if Close admitted her desire to argue, it was all for naught. For she brought no argument to the table. “Things in the physical world can reiterate things in the digital world.” You can probably say this about getting lucky after a long dry spell downloading porn. “Our challenge is to deeply understand the dynamics of the marketplace.” Close’s challenge was to deeply understand that a panel of this ilk requires something a bit more than reductionist statements. From the perspective of this observer, she failed. It didn’t help that she smiled brightly and nodded her head after spouting off some of this malarkey.

“Digital distribution is extremely efficient at meeting demand,” offered Andrew Savikas. Yet he also conceded that much of the demand is due to consumers discovering the books. He was right to note the “popularity within the store which generates the feedback loop,” but he wasn’t willing to distinguish the differences between discoverability in a physical bookstore (accompanied by a skilled bookseller) and an e-bookstore. Perhaps it was because he preferred to hawk Safari Books, which has “both lengthened and fattened the tail.”

“While I do expect there to continue to be perhaps a need for the biggest players to focus on those hot titles,” continued Savikas, “I think this ecosystem offers an opportunity for smaller players to find a niche.”

But who are these smaller players? Safari Books? Authors who self-publish at the Kindle Store? Much as yesterday’s panel failed to establish terms, I kept wondering why a thoughtful if somewhat long-winded guy like Savikas couldn’t espouse the pragmatism offered by Steinberger. Savikas was holistic enough to consider Netflix’s current domination of bandwidth, but does this even apply to books, which are an entirely different medium requiring an entirely different commitment?

“I think everybody starts seeing the phenomenon where something hits the list and it becomes self-perpetuating, you know?” responded Close on a question relating to bestseller lists. “I actually look forward to the retail experience evolving so that we can see some segmentation.”

But how can you have an evolving retail experience when there’s a reluctance to experiment? Turvey questioned Close minutes later when he asked her, quite fairly, if Random House’s organizational attitude had changed in light of the fact that more self-published authors had entered the ebook arena.

“Um, you know the way I would actually answer that is we are always testing things with our new authors.” But how? “It’s not a phenomenon that has been driven by the self-publishing platform.” I’m guessing that Amanda Hocking would disagree with this.

Steinberger brought up Go the Fuck to Sleep as an example of online conversation translating into sales. He then quoted The Cluetrain Manifesto: “A market is not me telling you something. A market is a conversation.” But while it’s undeniable that some conversation has started with Go the Fuck to Sleep, nobody on the panel wanted to admit that this was a bit of a fluke. But it did cause Schnittman to reveal more than a bit of resentment towards the consumer.

“Consumers need help,” he said. “We throw at them how many thousands of books?” He then hunched forward. “What matters is there’s an authority. It’s the free market, baby.”

“I think people do use it,” huffed Schnittman, when Turvey brought up the failed Genius feature in iTunes. “You use it with a caveat that it sucks.”

Then he got a little defensive. “You in the world of algorithms, you’ll figure out something theoretically better and better.” He then suggested that “the tail was wagging the dog,” before attempting to retract this because he had “used it yesterday. Nobody quote me on that one.”

I kept wondering why this apparent professional was more concerned with l’esprit de l’escalier rather than legitimate ideas. But at least he wasn’t as bad as Close, who again declared her willingness to argue in lieu of a legitimate argument: “I would argue we have always cared deeply about our consumers.” But for Close, that care has more to do with “buzz meters” and point-of-sale data.

Schnitmann got very riled up about territorial sales, which has presented many ebook customers from accessing certain titles. “Where we see the Internet as a world that doesn’t respect any borders, we’ve actually set up the system to present consumes to buy.”

This caused Savikas to question the wisdom of such an approach: “The notion that we can or should enforce geographic restrictions on web-generated content is a lost cause. And I feel sorry for your customers.”

“I don’t have the rights to them though!” whimpered Schnittman.

Savikas elaborated on this, believing that electronic sales would eventually become the primary way of doing business and that territorial restrictions don’t reflect the fabric of the Web. Schnittman countered, with more Palpatine-like hand cluthing gestures, by suggesting that “different economies have different needs.” Savikas replied, “I don’t think there’s anything wrong in adjusting the pricing geographically.”

Territorial copyright is certainly an issue. But when a woman approached the mike and declared herself a “frustrated customer,” explaining quite pasionately to Schnittman, “I don’t think that you’re respecting the consumer at all,” it became clear that the panel didn’t want to discuss the real issue: the customer is always right. “Do you have a question?” sneered Turvey from the podium. “Why don’t you think more about the consumer?” said the woman, not missing a beat.

Schnittman did not offer an answer. Nor did any of the other four. And their silence spoke volumes about their collective comprehension of business-customer relations.