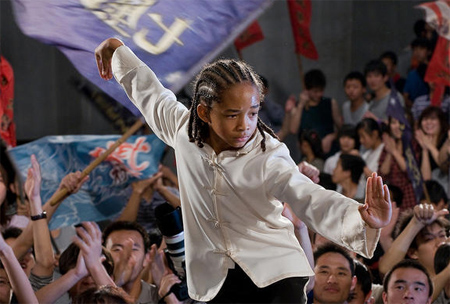 Age has always been a dicey variable in the Karate Kid universe. In The Karate Kid, Part III — perhaps the most preposterous entry in the series — the 28-year-old Ralph Macchio passed himself off as a “kid” abandoning college, with his character dating the 17-year-old Robyn Lively (thus lending a creepy and statutory quality to the relationship). One of Daniel-San’s adversaries was the 27-year-old Thomas Ian Griffith, a scenery-chewing babyface who tried to pass himself off as a military man who served in ‘Nam with the 43-year-old Martin Kove. Meanwhile, the 57-year-old Pat Morita claimed battle experience for a war that went down when Morita was a preteen.

But these mathematical discrepancies are harmless solecisms when compared to the remake’s shaky moral framework. This time around, the “kid” is truly a kid — even if the “karate” is kung fu and not karate. (I must assume that Hollywood’s rule for any Karate Kid film is to get just one of the two right.) The martial arts here, a watered-down take on Yuen Woo-ping, are both hilarious and disturbing. Here is a film that asks us to celebrate Jaden Smith beating another 12-year-old in the face — a move that would surely have disqualified him from the 1984 original’s All Valley Karate Tournament — shortly after he has pinned his opponent on the mat. The remake’s aggressive sound mix invites us to revel in the bone-crunching prospects of children being thrown into the air and viciously attacked, demonstrating that America’s post-Guantanamo moral laxity has expanded considerably since Jack Bauer first waterboarded a suspect. And I’ll certainly be curious if some family values moralist emerges from the log cabin to condemn the film’s fondness for having kids beating the shit out of each other.

Here is a remake that imbues ridiculous infographics into the tournament finale, where digitized avatars of the participants rotate like some Ritalin-happy bastard progeny conceived between Mortal Kombat* and FOX News, and every round’s most violent moment is replayed for the crowd. This is all quite amusing, but it’s worth pointing out that John G. Avildsen only needed ringside cutaways, medium shots of the fighting, and Joe Esposito’s silly song, “You’re the Best” to generate suspense. (Watch that linked clip and you’ll see that Avildsen, who co-edited the movie, was smart enough to avoid long shots of the crowd. He photographed the tournament more as a vicarious experience. And because Robert Mark Kamen’s script was smart enough to layer Daniel’s predicament with serious stakes, we were very much invested in the outcome. It became surprisingly easy to forget that The Karate Kid was a film directed by the same guy who helmed Rocky.) The remake, by contrast, is more concerned with making the arena loud and large, rather than giving us ringside seats for a conflict that we hope will end all the needless violence.

Director Harald Zwart feels more compelled to give us spectacle with this remake. He scores some points with the supporting cast. If Jackie Chan’s Mr. Han can’t hold a thespic candle to the Oscar-nominated Pat Morita, Taraji P. Henson’s single mother is good enough to match Randee Heller in the original. (Heller was drawn to California for a computer job. But here’s one unsettling aspect of the remake. It’s intimated that Henson’s character, who has moved to China from Detroit and works in an “auto factory,” is a manager at some plant paying Chinese workers a pittance. I can only speak for myself, but the film’s inadequacies might best be expressed by the fact that I found myself far more troubled by this narrative aspect than anything that Jaden Smith was going through.) Even better is newcomer Wenwen Han as Meiying, Jaden Smith’s love interest, who displays a strong talent for expressing contained emotions, even if the material doesn’t give her the opportunity to slug a caddish boy in the face. (I feel compelled to point out that Lady Gaga’s “Pokerface” replaces Bananarama’s “Cruel Summer” for the film’s Golf N’ Stuff-like moment. This is an acceptable choice, but a DDR-like machine is hardly a substitute for a hockey machine’s conversational possibilities.) Zwart has a decent cinematographer (Roger Pratt) rigging some impressive Fincheresque dissolves between several shots using the same computer-controlled camera motion and opting for a more handheld feel for the coverage. Zwart is also sensible enough to hire a composer (James Horner) who is just as overblown (if not more so) than the original film’s composer (Bill Conti).

The problem here isn’t Zwart’s direction, but Christopher Murphey’s workmanlike script. While Murphey offers a few new spins on Miyagi’s “wax on wax off” training techniques and skillfully transposes many of the original film’s scenes (and even a good deal of the dialogue) into the new China setting, Jaden Smith’s Dre Parker isn’t nearly as winning as Daniel Larusso. Where Daniel was a decent kid from New Jersey who immediately introduced himself to a crazy old woman in the apartment building and brought her dog a bowl of water, immediately securing audience sympathy, Dre is more of a spoiled brat who drops his jacket on the floor, whines too much, and doesn’t even have Daniel’s soccer ball bouncing moves to impress the girl. (Instead, Dre, after attempting a vicious top spin move in a ping-pong match, gets his ass handed to him by an old man.) It also doesn’t help that Jaden Smith has an annoying habit of mugging for the camera. He rolls his eyes and folds his face to the spectator instead of inhabiting his character the way that Macchio did. Perhaps the charm Smith offered in The Pursuit of Happyness was less rooted in acting and more associated with being in close proximity to his real-life father. Whatever the case, in all my years, I never thought I would ever write the next sentence. I actually longed for Ralph Macchio.

Because of this, even though it’s more entertaining than most remakes, 2010’s The Karate Kid can’t come close to matching the original. And that’s because the 1984 movie was something of a masterpiece. Aside from the original’s clever method of using the Protestant work ethic as a pretext for “training” (one might make a case that Daniel’s dawn-to-dusk shifts are one of Hollywood’s greatest portrayals of efficacious slave labor), the movie was a sneaky parable about cultural appropriation. Kreese (the Martin Kove character), the military man turned dojo master, and the Cobra clan, with its Erhardian “No Fear! No Mercy!” mantra, not only presented us with a shameful bastardization of karate’s peaceful roots, but it certainly helped that Kreese, Johnny, and the various lieutenants acted like a cokehead asshole brigade. Miyagi lost his wife and daughter for reasons that involved a Japanese internment camp — one of the most disgraceful moments in American history. And the class divide between Daniel and “Ali with an I,” when taken with the feminism of Ali pursuing Daniel (rather than the reverse) and clocking the boorish Johnny, created an environment where hard work and a commitment to discipline could pull you through the American nightmare. Sure, these were Protestant values. But it did the trick for mainstream audiences.

But the remake has done away with most of this. Like Miyagi, Han has lost his wife and daughter. But it’s not rooted in historical precedent, and the scene is played out with Chan sobbing with overwrought tears. Avildsen was right to portray the moment in one long take, not have Miyagi break down, and center the scene around Daniel’s discovery. But in the remake, Dre exists to comfort Han. And the film itself exists to comfort the audience, who will instantly forget it.

All this is too bad. Because had the remake’s script considered the original film’s underlying principle — that resorting to violence is only applicable when there are no other choices — it might have packed a greater punch.

* — Maybe some reader can confirm this. This review has become much longer than I anticipated and I’m too lazy to look it up. But I understand that the first cultural usage of “Finish him!” originated in the 1984 version of The Karate Kid. Mortal Kombat then appropriated this phrase. And, sure enough, the phrase has returned to the 2010 remake. So the Mortal Kombat infographics do make a certain amount of sense. The only real surprise is that nobody thought to include this in 1994’s The Next Karate Kid, which appeared in theaters two years after Mortal Kombat enticed kids in video arcades.