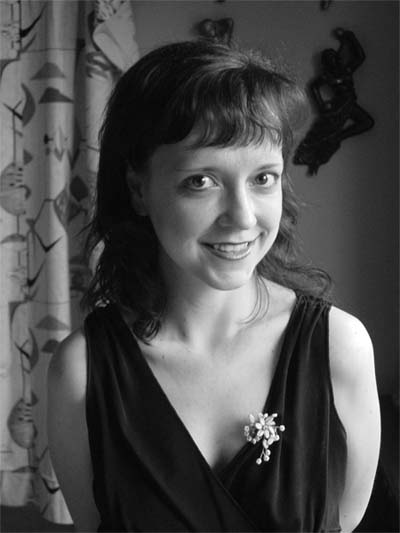 In this one hour radio interview, we talk with Megan Abbott about The End of Everything, crime fiction, childhood paper games, psychoanalysis, strangers having sex in motel rooms, and much more!

Megan Abbott appeared on The Bat Segundo Show #404. She is most recently the author of The End of Everything. For more on Megan Abbott, you can read Edward Champion’s essay “Megan Abbott: Literary Criminal” at The Millions,

Subjects Discussed: The need for dramatic emphasis, basing novels on real life crimes, having a preexisting narrative framework when working on fiction, mysterious PBS documentaries about missing girls, blurring criminal details to create tangible fiction, writing in locations that you don’t live in, special corners of the brain, the advantages of maintaining a blinkered perspective, Raymond Chandler, the perils of critically assessing a writer you love, James Ellroy, Daniel Woodrell’s methods of shattering language, maintaining a rhythmic balance in sentences, writers who only have one story to tell, Paul Schrader, agonizing over repeat metaphors, fanned out objects, “doomy” vs. “do me,” deploying the words “fulsome” and “candescent,” James M. Cain, using similes after five novels, Chandler’s similes, being unafraid of influence, having a hyperbolic head, working with editors (Denise Roy vs. Reagan Arthur), severe line editing, Raymond Carver and Gordon Lish (Lish’s edit of “Beginners”), stylistic repetition within sentences, breaking out of certain ruts, the difficulties of including a drunken nightclub scene in a novel about a thirteen-year-old girl, fornication within novels, pinpointing the precise moment that the police show up in a Megan Abbott novel, contemplating a pre-Amber Alert era, shame and guilt, the phrase “the end of everything” contained in Die a Little, FLAME, MASH, and childhood folded paper games, girls who are “body-close,” building a foundation to find a bridge to the end, Bury Me Deep and William Kennedy’s Ironweed, reviving twenty pages from years before, psychoanalytical connections with the American novel, using Freud to balance judgmental behavior within a novel, Stewart O’Nan, Alice Sebold, when missing girl novels are pegged as crime fiction, struggling with the absence of plot, The Girl with the Dragon Tattoo, literary fiction cannibalizing from genre, Colson Whitehead’s Zone One, John Banville/Benjamin Black, dismissal of genre from literary practitioners and marketplace conditions, Donald E. Westlake/Richard Stark, Martin Amis’s Night Train, John Updike’s external sexual imagery, Lionel Shriver’s The Post-Birthday World, the relationship between sex and observational judgment in Abbott’s fiction, nonjudgmental sexual moments in life and in fiction, strangers who have sex in motel rooms, why peach is the best hue to describe porn, discovering body objectification as a kid, authenticity with real and fictitious places, David Lynch and rabbits, kimonos and forelocks as essential elements to a Megan Abbott novel, film imagery vs. tangible human experience, In a Lonely Place, fixing up a room to match the look of a room you’re writing about, nostalgia and site-specific memory, and direct transposition from reality.

Correspondent: Missing girl novels are really interesting to me. Because you have people like Stewart O’Nan and Alice Sebold, who have written these missing girl novels and yet they don’t have to face the dilemma of being pegged a “crime novelist” or a “mystery novelist” or a “noir novelist.” Why do you think O’Nan and Sebold are able to get away with this and you aren’t? I mean, obviously you’ve written noir. But what of this? I was thinking to myself, “Well, can you really call her books ‘mystery novels’ or ‘crime novels?'” I was talking with people about this. And I said, “You know, really, it doesn’t matter. It’s fiction. And fiction should work.” So how do you deal with something like this?

Abbott: You know, I’m always so mystified by that too. Because I think — talking about The Lovely Bones and what people may call the “missing girl novel,” but they’re certainly not calling it a crime novel — it sort of stupefies me. And all those designations do. Because stories are stories. Especially missing people stories. They’re really about identity. They’re really about these big issues that, in many ways, all novels are really about. The missing or the gone, and how we attach these labels. On the other hand, as a lover of crime novels, I feel okay with that too. It doesn’t bother me. But I guess there’s this fear. The fear I always have in this case. People always say this about crime novels and they won’t say this about literary novels, but they should. Which is: “Oh no. Not another missing kid book.” Or “Oh no. Not another heist novel.” Or a PI novel. And that’s just because they’ve read some that don’t sing for them. But I think that with literary fiction, you can get away with that more. I mean, someone perhaps should say, “Not another novel about a crumbling East Side marriage.” But nobody seems to! No one would say that. Because they’ll say that’s the stuff of life. Well, you know, crime is the stuff of life too.

Correspondent: Or: “Not another novel about a middle-aged man going through a crisis.”

Abbott: That’s the one I was trying to think of. (laughs)

Correspondent: That’s the thing. I mean…

Abbott: Who’s going to fall for the younger woman. (laughs)

Correspondent: (laughs) Even worse. Yes, I know! Why don’t we peg those as genre and the crime novels, which have a little more variety…

Correspondent: Maybe the solution here is to just win them over with prose. If you have original enough prose, do you think that you can escape the label? Or maybe there’s a certain advantage in being locked within that label. Because you don’t have to deal with the bullshit.

Abbott: You’d think that. You know what I mean/ I guess the sort of dream is that you’d have a book that would work in both ways. That’s one of the things. I struggle with plot. It’s not my natural thing. But I love plot as a reader. And I’m a big literary fiction reader. But often the struggle I have with them is the absence of plot. It just seems like the ideal situation are those books. And I think the Sebold is one of those, where you’re able to merge the strength of a genre book’s plot with all the originality and the innovation that you can get away with more in literary fiction than you could in a crime novel. Though I think you can. Most crime readers are totally open. Because they read so much. And obviously they don’t care that much about plot. Or they wouldn’t be reading The Girl with the Dragon Tattoo! (laughs)

Correspondent: Sure. But we’re also seeing literary fiction cannibalizing more from genre, I think, in the last five to ten years.

Correspondent: I mean, Colson Whitehead. His new book is a zombie book.

Abbott: I hear that!

Correspondent: Why isn’t that categorized in the science fiction section?

Abbott: Richard Price. It’s somewhat puzzling. Who’s the new one who’s doing it? There’s another one. I keep hearing of all these literary authors writing their crime novels. And I’m sure they’re doing it for a variety of reasons. And I don’t blame them for doing it. But what frustrates me sometimes is the reception they get, which is…

Correspondent: They get a free pass because they’re the literary person dipping into genre.

Correspondent: You, by way of being the experienced genre novelist, get more criticism.

Correspondent: Do you feel that this is what the situation is with you?

Abbott: I don’t know. I mean, I guess we’ll see. I feel that my books are part of the same world. And I think a lot of these turns are sort of imposed by outside…

Abbott: Right. So I think that’s okay. My greatest frustration is the John Banville thing, where it takes him three days to write a paragraph under his name. But when he writes under Benjamin Black, it takes him five minutes to write. Like that kind of dismissal of genre.

Abbott: Yes. And I think that’s the place I’m excited about. When it comes from a love. When you can feel an author’s love. When they’re not being arch. A lot of people gave Martin Amis a hard time when he came out with Night Train. Which I thought was great! Because you could tell. He was not being pastiche or arch.

Correspondent: No ambitions whatsoever. He just wanted to write a mystery novel.

Abbott: Exactly. And it’s beautiful. He didn’t hold back on his prose. He did exactly what he wanted to do. And when books come from a place of love, they always work.

Correspondent: I also feel that Paul Auster has faced that problem too. Because he’s writing very ornate mystery novels to some degree.

Abbott: Right. You think of Ellroy and DeLillo. How are they that different?

Correspondent: Yeah. They’re both confronting the major events of the 20th century.