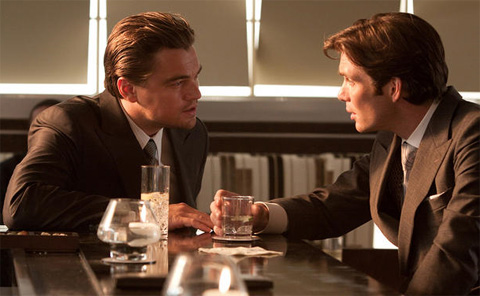 Inception is reliant on perfunctory globetrotting, lights dangling atop ceilings, and repetitive amber hues for its “look.” It does contain an admittedly intricate plot structure, which cannot be immediately discounted. But when a film feels as dead as a greedy investment banker’s onyx soul, one isn’t exactly enlivened to clap.

A good filmmaker doesn’t need to be invitational, but it certainly doesn’t hurt. But if an auteur can’t inveigle an audience, if he doesn’t have a basic understanding of showmanship, then the least he can offer is a distinctive voice. Alas, Christopher Nolan offers neither quality with Inception — a hopelessly unimaginative film that has been overly esteemed by many. Inception is reliant on perfunctory globetrotting, lights dangling atop ceilings, and repetitive amber hues for its “look.” It does contain an admittedly intricate plot structure, which cannot be immediately discounted. But when a film feels as dead as a greedy investment banker’s onyx soul, one isn’t exactly enlivened to clap. In fact, nearly all of the characters resemble Goldman Sachs employees hungrily hording your tax dollars: slicked back hair, lifeless eyes, and needlessly expensive suits. It can’t be an accident that the dollar amount of an expensive wallet is mentioned several times, or that the reason this group is invading a man’s head concerns some cartoonish explanation of the global energy market. In other words, this is a film with a childish understanding of our world; a Tinkertoy assemblage you’d gladly celebrate if it were handed to you by a five-year-old, but not from the 39-year-old man who has made Insomnia, Memento, Following, The Prestige, and two passable Batman movies.

It is truly a sad sign of American cultural decline that the rich now exist to be worshiped rather than depicted with anything approaching dimension. Inception‘s emphasis hardly inspires an everyman identification point, much less audience sympathy. Here is a cinematic opportunity to explore the dream state — to plunge into the depths explored by David Lynch, Guy Maddin, Terry Gilliam, Ken Russell, Jean-Pierre Jeunet, and countless other cinematic fantasists still alive and working today. Nolan has been given a $160 million budget to get a mass audience to confront its deepest visceral fantasies, but, with Inception, the collected reveries resemble a pedestrian heist movie. It would be one thing if Nolan possessed the theatricality of someone like Arch Orboler, the wackiness of Dan O’Bannon, or the outré singularity of Italo Calvino, but his derivative vision of snowbound fortresses invaded by machine-gunning skiers or decaying seaside cities is divested of such punch or possibilities.

Consciousness should resemble something more than a bad pulp novel. In Inception, you won’t find phantasmagorical creatures or perverse sexual encounters. You won’t find a dream that is truly dangerous. For this is a movie that has been rated PG-13 — a rating explicitly designed to prohibit human truth from the multiplexes. But you will find plenty of mindless gunfights and tedious slow-motion images of a van falling off a bridge, along with the fine comic actor Joseph Gordon-Levitt underused as a guy floating around zero gravity collecting twined bodies into an elevator. (Why the repeat images? Well, the film’s final few reels take place in three, later four, separate levels of the dreamworld, with each level operating on a different unit of time. What passes during seconds in the top level will be weeks on the second level and months on the third level. This permits dreams within dreams within dreams. It’s a clever hook, but Nolan overplays his hand by treating his audience like a bunch of unthinking baboons who can’t remember the club sandwich atmosphere even after the fifteenth series of cutaway shots.)

It’s never a wise idea to name a protagonist after a salad, but our man Cobb (Leonardo DiCaprio) is a flinty expert at invading people’s consciousnesses. He carries the mental detritus of his dead wife, storehousing these memories in various levels of his mind and unable to control these stray elements from invading a dreamscape. And while there’s a certain appeal in seeing an old school elevator traveling between internal cerebral levels, there’s simply no emotional impact with a foot-crunched wineglass or a totemic top. Nolan introduces numerous projections of the subconscious — figures who detect when the mind is being invaded and start attacking intruders like white blood cells. But Nolan is crass and careless with his semiotics. The symbols serve merely to demonstrate that Nolan is the guy driving the car, rather than presenting us with any real insight into trauma.

Recruited by a rich man named Saito (Ken Watanabe) to plant a motivation inside a corporate heir’s mind, Cobb assembles a predominantly male group of operatives, with the token female played by Ellen Page — a precocious student who seems capable of grand conceptual innovation, but who spends most of the film staring doelike at DiCaprio or offering banal responses to “surprise” twists.

The film fills every spare moment with so much expository chatter that we never get a chance to marvel at the world Nolan’s setting up. Cobb and his cronies are never permitted a moment to breathe. Nolan doesn’t seem to understand that film is a visual form, not a chatty medium. He’s taken the same minimalist approach that he offered with his two Batman movies — neuter the images with austerity so that they feel “real,” but don’t bother to layer the mise en scène with elements that capture our imagination. And even then, the dialogue is so crummy, so indicative of a man who read a slim Baudelaire volume over the weekend and thought himself a philosophical giant, that it’s hardly worth dredging up. We get bad pulp ultimatums (“Do you want to take a leap of faith or become an old man living with regret willing to die alone?”), laughably specific training lessons (“You have two minutes to design a maze that it takes one minute to solve”), and vapid declarations of life experience (“Do you know what it is to be a lover?”). Even poor DiCaprio, who delivers a fairly lively performance under the circumstances, is directed to talk like a two-packs-a-day Batman near the end, barking “I feel guilt” in one of the film’s many phony emotional revelations.

Taken with the film’s limited worldview, a place where people exist solely to betray each other, there is little excitement here in relation to the human spirit. Indeed, the “cognitively dissonant milkshake of rage, fear, and, finally, absolving confusion” that Jonathan Lethem identified within The Dark Knight is more applicable to Inception. The film feels like some feral holdover from the Bush Administration. It’s a love letter to conservatism, a chapbook steeped in cruelty and duplicity, where the only real evolution comes with how well you can screw over your partner.

One feels needlessly bullied by this movie. Nolan is so keen to show off how clever he is that the film’s internal workings are more adorned than felt. It’s as if Nolan is some obnoxious conversationalist at a cocktail party who can’t take the hint that he’s hardly the smart charmer he thinks he is. Unfortunately, because cinema is a passive experience, you can’t pour the punch bowl over the smug man’s head.

While I suspect the film’s numerous defenders will point to the fact that the dreamworld here is flat because most of Inception takes place inside a privileged man’s head, I must point to Mary Harron’s American Psycho, Kubrick’s needlessly condemned Eyes Wide Shut, and even Cameron Crowe’s flawed Vanilla Sky as examples of dormant and often dangerous desires explored in contemporary cinema. These filmmakers understood that even the most comfortable members of society can be driven to, respectively, homicidal rage, restricted perversion, and self-evisceration in their dreams. No such luck with Inception. We’re promised Limbo, a mental sublevel so intense that the dreamer eventually returns to the real world as a mental vegetable. One imagines Bosch landscapes or truly terrifying images. But what do we get? Some tame universe that looks like it was whipped up in UDK over a few days by some bored kid.

So this film will dazzle any dummy unfamiliar with Bergman or Bunuel. It will entice any viewer who has set the fantasy bar quite low. It will make a good deal of money. And there’s little that anyone can say to dissuade the inevitable march of capitalist progress. But the hyperbolic comparisons of Nolan with Kubrick are foolhardy. There used to be a time in which we didn’t compare a common pickpocket dressed in a flashy suit with a criminal mastermind who had the decency to respect the mark. But in a post-BP, post-bailout age, it comes as no surprise that our affluent cultural thugs would be declared the new Jesii by lifeless critics who are too diffident and too easily seduced by a shiny bauble. Ain’t that a kick?