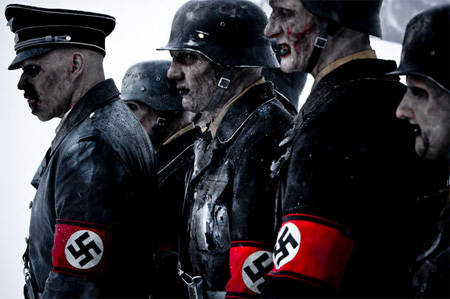 Earlier this year, numerous enthusiasts exploded in their pants over a movie that had not yet snagged American distribution. If you were among the throbbing throng to take in the trailer — yet another eyeball-attracting rite encouraged by the Internet’s discouragement of cultural apostasy — you may very well have shouted, “HOLY SHIT! NAZI ZOMBIES! WELL, PINCH MY EARS AND CALL ME A JELLY DONUT! I MUST SEE THIS MOVIE! I MEAN, IT EVEN HAS FUCKING SUBTITLES!” It was the geek equivalent of a thirteen-year-old boy wrestling with a nervous urge to jump any girl in the room, settling instead for the Oui centerfold that some trucker had left behind in a public restroom.

In hindsight, it was probably the subtitles that seduced us. Subtitles, on the whole, suggest rueful miscommunication or a strangeness extant only because we don’t speak the language. And with subtitles applied to a high concept like undead Einsatzgruppen, we conveniently forget the trash cinema innovators who came before. Tommy Wirkola’s Dead Snow is not the first movie to feature Nazi zombies. There was 1977’s Shock Waves, which featured Peter Cushing as a Nazi scientist hoarding SS zombies on a boat. Before that, there was 1966’s The Frozen Dead, which involved Dana Andrews holding onto the heads of Nazi war criminals alive to attach upon ripe bodies for a new Third Reich. (I find it someone surprising that Dana Andrews, a white bread actor who had all the appeal of stale toast, was one of the involved parties. This is a bit like expecting Tom Hanks to be the first Hollywood actor to penetrate an orifice in a Hollywood film.)

While filmmaker Tommy Wirkola includes literal and visual nods to the first two Evil Dead films, April Fool’s Day, Star Wars, Indiana Jones and the Temple of Doom, Braindead (aka Dead Alive), and The Simpsons, don’t let these flagrant pop cultural references fool you. Wirkola has robbed from the mausoleum of horror movies that passed on in 1981: Jean Rollin’s Zombie Lake (undead Nazis assaulting isolated setting, emerging here from the snow instead of a lake) and Jess Franco’s Oasis of the Zombies (army of Nazi zombies guarding gold).

Which is not to say that Dead Snow is bad. While the zombies arrive much later than they probably should and the early character development doesn’t quite compensate for the reduced early gore, there is ample intestine ripping and even a few funny lines. “We should have gone to the beach like I told you,” says someone just after the kids start dying. This time, the kids who meet Muhammad at the mountain cabin are medical students — a smart creative decision permitting the characters to take on death and hack off limbs without flinching or freezing up. (One character even stitches up his own neck.) There’s great potential in having more educated youngsters stand in for the usual libertine losers. Alas, the interesting early chatter of how to use spit to escape an avalanche subsides to the accustomed lackluster scenarios.

This is a movie that knows it’s a retread — a dependable retread, but a retread nonetheless. The kid dusting off the mountain cabin kitchen at the beginning could very well be Wirkola himself. The cabin resembles the Evil Dead cabin. Wirkola even mimics Sam Raimi’s chainsaw montage from Evil Dead II (minus the “Groovy”). And it’s often quite frustrating that these characters are developed through Hollywood references instead of human behavior. One wonders if Wirkola even understands young people. These kids actually complain about playing co-ed Twister, failing to consider the libidinous possibilities. Why play Twister? “Because Hollywood told us that it’s so much fun.” But is that line an actual joke or contempt? The movie’s token film geek, Erlend, wears a Braindead t-shirt throughout and is commanded by his peers to stop talking about movies for an hour. But at least he gets lucky in an outhouse. The Seth Rogen archetype has made its way to Norway.

Here is a movie that’s skillful enough to have someone dangling over a cliff with an intestine serving as a rope, but that doesn’t have the instincts to make any of its characters Jewish. (And wouldn’t that present some interesting conflict?) Yes, we do briefly see the remnants of a Nazi lair. And the Nazi zombie leader (named Herzog, perhaps in deference to the filmmaker now gutting Abel Ferrara) does order his soldiers to “arise” from the snow. But wouldn’t these zombies be infinitely more interesting if they tried to mimic behavior from World War II? It’s too easy to have the zombies simply hunt down these kids for gold. This movie might have had real guts — pun fully intended — if these Nazis attempted to carry out the Final Solution.

Of course, any horror movie that stops for a moment of Norwegian hospitality — with coffee unappreciated by the guest — can’t be entirely discounted. Wirkola himself is a hospitable filmmaker and he’s off to a good start. It’s just too bad that he isn’t nearly as cavalier as Don Edmonds — the wild director of the first two Ilsa films who passed away only a few weeks ago. With such audience-friendly horror as Nacho Vigalondo’s Timecrimes and Sam Raimi’s Drag Me to Hell seen in theaters in the past six months, Wirkola is going to have to work harder to make schlock horror fun and dangerous again.