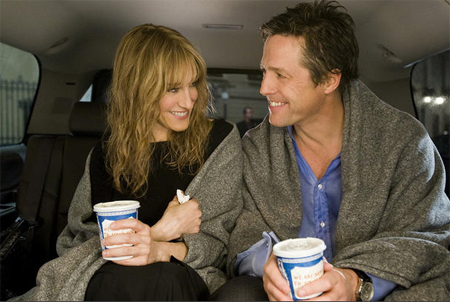 Sometime ago, I attended a screening for Did You Hear About the Morgans? I apologize for the lateness of this review. I have been occupied with more important things, such as clipping my toenails. I wish I could review this film properly, but that would be a bit like putting together a 4,000 word essay devoted to one man’s case of athlete’s foot. The upshot is that there is truly not much to recommend about this film, although I have seen worse films and this braindead offering served as a diversion between deadlines. It was possessed of nothing and permitted my mind and spirit to become actuated, seeking fun and greater things.

I should probably note that Susan E. Morse, fired by Woody Allen sometime after The Curse of the Jade Scorpion (possibly one of the key reasons why Allen’s more recent films have been less than stellar), edited the film. But aside from this, I leave the readers to do the detective work and track down the cast and crew. They are, for the most part, not worthy of having their names repeated here. But I do feel bad about what happened to Susan E. Morse, even though Woody Allen needs her more than Morse needs Woody Allen. What follows are some of my random notes taken throughout the film. This is what is known as a lazy review. But since the filmmakers have been extraordinarily lazy in putting this film together, it makes considerable sense for me to afford it the same level of disrespect. The collected notes will provide content for this site while I do interesting things (such as clipping my toenails) and it may be of some use to those who, for whatever reason, are still on the fence about seeing this movie:

“The perfect combination of classic architecture and understated elegance.” — some statement explaining this film?

He slept with someone else. A little less love for a while. Many years. Preposterous murder subplot. Really, this kind of crime in the East Side? Did the writer even visit here?

Couple across the street looking through window. Liked this the first time in Ghostbusters, possibly before. “There’s an emergency.” Gay subtext in shower. Attorney with loads of free time in New York? Yeah, right. “I’ve had bagels in other parts of the country. I don’t even like Connecticut.” Such appeal! Will the killer shoot these snobs?

“If you want to lie, you’re out of options.” Manichean approach. Couple acts like they are in their twenties. Was that original script before getting Hugh and SJP?

A week at most. Sam Elliott kicks ass. Mary Steenburgen kicks ass. But why is there no chemistry between SE and MS? Wyoming. Cliches. City Slickers-style music.

Taxidermy. Encounter with a grizzly bear. Shouldn’t he be writing this down? Bargain Barn. “It’s huge. I had no idea.” But New York has Costco! Big guns. PETA. People for Eating Tasty Animals. Heard that joke in redneck bowling alley in early 1990s. Stilted blocking. Trapped.

One room. One witness at a time. Ten years ago. John Wayne and Clint Eastwood mostly. Cliched DVD selection. A computer. Make a quick call. There’s a code.

“And I don’t trust you anymore.” Paul or screenwriter?

Rodeo Round-Up magazine. All meat in the fridge. Who plays the assistant? “I’ve never turned my oven off.” “I thought I could actually keep my cells dividing.”

“I feel my organs shutting down.” “I can’t breathe. The air’s too clear.” Grizzly bear. Spraying him in the eyes. “I’ve always dreamed about Chicago.” “Laughter really is the best medicine.” Thank you, but I’m waiting to laugh.

“Without him, I’m superfluous.” Oh please. Someone get bell hooks on her ass.

Shooting at the audience. “This is nothing. You should see how long it takes for her to order dinner.” Quicker than this movie?

“I think I have a welt.” Too much typing, Mr. Screenwriter?

Chair — moving inside the house.

“I am told that it is the only place.” Remington 270. “I called around and got a table near the mayonnaise.” New York neurotics. Wilford Brimley smoking. Cast as a badass! Beat them up, Wilford! Liberals in town: “Thirteen, not fourteen, and we know who they are.” People take trucks in this town? Truck return policy? “I Googled her.” — one of several modern references placed in at last minute, if script sitting in drawer.

Smells like a burrito. Need a will. Stun gun. “It is an ever-fixed mark that looks on tempests and is never shaken.” Which Shakespeare sonnet is this again?

Wait a minute, he’s British and been in New York all this time? Google Maps. Google paid someone?

“You risked your life for me. That’s so nice.” Barf.